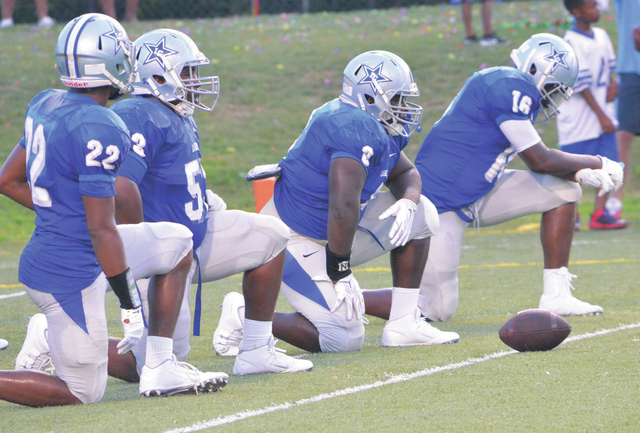 LAGRANGE – The Callaway Cavaliers had the ball first at the start of the second half of Friday’s game against LaGrange, and they were hoping to take a bite out of their nine-point deficit.

LaGrange had a different plan.

The Cavaliers’ first play of the second half resulted in a fumble, with LaGrange’s Emmanuel Mann falling on the ball just five yards from the end zone.

After LaGrange scored a touchdown, Callaway got the ball back down by 16 points and desperately needing to put something together.

Instead, the first-down play on an attempted reverse resulted in a 10-yard loss.

On the following play, Callaway quarterback Braylon Sanders dropped back, and he faced tremendous pressure from LaGrange’s defensive front.

Sanders got the ball away before he was tackled, but he was called for an intentional grounding penalty, and LaGrange was awarded a safety.

The man who wrapped Sanders up and forced him to throw the ball prematurely was Mann, who is the leader of the defensive line.

The safety gave the Grangers 24-6 lead, and they didn’t look back.

When Jeremiah Wright returned an interception for a touchdown with 4:48 left in the third quarter, the Grangers had a 38-6 lead, and they’d scored 30 consecutive points.

LaGrange went on to claim a 45-20 victory to get their season off to a rousing start.

There were a lot of reasons LaGrange won the game, and one of the big ones was the performance of the defensive linemen, including Mann.

Mann had a big night that included five tackles, a sack, the quarterback pressure on the safety, and the fumble recovery that got the ball rolling in the second half.

Callaway had its share of offensive success in the game, with running back Cedric Maynard running for more than 150 yards, but it was still a solid effort by LaGrange’s defense.

Seven of Callaway’s first eight offensive possessions didn’t yield any points, and by the time Maynard went 56 yards for a touchdown late in the third quarter, LaGrange’s lead was 38-6 and the outcome was all but decided.

Mann said the hard work he and the other defensive linemen have been putting in paid dividends Friday night.

The Grangers were hit hard by graduation on the defensive line following the 2014 season.

There was only one starter slated to return, and that was Mann.

Mann knew he was going to be counted on to not only produce on the field, but to be a leader as well, and he has embraced that.

“It’s an honor, to have guys looking up to me,” Mann said. “You have to be the person to step up and lead the group. That’s what I’m doing.”

LaGrange head coach Dialleo Burks knows what Mann is capable of, and he let him know at halftime of the Callaway game that he needed to provide more of an impact.

“We had to challenge him in a Granger way,” Burks said. “We expect a lot from those guys. He’s a four-year starter. We expect a lot. There are certain things we are not going to accept. He came out flat the first half. I just told him, you’re supposed to be a college football player, so play like it.”

How did Mann respond?

He started the second half by recovering a fumble and forcing an intentional-grounding penalty for a safety.

Now Mann will turn his attention to another county rival, the Troup Tigers.

Mann has had to watch Troup celebrate a victory the past two years, and he would obviously like to flip that script this season.

“It’s my senior year. I want to go out fast playing the cross-county team,” Burk said. “It’s Troup. It’s our biggest rival. I just want to win the game.”