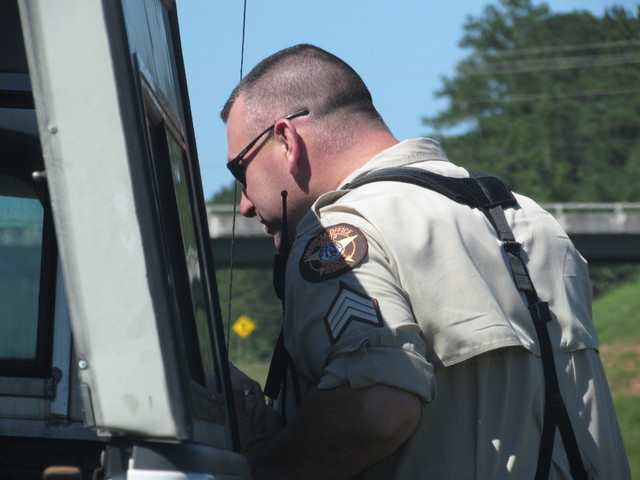 http://lagrangenews.com/wp-content/uploads/sites/37/2015/08/web1_WEB0827Taylor1.jpgTroup County Sheriff’s Office Sgt. Nathan Taylor stops a motorist along one of Troup County’s busy interstates. Taylor is the head of the narcotics and K9 divisions at the Troup County Sheriff’s Office. He and his Dutch shepherd, Biko, regularly patrol I-85 and I-185 trying to catch drivers committing moving violations and looking beyond the traffic stop to see what else motorists might be hiding, such as drugs.

Reporter’s note: This story chronicles part of my experience as I rode along Troup County Sheriff’s Office Sgt. Nathan Taylor as he patrolled the county’s two main interstates. While the main topics we started discussing focused on speed and drug trafficking, the more information he shared about *who* and * what* was actually traveling up and down those roadways. Details that can be invaluable for any motorists passing through Troup County.

TROUP COUNTY — The Daytona 500 speedway may not be up to par when it comes to driving on Troup County’s two main thoroughfares known as interstates 85 and 185.

Just getting on this “racetrack” can be a nerve wracking endeavor for any motorist, motorcyclist or commercial driver trying to travel north or south to their destination. Once you are on the U.S. version of the Autobahn, hang on, it could be a fast and wild ride.

“The speeders around here are off the chain,” said Sgt. Nathan Taylor.

Taylor is head of the narcotics and K9 divisions at the Troup County Sheriff’s Office. He and his partner, Biko, a Dutch shepherd, are a team all their own, not only taking illegal drugs off the county’s interstates and roadways, but cracking down on law-breaking, moving violators too.

“The common violations I see are speeding and following too closely. People don’t pay attention to that,” Taylor explained. “Those are the top two reasons for traffic crashes. A driver should be one car length away for every 10 miles per hour. You’ll see cars less than that going 70 miles per hour.”

But 70 miles per hour is pretty modest compared to the speeds Taylor typically clocks people at while they race up and down I-85 and I-185. The radar captured motorists running 80 or higher on the interstate. One motorist Taylor stopped was traveling 96 miles per hour in the northbound lanes of I-85.

That’s nothing, Taylor said. One day he remembered clocking one driver traveling 127 miles per hour down the interstate.

Along with the standard radar detector and laser for monitoring passing motorists’ speeds, Taylor’s SUV is also equipped with an automatic license plate reader, or ALPR.

According to Taylor, the device checks a car’s tag and can tell almost immediately if the tag is suspended or stolen, if the vehicle is stolen, if the insurance on the car has been suspended, if the owner of the car is wanted by law enforcement or if there has been an Amber Alert issued for someone in that vehicle.

According to the Virginia State Police, the license plate reader was critical in helping troopers Wednesday morning locate the car of shooting suspect Vester Lee Flanagan, a.k.a. Bryce Williams, just hours after he allegedly shot and killed two TV journalists on air and wounded a third woman.

That system also came in handy for Taylor on Tuesday evening when it alerted him to a Nissan Sentra traveling in the southbound lanes of Interstate 85 with a stolen license plate.

He raced to catch up to the driver, who claimed another family member put the plate on the back of her car. She said she had no idea it was stolen.

Taylor confirmed the plate had been stolen from a car dealership in Cobb County, but would have to investigate further to learn if the woman knew and willingly took possession of the stolen plate. He let her go, but with a stern warning and four tickets: one for expired registration, one for affixing a license plate with intent to conceal or misrepresent, and two tickets for child restraint violations because both of her young children were not properly restrained in their safety seats.

Taylor also removed the stolen tag from the back of her car to place in TCSO’s evidence locker. He said the woman may face criminal charges at a later date.

The trained narcotics agent was quick to point out that a routine traffic stop could turn into something more dangerous or complex in a heartbeat.

Taylor is trained to look beyond the moving violation and discover if there is something more sinister hiding inside the car or on the driver themselves.

It was the same instinct that kicked in the morning of Aug. 3 when he stopped a van for a window tint violation and speeding on the southbound lanes of I-85. A distinguishable odor of marijuana peaked Taylor’s interest, and after searching the vehicle, the trained narcotics agent discovered 11 pounds of suspected “high-grade” marijuana, at least 40,000 tablets of Xanax and 1,000 Percocet pills in the rear cargo area of the van.

The Troup County Sheriff’s Office estimated the alleged drugs are worth nearly $454,000.

According to TCSO, it is the largest reported prescription pill seizure made during a traffic stop in county, state and U.S. history.

“When you see someone’s heart is about to beat out of their chest, their hands are shaking and they are overly nervous … when I see that, I know that it’s time to look beyond the traffic violation and into what could be causing that person to be so nervous,” Taylor explained.

“Or we may walk up and smell marijuana inside the car,” he continued. “With drug traffickers, there are certain questions I can ask that I can figure out if they’re transporting illegal drugs. There are indicators, that (for safety and professional reasons) I can’t go in to, that let me know there’s something going on (inside the car.)”

Taylor said he, along with the numerous other law enforcement officers who patrol Georgia’s interstates, are criminal interdiction officers. It is up to them to try and stop or prevent crimes that may be occurring, whether that is speeding down an interstate, trafficking drugs, drinking and driving, or human trafficking.

But none of that will cease unless Taylor and others see beyond the tons of steel and glass, plus the shreds of truth and lies to find what truly lurks on the other side.

“Out here (on the interstate) you’re dealing with people from all walks of life,” he explained. “Gang members, suspected murderers, bankers, lawyers, the cartel … they (cartel) use the interstate system, especially I-85, to transport their drugs because Atlanta is a hub.

“The interstate system is used for anything: commuting, traveling or smuggling contraband into the U.S.,” Taylor continued. “Our job is to ensure the safety of the legitimate travelers and to detect, locate, successfully apprehend and, when it comes time, help prosecute them for their crimes.”