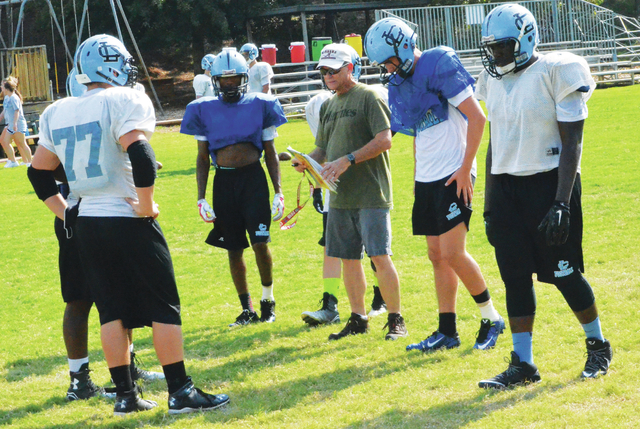 LAGRANGE – They’re going for two in a row.

The Lafayette Christian School Cougars, after last week’s 35-22 win over Appling Christian in the season opener, will hit the road today to take on Solid Rock Academy.

Lafayette Christian head coach Nate Shaw said it will be a different sort of challenge from last week.

“It’s going to be a totally different style of play from Appling Christian,” Shaw said. “They were ground and pound. (Solid Rock will) try to put it up a little bit more, and they’re going to be faster. I’m not sure if they’ll be as big and strong.”

While the final score seems to indicate it was a somewhat competitive game, it wasn’t.

Lafayette Christian led 28-8 after the first quarter, and it was a 35-8 game at the half.

With the game in hand, Shaw substituted liberally, and Appling Christian scored a pair of fourth-quarter touchdowns to make the final score more respectable.

Until the fourth quarter, Appling Christian’s only touchdown came on a kickoff return in the first quarter.

The Cougars scored less than a minute into the game when quarterback Sam Marshall hit Jemi Reed for a 46-yard touchdown pass.

Also in the first quarter, Reed had touchdown runs of 11 and 55 yards, and Marshall scored on a 1-yard keeper.

In the second quarter, Marshall threw an 11-yard scoring pass to Antavious Sands.

Marshall did a terrific job running the show, and Reed and Eli Shepherd provided a terrific tandem at running back.

Reed is a speedster with the ability to pull away from defenses, and Shepherd is a powerful runner who is extremely difficult to bring down.

“We can go thunder and lightning,” Shaw said. “(Shepherd is) a load to bring down, and Jemi can run.”

“He’s not as fast, but he is strong as an ox and he is hard to bring down,” Shaw said.

After today’s game, Lafayette Christian will take next week off before visiting Harvester Christian on Sept. 11.