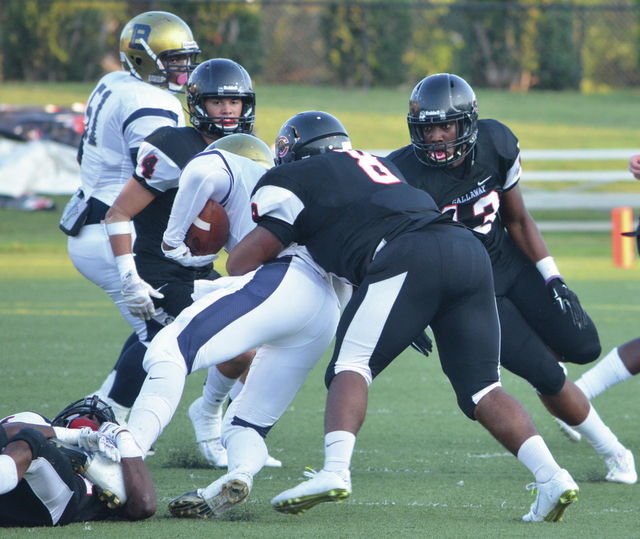 Callaway’s Cedric Maynard is congratulated after one of his two touchdown runs. Kevin Eckleberry | Daily News

http://lagrangenews.com/wp-content/uploads/sites/37/2015/08/web1_8-28-maynard2.jpgCallaway’s Cedric Maynard is congratulated after one of his two touchdown runs. Kevin Eckleberry | Daily News LAGRANGE – That’s one for the win column.

The Callaway Cavaliers bounced back from a disappointing opening-night loss to LaGrange to beat an always tough B.E.S.T. Academy team 30-14 on Thursday night at Callaway Stadium.

B.E.S.T has proven to be a challenging opponent the past few years for Callaway.

In 2013, when the Cavaliers went 12-2 and reached the state semifinals, they were pushed to the limit at home before beating B.E.S.T. 28-18 in what turned out to be their most competitive region game of the season.

A year ago, Callaway traveled to Atlanta for a non-region game.

In another hard-fought game, B.E.S.T. scored a touchdown in the final minute to beat Callaway 14-7.

So it was no surprise to see B.E.S.T. once again giving Callaway a hard time of in Thursday’s game.

The Cavaliers were plenty good enough to come away with the win, though.

Maynard had touchdown runs of 69 and 33 yards in the first half, and he finished with more than 200 yards on the ground, and he has close to 400 yards through the first two games combined.

Braylon Sanders, who was making his second career start at quarterback, did a nice job of leading the offense, and he had a pair of touchdown runs while enjoying an efficient passing day.

Callaway’s defense delivered a solid performance against a B.E.S.T. offense with a lot of weapons.

One of the leaders of that defense was defensive lineman JT Wortham, who had a tackle in the end zone for a safety.

Callaway also got a 30-yard field goal from Noah Stephens in the game’s closing moments.

It was a nice bounce-back effort for the Cavaliers, who fell to the Grangers 45-20 in their season opener last week.

“When we got back to the school (after the LaGrange game), we just started thinking to ourselves how we’ve got to push ourselves and work hard,” Maynard said. “We did what we had to do in practice.”

Sanders said no one was hanging their heads after the difficult game against LaGrange.

“We just go hard in practice every day,” Sanders said. “We just work to get better every day in practice.”

After falling behind 27-6, B.E.S.T. got a long touchdown pass and a two-point conversion to get within 13 points with 7:27 left in the third quarter.

Callaway’s defense bucked down from there, though, and didn’t allow B.E.S.T. to come close to the end zone the rest of the way.

“The defense played fast,” Callaway head coach Pete Wiggins said. “B.E.S.T. has got a good football team. Coach (Joshua) Moore does a great job with his kids, and I have a lot of respect for him.”

The Cavaliers went 78 yards for a touchdown on their first possession of the game, and they continued to move the ball well the rest of the game.

While Maynard did a lot of damage and was basically unstoppable, Sanders looked comfortable running the offense.

Sanders not only had the two scoring runs, but he had some big completions to Devin Brock, Joe Brown and DQ Wilkerson.

“That was Braylon’s first start at quarterback (against LaGrange),” Wiggins said. “Again, each week he’ll get more confidence, and I’m really proud of the way he ran the offense tonight, and I was proud of the guys up front. They did a good job with our blocking assignments, and our backs ran hard.”

Callaway’s offense was sharp from the get-go.

After B.E.S.T. punted on its opening possession, Callaway took over at its own 22-yard line.

On second down, Maynard had a 26-yard run to get the ball to midfield.

On third-and-long, Brock made an outstanding diving catch for a 17-yard gain to the B.E.S.T. 35-yard line.

Wortham, who plays mostly on defense but also contributes occasionally on offense, had a 10-yard run later in the drive to the 9-yard line.

Maynard nearly scored on the next play, but he was brought down just short of the end zone for an 8-yard gain.

On the next play, Sanders scored on a 1-yard keeper, and Stephens made the extra point to give Callaway a 7-0 lead with 5:46 left in the opening quarter.

That’s the way it remained until Callaway got the ball at its own 31-yard line moments into the second quarter following a B.E.S.T. punt.

The Cavaliers’ second scoring drive was a bit shorter.

On the first play of the possession, Maynard took the handoff from Sanders, and he got outside of the B.E.S.T. defense and turned the corner and out-ran everyone for a 69-yard touchdown run to give Callaway a 13-0 lead with 11:22 left in the half.

B.E.S.T. was driving and in Callaway territory when DQ Wilkerson made a terrific play.

After a B.E.S.T. player made a catch, Wilkerson stripped the ball and recovered the fumble.

The Cavaliers couldn’t move the ball, though, and they were forced to punt.

B.E.S.T. then showed off its big-play ability.

Sophomore quarterback Nakia Davis heaved the ball downfield, and Deshant Hester made the catch in coverage and ended up scoring on a 61-yard catch.

Callaway responded with a touchdown of its own.

After Maynard gave his team good field position at its own 40-yard line with a nice kickoff return, the Cavaliers went 60 yards in five plays for the score.

After Sanders completed a 14-yard pass to Brown, Maynard did his thing once more.

Maynard broke a handful of futile tackle attempts at the line of scrimmage, and he ended up going 33 yards for the touchdown.

Callaway’s defense put the final points of the first half on the scoreboard.

Davis dropped back to pass, and Wortham brought him down in the end zone for a safety, allowing Callaway to take a 21-6 lead at the half.

The Cavaliers got the ball first at the start of the second half, and they went right back to work, going 89 yards for the touchdown.

The drive was jump-started with a 35-yard completion from Sanders to Wilkerson near midfield.

Later on the drive, Sanders hooked up with Brown on a 26-yard completion.

After Maynard’s 8-yard run, Sanders scored from five yards out on the next play, and it was a 27-6 game.

B.E.S.T. came right back moments later, with Robert Tucker catching a Davis pass for a 62-yard touchdown, and it was suddenly a 13-point game.

After the Cavaliers took over at their own 48 after a B.E.S.T. punt, Maynard had a 12-yard run to get things started.

With Maynard getting a break, Tyrek Frazier got some work at running back, and he responded with runs of four, 14 and six yards to get the ball to the B.E.S.T. 11-yard line.

The drive stalled, but Stephens converted the 30-yard field-goal attempt, and Callaway led 30-14 with 2:14 to play.

B.E.S.T. went three-and-out and punted on its ensuing possession, and Callaway ran a couple of kneel-down plays, and that was that.

Callaway will look to move to 2-1 when it visits Heard County next Friday.