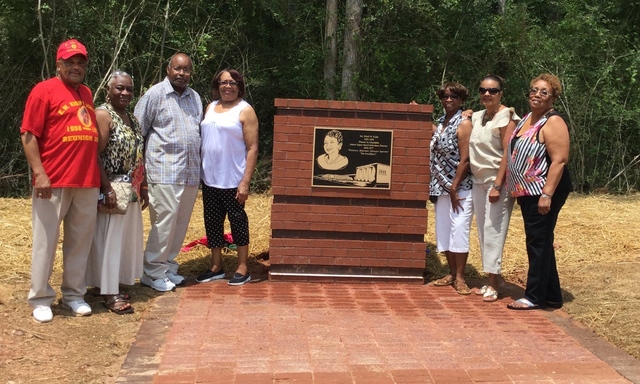 Members of the Kight Memorial Committee stand with the finished memorial.

http://lagrangenews.com/wp-content/uploads/sites/37/2015/08/web1_WEB082515-Ethel-Kight.jpgMembers of the Kight Memorial Committee stand with the finished memorial.

LaGRANGE — Members of the Ethel Kight Memorial Committee have ensured that the late educator’s legacy will be remembered through a monument at the rebuilt elementary school named in her honor.

In July 2014, Albert Gilliam got a call from former Georgia Rep. Carl Von Epps, the nephew of Ethel Kight. They discussed the tearing down of the old Ethel Kight elementary school and agreed that a memorial to the late “Miss Kight” should be built along with the new school to ensure her legacy. From there, they formed a committee and took action.

“We’re proud of the impact that Aunt Ethel had on the educational system,” said Epps. “Her students recognize the contributions she made to their growth and development.”

Kight was the Jeanes supervisor — part of a program to fund education for black schools — in Troup County before integration in 1970, and she later was curriculum director for schools. The school was named after her in 1956. Her name was taken off the school in the 1960s, but was reinstated in 1996 and now transferred to the new building.

Epps went on to say that the monument is significant because it shows that so many people recognize the benefits Kight contributed in their education.

Gilliam contacted other members of his class, former faculty and staff, as well as friends of Kight, and pitched them the idea. Thirteen jumped on board as committee members, with Gilliam as chairman, and started to put the plans into action.

“She was a very special lady,” said Garfield Herald, co-chairman of the committee. “The thing that I like about the memorial is that a lot of the younger generation doesn’t know what she meant to the community, to Troup County. She really was the pioneer for a lot of the young black kids and parents from the ’50s and ’60s that really helped us to get where we are now.”

Their initial goal was to sell 200 etched bricks to fund the project. The response was so great that, in no time, they sold over 220.

“I’m most proud of it,” said Gilliam of the accomplishment.

Class members from Kight’s 1956 to 1970 active years were quick to respond and make the memorial happen. Each brick was sold at $50. Some bricks were donated by the Troup County Board of Education from the new school’s leftover construction.

The committed also ordered a 20 inch by 24 inch plaque with instructions to feature the likeness of Kight and the old school.

“We had a line in our alma mater that ‘Kight School lives on through eternity,’” Gilliam said. “With this memorial we hope that Miss Kight’s legacy continues for generations and generations to come.”