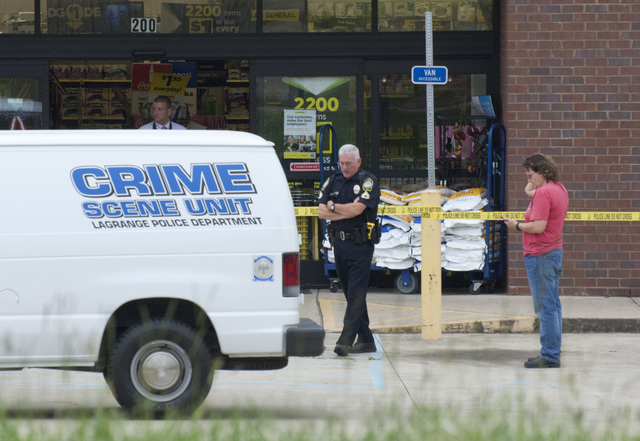 LaGRANGE — A clerk at a discount general store was robbed at knifepoint shortly before 9 a.m. today in south central LaGrange.

The suspect entered the Dollar General at 200 Colquitt St. around 8:45 a.m., approached a clerk and stuck a knife to her abdomen while demanding money, according to Ley Wynne, a LaGrange police detective on the scene. The robber took an undisclosed amount of cash.

Described as a light-skinned African-American male in his late 20s, the suspect fled on foot after the robbery, Wynne said. No one was injured, although the clerk was visibly upset at the scene.

There were no customers inside the store at the time, according to senior LaGrange police officer Norm Wynne. He also said someone in the parking lot outside the store allegedly saw the robber holding a black handgun.

Police crime-scene tape cordoned off the store this morning as police detectives and patrol supervisors combed the inside of the store. Ley Wynne said a surveillance camera was operating inside the store at the time of the robbery.

Anyone with information regarding this armed robbery should contact LaGrange police at 706-883-2603. Tips may be submitted anonymously to Troup County Crime Stoppers at 706-812-1000.