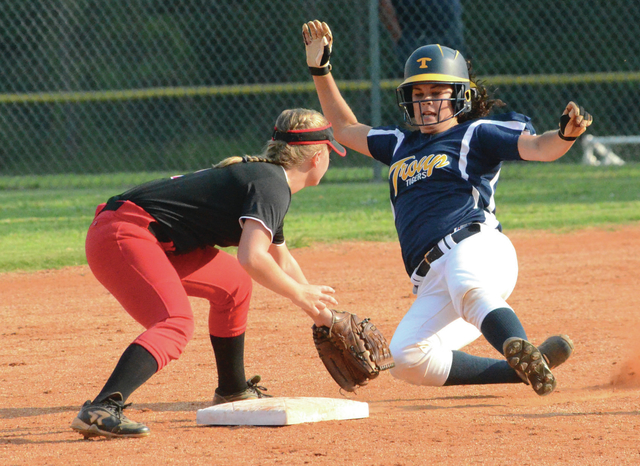 Troup’s Maddie Weathers slides into second during Thursday’s game. Weathers was tagged out on the play, but Troup went on to win 9-0. Kevin Eckleberry | Daily News

http://lagrangenews.com/wp-content/uploads/sites/37/2015/08/web1_8-28-softball31.jpgTroup’s Maddie Weathers slides into second during Thursday’s game. Weathers was tagged out on the play, but Troup went on to win 9-0. Kevin Eckleberry | Daily News

LAGRANGE – Well that was impressive.

In a matchup of two teams that made the state playoffs a year ago, the Troup Lady Tigers took charge with four runs in the first inning, and they never looked back on the way to a 9-0 victory over Woodward Academy in a game that ended after five innings because of the run rule.

“They played well,” Troup coach Blair Shimandle said. “They hit the ball well. It was nice to get the win in region. Overall, it was a really good game, a fun game.”

Hanna Lane threw five shutout innings and was the winning pitcher, and Troup pounded out 10 hits.

Amber Arnold got it done from the leadoff position, going 2-for-2 with two runs scored and four stolen bases.

Lane helped herself by going 2-for-2 with two RBIs, and her sister, freshman third baseman Kayla Lane, had a hit and two RBIs.

Madison McCartney had a big day with two hits with a double, a triple and three RBIs, Abby Taylor had a hit, a walk and two runs scored and two stolen bases, Maddie Weathers had a hit and a walk, and Libby Wheeler had a hit.

Troup is off to a quick start in region play, and Shimandle believes this team is well-equipped to keep things rolling.

Troup took charge with four runs in the bottom of the first inning.

After Arnold was hit by a pitch leading off, Hanna Lane walked, and Kayla Lane followed with an RBI single.

Another run scored when Kinley Stanford reached on an error, and McCartney knocked in two more runs with a triple.

Troup scored another run in the second inning.

Abby Taylor walked, Arnold reached on a single, and Hanna Lane delivered an RBI hit to make it 5-0.

In the third inning, McCartney’s RBI double pushed the lead to 6-0.

Troup scored its final three runs in the bottom of the fourth.

Taylor legged out an infield single leading off, and Arnold followed with a base hit.

Hanna Lane came through with an RBI single, and Kayla Lane capped the scoring later in the inning with a sacrifice fly.

Woodward Academy got a triple in the top of the fifth, but Hanna Lane buckled down and didn’t allow a run to score to secure the shutout.