Callaway’s Maynard has been running free 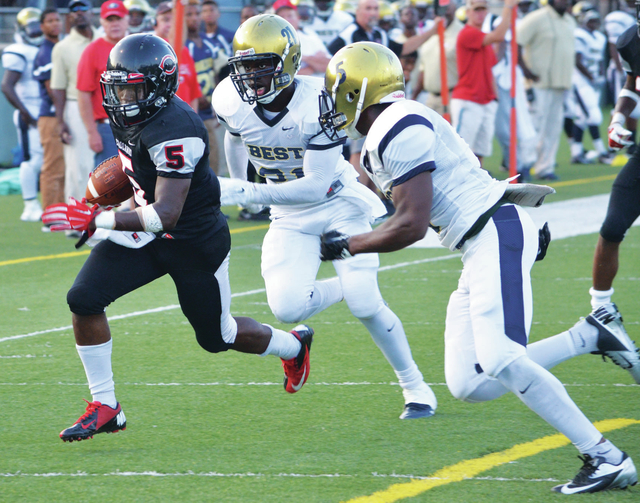 Callaway’s Cedric Maynard had 250 yards rushing in Friday’s win over B.E.S.T. Academy. In his first two games, Maynard has 417 yards, and he is averaging 11.9 yards per carry. Kevin Eckleberry | Daily News

http://lagrangenews.com/wp-content/uploads/sites/37/2015/08/web1_8-28-maynard1.jpgCallaway’s Cedric Maynard had 250 yards rushing in Friday’s win over B.E.S.T. Academy. In his first two games, Maynard has 417 yards, and he is averaging 11.9 yards per carry. Kevin Eckleberry | Daily News

On Callaway’s first offensive possession of Thursday’s game against B.E.S.T. Academy, senior running back Cedric Maynard’s number was called, and he fought his way for a 3-yard gain.

On second down, Maynard got the ball again, and this time he beat the B.E.S.T. defense for a 26-yard run, putting the ball at midfield on what turned out to be a 78-yard touchdown drive.

It was that kind of night for Maynard, who has been dazzling through the first two weeks of the regular season, as well as the preseason game against Greenville.

Through two games, Maynard has more than 400 yards on the ground, and he has three touchdowns.

In the Greenville game, Maynard had two touchdowns, including a 70-yard run on the Cavaliers’ first offensive play.

It has been that kind of season for Maynard, who is thriving in his first season as a starter after backing up Eddie Culpepper the past few years.

“Cedric’s a really strong kid,” Callaway head coach Pete Wiggins said. “He’s got an explosiveness about him, and he comes to work every day at practice. He’s been a big part of what we do for four years now.”

Although Maynard hasn’t been an offensive starter before this year, he has been a big part of the offense and has gotten plenty of playing time.

“He’s played behind Eddie, but he’s taken a lot of snaps, and he’s made a lot of big plays,” Wiggins said. “I’m really proud of his effort and his leadership that he’s displayed.”

In a season-opening loss to LaGrange, Maynard was a bright spot.

Although he only carried the ball 14 times, he ran for 167 yards with a 56-yard scoring run in the second half.

“I tell my O-line to block, and do what they’ve got to do, do their best, and I’ll do what I’ve got to do,” Maynard said after Friday’s win.

“We all work together,” Maynard said. “It’s not my myself. I’m a team captain. We learn, and we push each other harder and harder just to get better. It’s a partnership. We’re working hard.”

Maynard was far from the only offensive bright spot in Friday’s game.

Braylon Sanders, who was making his second career start at quarterback, had touchdown runs of one and five yards, and he did a nice job throwing the ball as well with completions to Joe Brown, DQ Wilkerson and Devin Brock.

While Maynard was obviously the focal point of the running game, Tyrek Frazier had some nice runs late, including a 14-yard carry that set up Noah Stephens’ 30-yard field goal.

Fullback Brandon Boddie did a nice job blocking and also had some carries for positive yards, and JT Wortham had a 13-yard carry on the opening drive that led to a touchdown.

“That was Braylon’s first start at quarterback (against LaGrange),” Wiggins said. “Again, each week he’ll get more confidence, and I’m really proud of the way he ran the offense tonight, and I was proud of the guys up front. They did a good job with our blocking assignments, and our backs ran hard.”