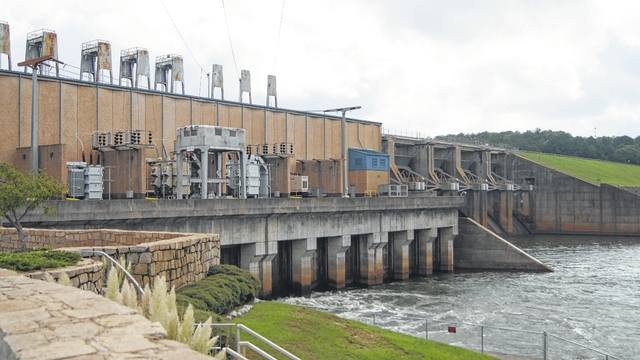 Dams like the one at West Point Lake control the Chattahoochee River’s flow rate as well as generate electricity. Some advocates worry a decision by the state Environmental Protection Division could cause a ripple effect in the current minimum flow rate and water levels for area water sources.

http://lagrangenews.com/wp-content/uploads/sites/37/2015/08/web1_WEB082915Chattahoochee6.jpgDams like the one at West Point Lake control the Chattahoochee River’s flow rate as well as generate electricity. Some advocates worry a decision by the state Environmental Protection Division could cause a ripple effect in the current minimum flow rate and water levels for area water sources.

LaGRANGE — Officials with the state said a move to modify language in a document concerning Chattahoochee River water flow is simply to clarify confusion, but local river advocates say the change could threaten water flow downstream of Atlanta.

The Georgia Department of Natural Resources’ Environmental Protection Division, or EPD, voted Tuesday to strike a footnote that officials say has caused confusion since the mid-1970s when it was written as a result of the Chattahoochee River’s classification change from industrial to fishery.

The footnote was created for the benefit of waste treatment facilities. It stated that if the minimum flow rate dropped below 750 cps they would not be held accountable for water quality.

The idea at the time was that less water flow through the Chattahoochee would equal less dilution of the wastewater, in turn forcing the wastewater facilities to be more responsible in their wastewater treatment practices.

According to Capp, since that time, wastewater quality, and in turn the quality of the Chattahoochee, has improved significantly.

“Forty years had passed and we have got a really beautiful river that has a lot of great qualities to it,” Capp said. “The river is a lot better than it was.”

But some see the change as a threat to the future of the Chattahoochee.

“This is starting the process for reduced flows for the Chattahoochee,” said Jason Ulseth of the Chattahoochee Riverkeeper. “The way that the EPD has packaged this revision is saying that this is just a minor striking of a footnote within the state water quality standards, but it has a lot of implications with striking this footnote because this number has been in place for the last 40 years and has served as the target flow rate for the Army Corps of Engineers.

“… It’s clear that intent of this revision is to lower flows of the Chattahoochee River. … But the bottom line is that this footnote in the water quality standards meant that engineers needed to release a certain volume of water from the Buford Dam in order to meet 750 cubic feet per second downstream of Lake Lanier.”

The chairman of the West Point Lake advisory committee, James Emery, seemed to think striking the footnote would help protect water quality in the future.

“The EPD’s intent in striking that footnote was good in that it could possibly help protect water quality more than it is currently protected,” he said. “However, there is this fear that not having this number, that 750 cfs that was in that footnote — and that’s the only place that number shows up anywhere in any state rules — and the fear is not having that number could somehow result in lower flows. If that happens, that could be detrimental to us. … Removing the footnote: I don’t see how it should be interpreted as meaning that we’ll get lower flows.”

Henry Jacobs, middle Chattahoochee outreach manager for the Chattahooche Riverkeeper, whose office is based in LaGrange, said the river’s ability to support communities and assimilate wastewater downstream of Atlanta are now “defiantly in jeopardy and compromised.”

“So basically there is nothing to say that they could release well below 750 cubic feet per second,” Jacobs went on to say. “And that means that the water treatment plants in the city of Atlanta and surrounding counties will still put in treated water, but treated wastewater that still needs to be assimilated by having enough water in the river to dilute (wastewater).”

In an emailed statement, West Point City Council member Gerald Ledbetter had this to say about the river’s importance on the city’s economy: “West Point has a very good relationship with the Army Corp of Engineers. They do a great job monitoring lake levels at West Point and making sure the flow below the West Point dam is adequate for West Point’s water needs, both for drinking water and for recreational activities, such and kayaking.

“They also take flood control very seriously, which is of tremendous importance to us! West Point is investing in additional river resources, like a new boat ramp alongside our existing kayak pad. And our new ‘Downtown River Park’ will be a great amenity for our residents, increasing river access and providing a wonderful space for outdoor events, like concerts, along the riverbank, as well as a central location for festivals and city-wide events.”

West Point city council member Sandra Thorton added: “The river is a critical contributor to our way of life and economy — affordable recreation for many, quality water to sustain our health and a support for jobs and our thriving industries.”

The Chattahoochee River — or the Hooch as some affectionately refer to it — travels over 400 miles through Georgia. It joins with the Flint River to dump into the Gulf of Mexico. The Chattahoochee River is controlled by 13 dams that generate hydropower and electricity, in addition to three lock-and-dam facilities. It is the second Southern-most trout habitat in the United States. Around 70 percent of Metro Atlanta’s drinking water.

Troup Transformation ‘angels among us,’ gives food to needy…