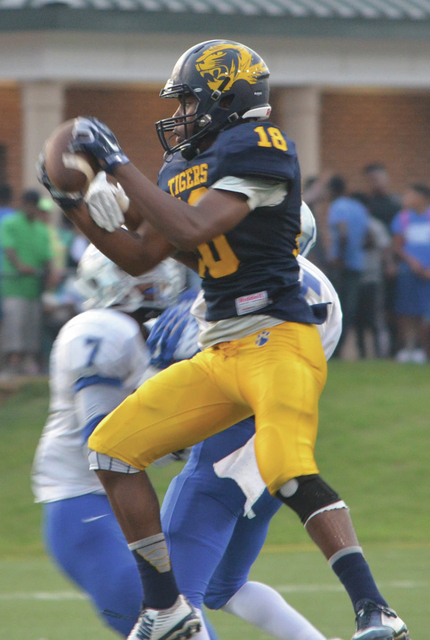 LAGRANGE – What a difference a year makes.

Last year this time, the LaGrange Grangers were licking their wounds after losing to the Troup Tigers 36-14.

That loss came on the heels of a heart-breaking 20-14 overtime loss to the Callaway Cavaliers the previous week.

Flash forward a year, and things are looking a whole lot sunnier for the Grangers.

After beating Callaway 45-20 last week, LaGrange wrapped up the county championship by handling Troup 35-7 on Friday at Callaway Stadium before a standing-room only crowd.

The Grangers, who improved to 2-0, ended a two-game losing streak to the Tigers.

“We’ve really worked hard,” LaGrange head coach Dialleo Burks said. “Once again, we’re still getting over those beginning of the season jitters. But we’re going to keep working, and we’re not going to stop. We’ll get better. I thought defensively we were better, a whole lot better (than last week). And our offense didn’t do bad, either. We took some shots. It was just a great game.”

The Grangers built a 14-0 lead at the half, and they scored touchdowns on their first three possessions of the second half to build a 35-0 lead.

Troup avoided the shutout with a Mess Bonner touchdown run late in the game.

It was Troup’s regular-season opener, and it was the debut for first-year head coach Tanner Glisson.

“It was tough. They beat our tail,” Glisson said. “I thought in the first half we maybe could have done some things to keep ourselves in the game. We left some things out there on the table in the first half, and that hurt us. We had a chance in the first half to make some plays, and we didn’t do it. When you get a chance to make a play, you’ve got to make it, and we didn’t make it. We could easily have been knotted up at 14, and maybe we would have come out in the second half and played with a little more intensity. Intensity wise in the second half, it was not good, and I’m going to take responsibility for that.”

Perry had touchdown runs of 29 and 19 yards, and he threw a 26-yard scoring pass to Mike Hardy.

Kimani Barnes got the scoring started with an 11-yard touchdown run, and Amad Ogletree had a 16-yard scoring run in the second half.

While LaGrange’s offense produced plenty of highlights, the defense delivered a dominant effort as well.

It was, Ogletree said, a team effort.

“Everybody did their part,” Ogletree said. “It was all of us, offense, defense, special teams and everything.”

LaGrange scored on its second possession of the game, with Barnes capping a 55-yard drive with an 11-yard scoring run, and Matthew Thomas made the extra point.

It remained a 7-0 game until LaGrange went 85 yards for a touchdown in the second quarter.

Perry got the drive started with an 18-yard run, and he later connected with Hardy for a 28-yard completion.

On the next play, Perry found Hardy in the end zone for a 26-yard touchdown pass, and Thomas’ extra point gave LaGrange a 14-0 lead.

In the second half, after Troup went three-and-out, Perry had a long punt return to the 19-yard line.

On fourth down, Ogletree took a handoff and scored on a 16-yard run, and Thomas made the extra point to extend the lead to 21-0.

The Grangers’ next possession began at midfield, and they needed eight plays to score again.

On a third-down-play, Perry beat the Troup defense for a 29-yard touchdown run, and Ogletree ran the ball in for the two-point conversion to make it a 29-0 game with 3:47 left in the third quarter.

After a Troup punt, LaGrange got the ball back at its own 42-yard line.

On the first play of the fourth quarter and on the seventh play of the drive, Perry showed off his quickness and elusiveness with a 19-yard touchdown run, and LaGrange led 35-0.

Troup’s lone scoring drive began with 8:20 left in the game.

Michael Young made the extra point to cap the scoring.