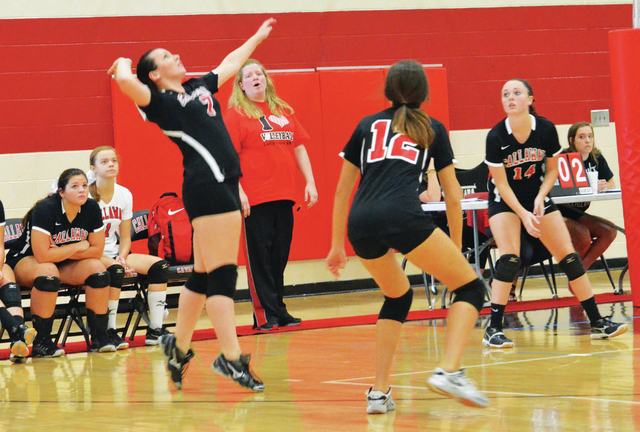 The LaGrange High volleyball team huddles before the start of Thursday’s match against Callaway. LaGrange beat Callaway and Opelika to improve to 6-0. Kevin Eckleberry | Daily News Players from Callaway and LaGrange meet at the net during Thursday’s match. LaGrange went 2-0 on the day, and Callaway was 1-1. Kevin Eckleberry | Daily News

http://lagrangenews.com/wp-content/uploads/sites/37/2015/08/web1_8-28-volleyball2.jpgPlayers from Callaway and LaGrange meet at the net during Thursday’s match. LaGrange went 2-0 on the day, and Callaway was 1-1. Kevin Eckleberry | Daily News The Callaway volleyball team bounced back from a loss to LaGrange to beat Opelika. Kevin Eckleberry | Daily News

The LaGrange High volleyball team has played six games this season, and it has won them all.

LaGrange got two of those wins on Thursday during a tri-match at Callaway High that included the host team, as well as Opelika.

Callaway, which began the day with the loss to LaGrange, bounced back for a thrilling win over Opelika to complete the day’s festivities.

After the teams split the first two sets, Callaway won the third and deciding set 26-24.

LaGrange has been rolling along nicely this season, and head coach Angie Newton said great team chemistry has a lot to do with that.

“We’re on a good streak right now. Hopefully it continues,” Newton said. “They’re playing really good. The biggest thing I think with this team is just the camaraderie.”

There are three seniors on the varsity team to go along with three juniors, two sophomores and four freshmen.

“It’s a good spread of kids. They all get along so well,” Newton said. “They like each other. They give each other a pat on the back and go on to the next play. I think that’s a big thing in sports. That’s what I’ve always wished for with my team. I’ve had it with some teams to a certain degree, but this team right here really complements each other, and do a great job of playing well together.”

Newton said her team played well during Thursday’s matches, particularly in the final set against Opelika.

After a somewhat competitive first set, LaGrange blew Opelika off the court in the second set.

“We were neck and neck all the way (in the first set), and then they pulled through at the end,” Newton said. “In the second set, they just came alive. That was some of the best playing from a team that I’ve seen in a long time. They just played really phenomenal right there at the end.”

After LaGrange and Opelika played, it was Callaway’s turn to play Opelika, and it was a tight one.

Callaway won the opening set 25-20, but Opelika evened things up by winning the second set 25-22.

In the third set, it was back and forth, and it was tied 24-24 when Callaway won the final two points to secure the victory.

“We worked very hard this week during practice, specifically with communicating with each other,” Smith said. “I was very happy.”

“She had some good hits and digs in that game,” Smith said.