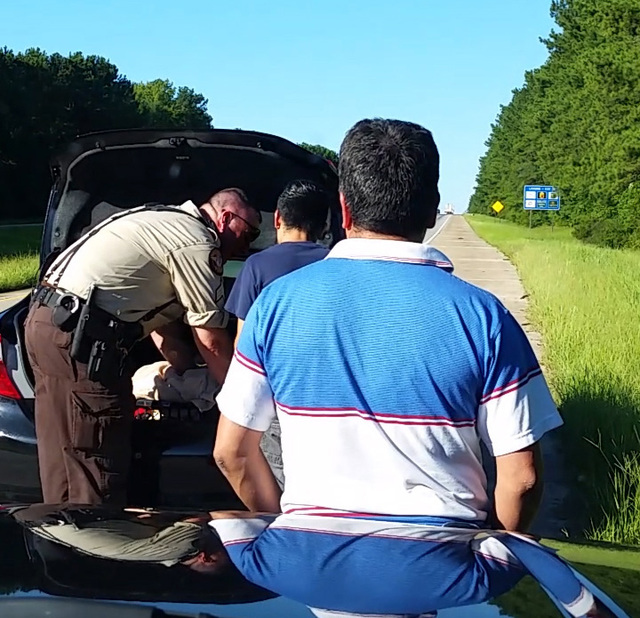 Troup County Sheriff’s Sgt. Nathan Taylor searches the back of a Toyota Camry for possible drugs or contraband. Taylor is the head of TCSO’s narcotics and K9 divisions. While this stop yielded no illegal narcotics, Taylor said he usually catches drug traffickers on interstates 85 and 185 in Troup County during routine traffic stops.

http://lagrangenews.com/wp-content/uploads/sites/37/2015/08/web1_WEB0830DrugsOnRun1.jpgTroup County Sheriff’s Sgt. Nathan Taylor searches the back of a Toyota Camry for possible drugs or contraband. Taylor is the head of TCSO’s narcotics and K9 divisions. While this stop yielded no illegal narcotics, Taylor said he usually catches drug traffickers on interstates 85 and 185 in Troup County during routine traffic stops.

Reporter’s Note: This is the second part in a series chronicling my ride along with Troup County Sheriff’s Office Sgt. Nathan Taylor and his K9 partner, Biko. Taylor is the head of TCSO’s narcotics and K9 divisions. While the first article, “Beyond the traffic stop” (Thursday, Aug. 20 edition) focused on interstate speeders, this piece concentrates on drug trafficking and what really may be lurking in the car, van or tractor trailer traveling next to you.

The second was the fact that the car was extremely too close to the bumper of the vehicle ahead of it.

As if that wasn’t cause enough, the third thing that peaked Taylor’s interest was the sound of the alarm of his automatic license plate reader, or ALPR, inside his SUV telling him the license plate was registered to an individual, not a business or company.

A lot of blue lights and less than a minute later, Taylor had the car pulled over to the side of the road.

Taylor said inside the car were three people: two passengers and a driver — and according to the trained narcotics agent, all of them were extremely nervous.

He spoke to each one separately and said their travel itinerary did not make sense. One of the passengers claimed he hailed a “cab” out of Atlanta to drive him to Montgomery, Alabama, and back for $200.

Taylor said recently there had been a lot of narcotics being moved up and down I-85 from Montgomery to Atlanta.

Add in the fact that one passenger’s phone would not stop ringing and the driver was so nervous she had to sit down on the grass along the side of the interstate — among other factors not made available for safety precautions — and Taylor believed he had enough suspicion to search the vehicle for contraband like narcotics, drug paraphernalia, weapons, large amounts of cash and more.

He asked permission from the driver and was granted consent. Taylor also called for a backup unit to watch the three travelers while he combed through the vehicle.

After carefully inspecting every nook and crevice on the exterior of the Camry, he moved to the interior and repeated the same procedures. Taylor took his time, looking inside every compartment and checking for any hidden sections before moving on to the trunk of the car.

Inside, he found mountains of suitcases that belonged to the passenger whom claimed to have rented the cab. Taylor opened each one, unfolded clothes, scrutinized every item and asked the passenger several questions.

The search came up empty for any illegal items, and he sent the travelers on their way with a stern warning.

But Taylor said traffic stops along interstates 85 and 185 is usually how law enforcement officers are seizing illegal narcotics.

“With drug traffickers, we’ll stop them for something else, usually failure to maintain lane or faulty equipment,” he explained.

“Guys from other cities and states like Alabama, Mississippi, Florida and Georgia — they all drive to Atlanta to purchase their narcotics,” Taylor said. “We sometimes run into them either on their way to their destination or on their way back.”

Nicholas Antoine, 34, was on his way to Mobile, Alabama, in the early morning hours of Aug. 3 when Taylor pulled him over for a window tint violation and speeding in the southbound lanes of Interstate 85.

According to Taylor, the distinguishable odor of marijuana wafted through Antoine’s van window and after searching the vehicle, and the trained narcotics agent discovered 11 pounds of suspected “high-grade” marijuana, at least 40,000 tablets of Xanax and 1,000 Percocet pills in the rear cargo area of the van.

According to TCSO, it is the largest reported prescription pill seizure made during a traffic stop in county, state and U.S. history.

“Sometimes you go through a spell when you don’t see any (drugs on the interstates),” Taylor explained. “This month has been very active for us (TCSO). We’ve seen a lot of cases. I’ve seen seizures come on a daily basis, and then we’ve gone days where we don’t see a thing.”

Taylor said the drugs mainly come up through Mexico, into the United States and are distributed in places like Atlanta — right through Troup County via Interstate 85. But he is quick to point out I-85 is definitely not the only major interstate drug traffickers will use to move their illegal wares.

The narcotics agent has confiscated large quantities of narcotics, including 100 pounds of marijuana a few years ago. He has also been a part of a large, combined agency seizure with troopers from the Georgia State Patrol Post 2 LaGrange that discovered 20 pounds of heroin stuffed inside two car batteries during a traffic stop.

“I saw one trooper make a stop on the interstate and find 44 pounds of cocaine,” Taylor remembered. “I usually see large amounts of marijuana, large amounts of cocaine, meth, molly, ecstasy, pills, hash, hash oil. I see it all. Heroin seems to be on the rise. I’ve been seeing a lot more of that and that is bad.

“Heroin is the most dangerous, most addictive, most controlling drug — and the hardest to get off of,” he continued. “People can’t function when their on it. It’s extremely dangerous and easy to overdose on heroin. It can be fatal.”

But it is not just illegal drugs flowing up and down the corridors of Troup County, Taylor said. Folks with some very hefty wallets are stealthy moving in and out of traffic too.

“We stop cars with a lot of money in them,” he explained. “We (TCSO) stopped two tractor trailers. One had 1.3 million dollars in it, the other had 600,000 dollars. The money was going to the cartel in Mexico.”

The organization may be one of the biggest suppliers of illegal narcotics and the ingredients to make them to the United States.

But it is a supply Taylor hopes to put a dent in, one drug seizure or contraband confiscation at a time.

“It’s good to take drugs off the streets and those addicted to them,” Taylor said. “In doing that, it hurts the dealers, traffickers and organizations like the cartel.”

Troup Transformation ‘angels among us,’ gives food to needy…