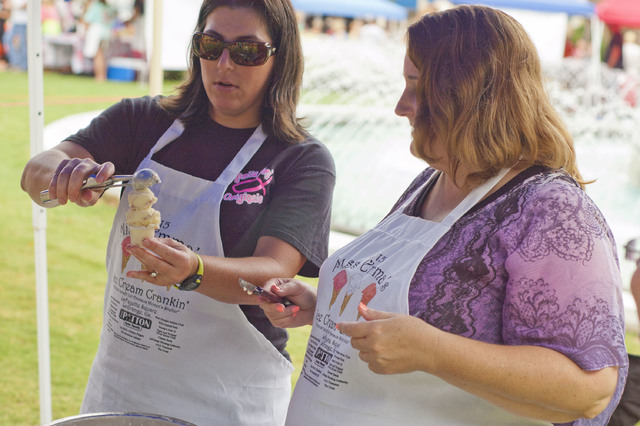 LaGRANGE — Jalapeno vanilla ice cream. It’s not a combination that might come to mind when considering a sweet, cool treat, but it drew plenty of attention downtown Sunday.

“It was an idea I heard from a friend of mine who owns an ice cream stand,” said Todd Costley at a booth on Lafayette Square representing Pop’s Party Place for the ice cream contest Sunday. “Jalapeno vanilla — he said he couldn’t keep it (in stock). It took off. … We just wanted to bring something different to the table.”

The Pop’s booth was one of 18 from local organizations and churches offering ice cream during Miss Emma’s Ice Cream Crankin’ event on the square. This year’s fourth annual event drew at least 600 people — at least that’s how many people cast ballots in the ice cream contest, said Jessica David, executive director of Emmaus Shelter. The event was organized by the shelter, which works with homeless people to provide them a place to stay and get back on their feet. Proceeds help fund its programs, and it raised more than $3,100 in about two hours, David said.

In comparison, last year’s event drew about 200 people, she said. Despite the threat of rain and some sprinkling, such a huge crowd came out that the event wrapped about an hour earlier than planned after exhausting the vendors’ ice cream supplies. There were more than 130 people volunteering at the event, including those cranking the 20 different ice cream offerings.

Groups represented varied from public officials like Mayor Jim Thornton and the Troup County Sheriff’s Office to school groups and churches. Faith Baptist Church was offering up a few varieties of traditional ice cream along with a strawberry cheesecake flavor.

“We just want to do something for others,” said Wendy Brooks, a member of Faith Baptist Church who was out serving Sunday. “We appreciate what Emmaus has done for the community and want to be part of it — sharing God’s love.”

The Gardner Newman Middle School service club students stood out from a lot of other vendors as students stood around shaking bags filled with their vanilla ice cream. Even though the flavor offering wasn’t exotic, the prepare-on-demand nature of it stood out.

Students shook the bags of ice, which contained a second bag with the liquid ice cream concoction to solidify it. Even though those wanting to try a sample had to wait a little longer, they got about a 1/3-cup portion in each bag as opposed to the about 1-ounce sample cups handed out by other vendors.

“It’s just a really good cause,” said Mandi Pike, an eighth grade counselor and sponsor of the GNMS service club, about participating in Sunday’s fundraiser. “We (the service club) try to do everything we can to support good causes.”

David, sweating and thirstily drinking a soda after the event, was still energetic and as she talked about the success of the event and what it means for the Emmaus Shelter’s mission.

“It was amazing,” she said, listing the myriad of participants who came out to support the event through ice cream, sponsorship and attendance. “… I just can’t get over the fact that we had over 600 people.”

She was also moved at having people join in fellowship in Christ on the square. She thanked city officials and leaders for allowing the event to happen and allow people to openly share their faith in public.

“We’re following His (G0d’s) command to take care of people,” David said, starting to get choked up. “If I hadn’t had to find beds for 35 people last night — and they (people in need) keep calling — it might not have meant as much to me, but it does.”