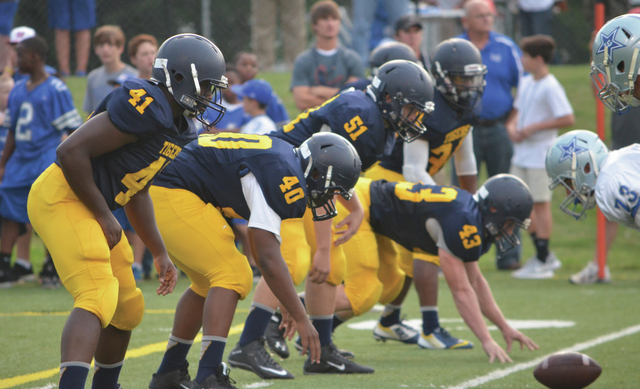 Troup’s defensive linemen get in position before the snap during the first half of Friday’s game. Kevin Eckleberry | Daily News

http://lagrangenews.com/wp-content/uploads/sites/37/2015/08/web1_LHS20.jpgTroup’s defensive linemen get in position before the snap during the first half of Friday’s game. Kevin Eckleberry | Daily News

LAGRANGE ­– They had their chances.

In the first half of Friday’s game, the Troup Tigers made their way into LaGrange territory on three different possessions.

None of those drives ended with the Tigers putting points on the board, though.

Twice the Tigers punted, and they also missed a field-goal attempt.

By the time the halftime break rolled around, the Tigers were still in the game trailing 14-0, but they knew they’d let some golden chances to score pass them by.

Troup head coach Tanner Glisson said when the Tigers get that sort of positive field position, “we’ve got to get points on the board. And when you don’t it comes back to haunt you and you can’t win ballgames like that.”

In the second half, the game got away from the Tigers, who ended up losing 35-7.

Troup began the second half with a three-and-out, and after a long punt return by LaPerion Perry, LaGrange scored a touchdown to build a 21-0 lead.

LaGrange extended that lead to 35-0 before Troup notched a late touchdown to avoid the shutout.

It wasn’t the way the Tigers were hoping to begin their season, especially with a large and enthusiastic group of fans filling the home side of Callaway Stadium, but it was just the first game of 10, and it was the team’s first regular-season game with Glisson at the helm.

“We were excited, and ecstatic about our crowd last night,” Glisson said during his coaches show on Saturday morning. “I wish we had given them a little more to cheer about. But, we are in the infant stages of our program. I think most times when you have a coaching change, there are going to be growing pains.”

After the Grangers got an 11-yard touchdown run from Kimani Barnes on their second possession to go up 7-0, the Tigers began to shift field position in their favor in the second quarter.

Following a short punt, Troup had the ball at the LaGrange 45-yard line.

On second down, the Tigers lost eight yards on a recovered fumble, and they ended up punting.

The Tigers stood firm and forced a punt, and they got the ball at the LaGrange 45-yard line once again.

The Tigers were unable to get anything done offensively, and they punted again.

LaGrange then drove 85 yards for a touchdown, with LaPerion Perry connecting with Mike Hardy for a 26-yard touchdown pass.

Now down 14-0, the Tigers needed a spark, and they got it when Dexter Shealey returned the ensuing kickoff 50 yards to midfield.

After a 15-yard penalty on LaGrange, Troup had the ball at the 35-yard line.

Quarterback Ken Truitt hooked up with Tremayne Tolbert for a 9-yard completion, and Camren Russell followed with a 7-yard first-down run to the 20-yard line.

The Tigers couldn’t advance the ball any further, though, and they settled for a 41-yard field-goal attempt which was no good.

In the second half, while LaGrange was scoring three straight touchdowns, Troup’s offense went three-and-out on its first three possessions.

Trailing 35-0, the Tigers finally got something going on their first possession of the fourth quarter.

After another long kickoff return by Shealey, Troup had the ball at the LaGrange 43-yard line.

Truitt began that possession with a 15-yard run, but again the Tigers stalled, and on fourth-and-long, LaGrange’s Derieko Smith picked off a pass in the end zone and returned it all the way to the Troup 28-yard line.

After LaGrange missed a field goal, Troup’s offense finally found the end zone, and it was an impressive drive.

The Tigers went 80 yards in 10 plays, and the big play on the drive was a 31-yard completion from Truitt to Russell.

Bonner capped the drive with a 4-yard touchdown run, and Michael Young’s extra point made it a 35-7 game with 5:29 to play.

The Tigers got the ball for the final time at the Grangers’ 45-yard line, and with Montez Crowe in at quarterback, they made it the 10-yard line before the game ended.