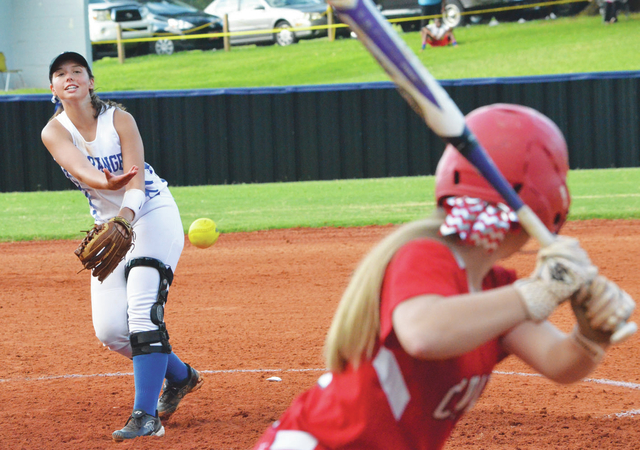 LAGRANGE – She just wanted to get on base.

When Callaway’s Keshonna Terrell stepped to the plate in the top of the seventh inning against LaGrange on Monday, she represented the tying run.

“I was just trying to get a base hit,” Terrell said. “Every time I get up to bat, that’s all I’m thinking of.”

She did a lot more than that.

Terrell drove the ball way over the right-field fence for a solo home run, giving Callaway a 2-1 lead.

LaGrange loaded the bases in the bottom of the seventh, but relief pitcher Mallory Gallaway got the final out on a groundout to end it as Callaway held on for the 2-1 win.

Terrell was the offensive star of the day with a pair of solo home runs, and freshman Oeisha Jenkins was the starting and winning pitcher.

Lauren Kuerzi had a solo home run and three hits for LaGrange, and McLain Skinner pitched a complete game.

Terrell, a senior, has been on a tear this season.

“She has really bought into what we are doing,” Callaway head coach Ashley Summerlin. “She really understands what we’re trying to accomplish. I’m really proud of her.”

It was a tough loss for LaGrange, which had its chances.

In the bottom of the seventh, the Lady Grangers loaded the bases, and Leighton Parker hit the ball hard on the ground, it was just right to Terrell at shortstop.

Had the ball made it through the infield, two runs likely would have scored.

“We put ourselves in position to win, but we missed it by that much,” LaGrange coach Dewey Lee said, holding his fingers about an inch apart. “She was going to score (from second). We were sending her. It’s a game of inches.”

While Terrell provided the offensive fireworks, Jenkins and Gallaway got it done on the mound.

Callaway pitcher Jessica Perkins has been bothered by a back injury, and she was held out of Monday’s game.

Jenkins got the start, and she was terrific, working around six hits to allow just the one run in 6 2/3 innings.

In the bottom of the seventh, Jenkins gave up a hit and back-to-back walks to load the bases, and Summerlin figured it was time to go to the bullpen.

Gallaway, who is also a freshman, got the call, and she got the groundout to end the game.

“Our senior pitcher, her back is kind of messed up, so it’s good to know that we have two freshmen pitchers we can depend on, who are going to pitch a good game,” Terrell said.

Summerlin figures exposing his young pitchers to pressure situations can only help.

“Every inning they pitch, and every situation you put them in, you want to be able to do it,” Summerlin said. “Jessica is only going to be around for so many more games. When those girls come back next year, you want them to have thrown not just innings, but meaningful innings, and knowing to be able to say I pitched with two out and the bases loaded and the winning run at third. I’ve done all that stuff. Any time you can put them in a game, the better.”

When Gallaway stepped to the mound, the pressure was about as high as it can get with the bases full and the winning run on second base.

“You have to throw strikes, and she did,” Summerlin said. “She got the ground ball. She knew exactly what we needed. I’m proud of both of those young freshmen.”

Skinner had a stellar outing for LaGrange.

In the second inning, after Terrell had given her team the lead with a home run, Callaway had a runner on third with no outs, but Skinner got out of the jam without any more runs scoring.

In the seventh inning, once again after a Terrell home run, Callaway had the bases loaded, but Skinner got a pop-out to keep it a 2-1 game.

After a scoreless first inning, Terrell led off the top of the second with a home run that cleared the left-field fence with plenty of room to spare.

In the bottom of the third, LaGrange tied it when Kuerzi got a hold of one and launched the ball over the center-field fence.

It remained a 1-1 game until Terrell, leading off once again, delivered her second home run of the game in the top of the seventh.