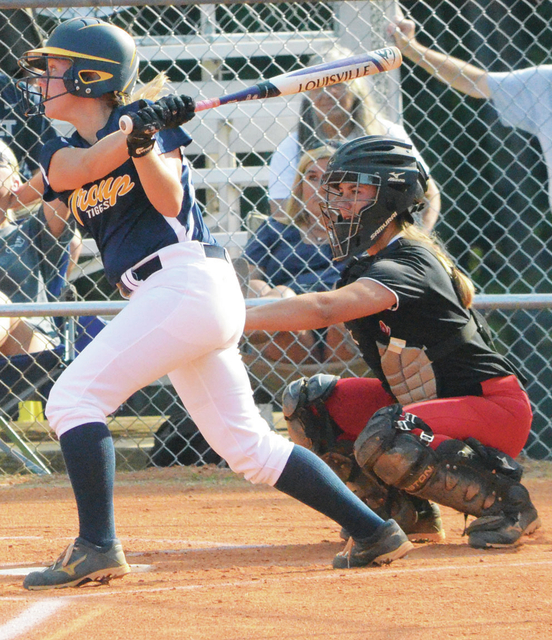 Last week at home, Troup hammered Woodward Academy 9-0 in a matchup of two teams that made the state playoffs from Region 5-AAAA a year ago.

That result, combined with the 15-0 victory over Fayette County on Aug. 18, gave Troup a 2-0 record in the region this season.

Now, Troup is preparing to take on the two teams that finished at the top of the region a year ago.

First up, the Lady Tigers will visit Carrollton today, and they will be back home on Thursday to play Whitewater.

A year ago in the regular season, Troup was 5-1 in the region against Woodward Academy, Fayette County and Sandy Creek.

Against Carrollton and Whitewater, Troup was 0-4.

The Lady Tigers head into this week’s games feeling confident, though.

Since a 1-2 start, the Lady Tigers have won four of their past five games, including last week’s run-rule victory over Woodward Academy.

The team is made up of many of the same players from a year ago, but they are a lot a year older and a year better, and a handful of freshmen have stepped in to provide a spark.

Troup coach Blair Shimandle felt the team may have gotten a little comfortable a year ago when it clinched a state-tournament bid, and the team struggled down the stretch.

Shimandle believes this team, which is already halfway to last year’s win total, will stay mentally strong the whole season.

Among the newcomers, freshman Madison McCartney, Kayla Lane and Hannah Conaway are all starting and contributing.

Lane, who has been outstanding at third base, is hitting .368 and is among the team leaders with six RBIs, and McCartney is hitting .353.

Among the veterans, senior Hanna Lane has not only been Troup’s usual starting pitcher, but she is leading the team with a .526 batting average.

Senior Amber Arnold, the leadoff hitter, is hitting .450, and she leads the team in RBIs (nine), runs scored (11) and stolen bases (seven).

Sophomore Maddie Weathers has been getting it done as well with a .478 batting average and she has six RBIs.

Sophomore Abby Taylor only has 10 at-bats, but she has made the most of them with five hits for a .500 average.

LaGrange also has a pair of tough games this week, including today’s Region 1-AAAAA showdown with powerhouse Columbus.

LaGrange (5-5 overall) is 2-1 in the region, while Columbus is sitting atop the region with a 3-0 record.

Today’s game is scheduled to begin at 4:45 p.m. at LaGrange.

LaGrange finishes the week with a non-region game at Carrollton on Wednesday.

In both games, Callaway fought from behind, only to come up just short.

Callaway lost to Pepperell 7-6, and it fell to Cedartown 9-8 in a nine-inning game.

Against Cedartown, Callaway rallied from a 6-0 deficit to take the lead before losing.

Callaway continues its region schedule with a game at Haralson County on Wednesday, and it will host Rockmart on Thursday in another region game.

In private-school softball, LaGrange Academy will have a pair of road games this week.

The Lady Warriors, who beat Griffin Christian last week to improve to 1-2, have one game this week, and it’s a big one.

On Thursday, LaGrange Academy will visit Flint River for its region opener.