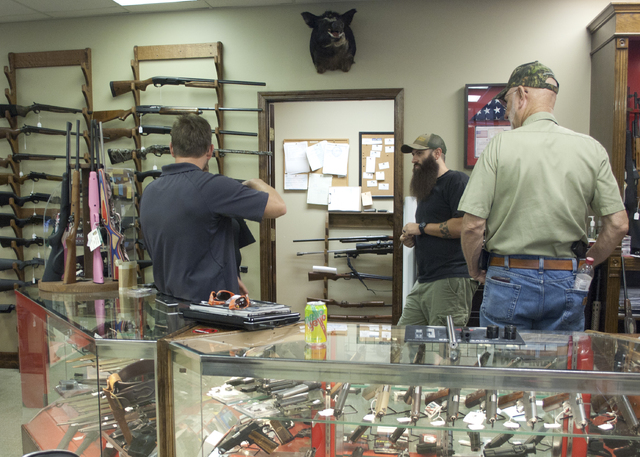 Mark Burton, second from right, co-owner of FMJ Armory, speaks with his employees Tuesday at his store on New Airport Road. Burton and co-owner Russell Allen plan to move and expand their business later this year.

http://lagrangenews.com/wp-content/uploads/sites/37/2015/09/web1_0902Commission.jpgMark Burton, second from right, co-owner of FMJ Armory, speaks with his employees Tuesday at his store on New Airport Road. Burton and co-owner Russell Allen plan to move and expand their business later this year.

LaGRANGE — The Troup County Board of Commissioners on Tuesday approved a rezoning application that may pave the way for the county’s first indoor firing range.

Mark Burton, co-owner of FMJ Armory located on New Airport Road, said he plans to nearly double his business’s retail space and add the firing range when the business relocates to 2221 West Point Road later this year. The property was previously zoned as a single-family, medium-density property, but the surrounding parcels are zoned commercially, said Jay Anderson of the county’s planning and zoning office.

Burton, who co-owns the business with Russell Allen, said he’d like to be in the new location by year’s end.

“We haven’t set a definite date yet, but we hope to be in (the new location) by Christmas,” Burton said.

If everything goes according to plan, the 2,400-square-foot indoor range will include eight bays, each with a 25-yard length, Burton said. FMJ Armory, which opened nearly three years ago as Full Metal Jacket Armory but later shortened its name, will rent pistols, rifles and some shotguns. The armory will also offer firearm familiarization and safety courses ranging from beginning to advanced levels, Burton said.

Burton said he plans to hold a grand opening celebration when the new location is completed. FMJ Armory is a member of the LaGrange-Troup County Chamber of Commerce and is a full-service gun shop that sells firearms, ammunition, gun accessories, custom gunsmithing and repairer, according to the chamber’s website.

The parcel of land where FMJ Armory plans to located is 2.59 acres. As part of the rezoning, the county health department must sign off on a commercial septic system and the driveway must conform to Georgia Department of Transportation standards because West Point Road is a federal highway.