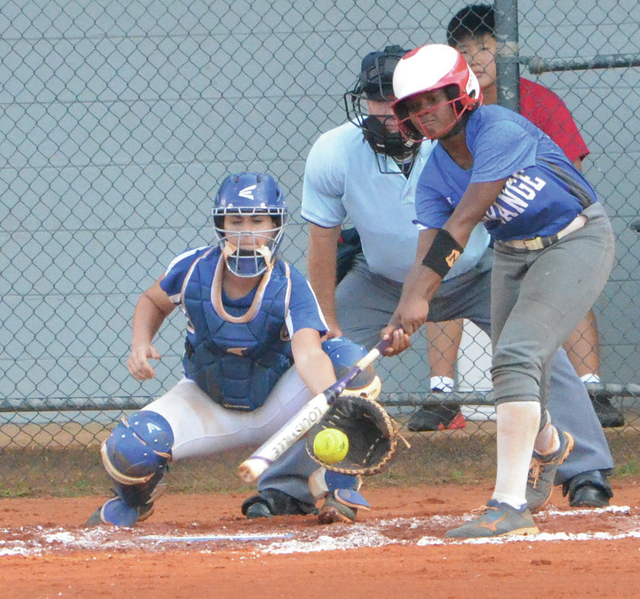 LAGRANGE – Lauren Kuerzi has provided some pop the past two days by hitting solo home runs.

Unfortunately for the LaGrange Lady Grangers, those two home runs accounted for their only runs during losses to Callaway and Columbus.

On Monday, Kuerzi hit a game-tying home run against Callaway, but LaGrange ended up losing 2-1.

A day later, LaGrange was back on its home field for a Region 1-AAAAA game against a strong Columbus High team.

Once again Kuerzi hit one way over the outfield fence, but most of the other highlights belonged to Columbus, which won 10-1 in six innings.

LaGrange fell to 2-2 in region play.

Trailing 8-0, LaGrange threatened to get some runs on the scoreboard in the bottom of the fourth inning.

Cassidy Creed led off with a bunt single, and McClain Skinner and Hannah Karcher later had back-to-back base hits to load the bases with one out.

Shaq Sutton hit the ball hard on the ground, but the throw went home for a fielder’s choice, and pitcher Kaleigh Sullivan got a groundout to end the inning.

Kuerzi put LaGrange on the board with her solo home run in the bottom of the fifth inning.

After Columbus scored four runs in the top of the sixth to push the lead to nine, the game ended because of the run rule when LaGrange couldn’t score in the bottom of the inning.

LaGrange finished with four hits, and Columbus had 11 hits, including a long home run by Raleigh Williams.

LaGrange will visit Carrollton High today for a non-region game.

TROUP: After winning their first two Region 5-AAAA games, the Lady Tigers met their match on Tuesday with a 6-0 road loss to Carrollton.

It was a scoreless game into the fifth inning, but Carrollton took control from there to claim the win.

Troup had runners on base in every inning but the third, but it was unable to push any runs across.

Troup will be at home on Thursday for a region game against Whitewater, with first pitch scheduled for 5:30 p.m.