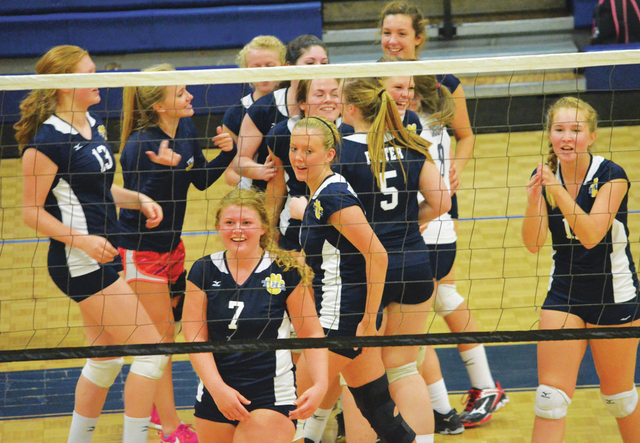 The Troup and LaGrange volleyball teams faced off on Tuesday at Troup. Troup got past LaGrange after beating Callaway earlier in the day. Kevin Eckleberry | Daily News

http://lagrangenews.com/wp-content/uploads/sites/37/2015/09/web1_9-2-volleyball2.jpgThe Troup and LaGrange volleyball teams faced off on Tuesday at Troup. Troup got past LaGrange after beating Callaway earlier in the day. Kevin Eckleberry | Daily News The Callaway Cavaliers came up short in their three matches on Tuesday against LaGrange, Troup and Auburn. Kevin Eckleberry | Daily News The Troup volleyball team celebrates after holding on for a 26-24 victory over LaGrange in the second and deciding set of their match. Kevin Eckleberry | Daily News

http://lagrangenews.com/wp-content/uploads/sites/37/2015/09/web1_9-2-volleyball1.jpgThe Troup volleyball team celebrates after holding on for a 26-24 victory over LaGrange in the second and deciding set of their match. Kevin Eckleberry | Daily News

LAGRANGE – The Troup High volleyball team got a bad break last week when one of its best players went down with a knee injury.

The show must go on, though, and the Lady Tigers showed on Tuesday that they’ll still be a team to be reckoned with.

After a strong performance on Saturday during a tournament in Smiths Station, Troup was at home on Tuesday for a four-team match that included Auburn, Callaway and LaGrange.

Troup lost a close one to Auburn, but it beat Callaway and closed the night with a big win over a LaGrange team that hadn’t lost a match before Tuesday.

LaGrange went 1-2 on Tuesday with a win over Callaway and losses to Troup and Auburn, and Callaway came up short in its three matches.

In the final match, it was Troup and LaGrange facing off for the first time this season.

After winning the first set 25-16, Troup finished things off with an exciting 26-24 victory in the second and final set.

Troup was coming off a 4-1 showing in the Smiths Station tournament that included a win over Auburn, so the team is 6-2 since the injury.

“We’ve had to make some adjustments (after the injury), and they’ve done a really good job,” Troup coach Jodi Dowden said.

Things were much tighter against Auburn.

Shortly after the Auburn match, Troup was back on the court to play LaGrange.

It was a tight first set until Troup took control by winning five straight points on Madison Murphy’s serve to go up 16-11.

Troup continued to extend its lead until it won 25-16.

Troup then came out strong in the second set, soaring to a 6-0 lead, but LaGrange rallied to tie it at 9-9.

Troup responded by winning five of the next six points to go up 14-10, but LaGrange kept hanging around.

The Lady Tigers then won the final two points to secure the win.

Troup got some strong serving throughout the day from Jayde Dowden, who finished with eight aces, as well as Murphy and Olivia Foster.

Dowden said Savannah Laney “contributed with a lot of blocks”, and she also said Hanna Westscott “did a great job.”

Dowden believes the team, despite the injury, is positioned to have a strong season because of the depth of talent.

Dowden said the team has “a lot of options on offense.”

“We’re probably deeper this year than we’ve ever been as far as overall talent,” Dowden added. “We can spread the ball out, keep the blockers guessing.”

Dowden said the Lady Tigers have continued to improve since getting together for the first pratice at the start of August.

“We started out a little rough,” she said. “We played some top, state-ranked teams, Sandy Creek and Columbus. We struggled a little at the beginning of the season. We just weren’t able to put a good combination on the floor that was working yet.”

LaGrange hadn’t lost as it arrived at Troup for Tuesday’s matches.

The Lady Grangers unbeaten streak ended with a loss to Auburn, though, and they were unable to get past Troup.

“We played good against Auburn. We just didn’t pull through,” LaGrange coach Angie Newton. “In the Troup game, we were a littie tired, which I’m sure everyone was.”

Newton has said a strength of this team is how well all of the players get along and the positive attitude they have, and she said that was on display on Tuesday.

“Even with the losses today, they were our first losses, but nobody was getting mad,” Newton said. “They’re doing a really good job of coming together and playing together as a team.”

Callaway finished the day with its best performance.

Facing Auburn, Callaway lost the first set 25-23 before dropping the second one 25-21.

“That was probably our best game, and that was a (Class AAAAAA) team,” Callaway coach Heather Smith said. “We hung with them for a long time.”

In the earlier matches against Troup and LaGrange, Smith said the team struggled when it fell behind.

“Our main thing we have to work on is when we’re losing, we have to have confidence in ourselves to come back,” Smith said. “That’s just something you learn. I told my players, I believe in you more than anything. But as a coach, there’s only so much I can do.”

Smith said she’s seen enough from her players that she knows they can be successful.