Troup hoping for a better result 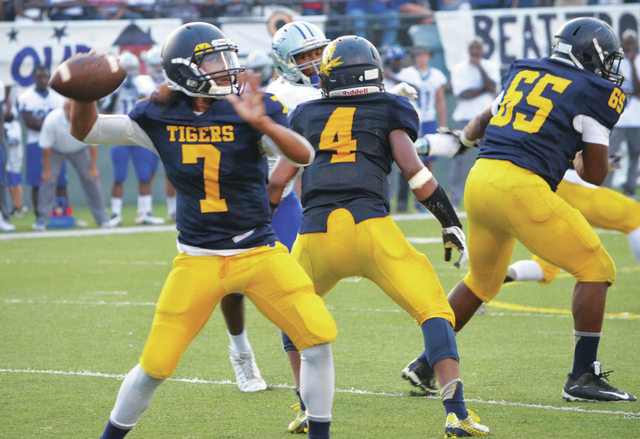 The Troup Tigers will look for their first win of the season when they host Northgate on Friday. Kevin Eckleberry | Daily News

http://lagrangenews.com/wp-content/uploads/sites/37/2015/09/web1_9-2-troup.jpgThe Troup Tigers will look for their first win of the season when they host Northgate on Friday. Kevin Eckleberry | Daily News LAGRANGE – They got back to work.

After a season-opening 35-7 loss to LaGrange last week, the Troup Tigers returned to the practice field on Monday as they look to shore some things up in preparation for another difficult assignment this week.

Northgate, which opened its season with a dominant 45-0 victory over Shaw, will be at Callaway Stadium on Friday to face Troup.

“Right now, we just have to find small wins,” said Tanner Glisson, Troup’s first-year head coach. “We have to find little things to say we’re moving forward. We’re not going to be able to take gigantic leaps. It’s just not happening right now. We have to find ways to make small progress, and in a year hopefully that has built up and we’ll look like a pretty decent football team.”

While Troup struggled to get things going against LaGrange, Northgate had it all working against Shaw.

Offensively, Northgate had 348 yards on 53 carries, with Ton Evans leading the way with 164 yards and two touchdowns.

The defense, led by Clemson commit Jamie Skalski at linebacker, did its part as well by tossing the shutout.

“They’re a very good team,” Glisson said. “I have a lot of respect for them. They’re very well-coached. They get after it. They’ve got a kid going to Clemson playing middle linebacker. He’s real good. They’re just a good football team. They’re where we need to be.”

Walburn was Troup’s head coach from 2001 to 2005, and in his first season, he led the Tigers to the state semifinals.

A year ago, Walburn watched as his team lost to Troup 29-7.

“We need to see how much improvement we can make before we go to Troup (this week),” Walburn told the newspaper in Newnan. “I want to enjoy this one, but Troup gave us the most physical beating we’ve had last year since I’ve been at Northgate.”

Troup had its chances to make a game of it in the first half against LaGrange.

Three times in the first half the Tigers had the ball in LaGrange territory, but they were unable to come away with any points and they trailed 14-0 at the break.

“We can’t leave that kind of stuff out on the table,” Glisson said.

Then in the second half, LaGrange scored touchdowns on three consecutive possession to take a 35-0 lead.

Troup got a touchdown run from Mess Bonner in the fourth quarter to avoid the shutout.

Glisson said the key now is identifying the areas where the team needs to improve to be more competitive this week and beyond.

“We know what we’re weak at,” Glisson said. “The offensive line has got to get better. We’ve got to cut down on the confusion on offense. Defensively, we’ve got to tackle better in space. Because we’re not as athletic, we’ve got to get more people to the ball. That’s kind of where we are.”

Troup will need to keep making strides to find success against a challenging slate of teams.

“There are no places on our schedule to really heal up,” Glisson said. “That’s OK. It is what it is, and we’ll just roll with it.”