Callaway looks to keep the trophy 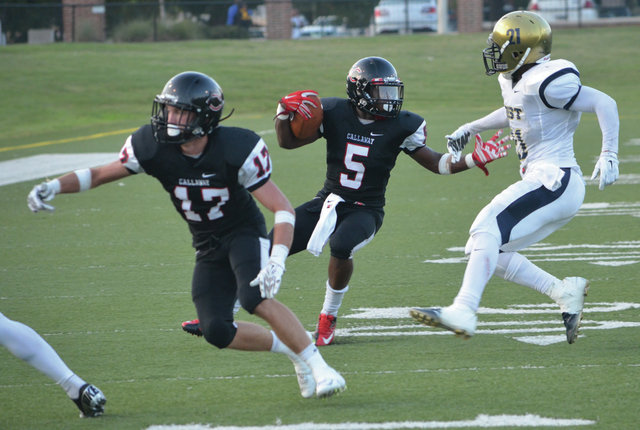 HOGANSVILLE – Callaway is hoping to hang onto the Pulpwood Classic trophy for another year.

Before the 2012 season, the coaches from Callaway and Heard County decided to put a name to the rivalry between the two teams, and the Pulpwood Classic was born.

In the first Pulpwood Classic, which was held at Callaway Stadium, Heard County won an offensive shootout 43-37.

In 2013 the scene shifted to Franklin, and it was all Callaway.

In the first game of what turned out to be an historic season for the Cavaliers, they overwhelmed Heard County 34-0.

That was the start of a 12-2 season for the Cavaliers, who ended up making it to the state final four for the first time in the history of the program.

A year ago at Callaway Stadium, the Cavaliers made it two in a row over the Braves when they won 49-20, allowing the Pulpwood Classic trophy to remain at Callaway High for another year.

On Friday, Callaway will try to make it a three-peat.

Callaway, which evened its record at 1-1 with last week’s 30-14 win over B.E.S.T. Academy, will visit a Heard County team that is 0-1 after a season-opening 29-7 setback to Fitzgerald.

“There’s a lot of tradition at Callaway and Heard County,” Callaway head coach Pete Wiggins said. “There’s a lot of pride in each other’s communities. It’s always a physical, emotional game. Over the years, there have been a lot of memories. You work hard in the weight room and in practice for atmospheres like we’ll see Friday night.”

Since Wiggins became the head coach in 2005, Callaway and Heard County have played every year, and both teams have won their share of games.

“Heard County has a great football team,” Wiggins said. “I’ve got a lot of respect for coach (Tim) Barron and his staff and the job they do. They’ll put a great team that’s ready to play on the field. We have to go and limit our mistakes from a penalty standpoint and a turnover standpoint, and be ready for a physical football game.”

Callaway dropped its season opener to LaGrange 45-20, but it bounced back to beat B.E.S.T. last week.

Running back Cedric Maynard, who is off to a torrid start, ran for 250 yards on 21 carries with a pair of touchdowns, and he has 417 yards in two games.

Quarterback Braylon Sanders also had a pair of touchdown runs, and he completed some big passes to Joe Brown, DQ Wilkerson and Devin Brock.

Callaway’s offensive line made sure there were plenty of holes for the running backs while keeping Sanders on his feet, and Noah Stephens added a 30-yard field goal.

Callaway’s defense gave up a pair of long scoring passes covering a combined 123 yards, but it didn’t allow B.E.S.T. to put together many sustained drives.

Defensive lineman J.T. Wortham, who is havnig a big season, had a tackle in the end zone for a safety.

“I felt like our guys ran to the ball,” Wiggins said.

Callaway played a cleaner game than it did against LaGrange.

After being called for 22 penalties against LaGrange, Callaway was only flagged twice during the B.E.S.T. game.

Callaway also didn’t have any turnovers against B.E.S.T. after losing a fumble and having an interception returned for a touchdown against LaGrange.

“We limited our mistakes as far as penalties and turnovers go, and I thought we did a good job in the kicking game,” Wiggins said.

The Braves trailed 13-7 at halftime, but they couldn’t keep pace with the Purple Hurricane in the second half.

“We are going to go to work and our kids are going to fight and bounce back. The whole thing is about staying together,” Heard County head coach Tim Barron said following the Fitzgerald loss. “It is a tough non-region schedule and while it is good to be tough physically, we are going to find out during the next five weeks just how tough we are mentally.”

“Their quarterback brings a lot to the table with his arm, and he can run well,” Wiggins said.

“I feel like one of the strengths of their team is up front,” Wiggins said. “Their offensive line, those guys are physical, and they’re senior-dominated, and they do a good job.”

“Those two guys do a great job up front, and they’ve got two really good inside backers,” Wiggins said. “I feel like their defense plays hard and runs to the ball. We’ve got to do a good job blocking up front from an offensive-line standpoint, and give our backs some lanes, and hopefully we can put some points on the board.”