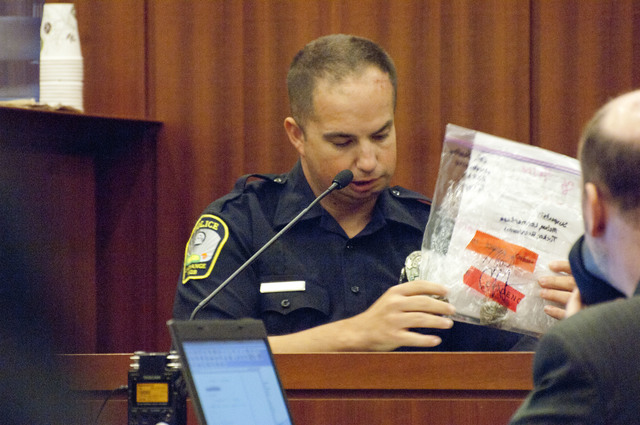 Retired Troup County Superior Court Judge Allen Keeble, who is filling in for Judge John Simpson, looks toward prosecutor Jep Bendinger on Wednesday during the armed robbery trial of Quint Tucker of LaGrange.

http://lagrangenews.com/wp-content/uploads/sites/37/2015/09/web1_WEBTrial01.jpgRetired Troup County Superior Court Judge Allen Keeble, who is filling in for Judge John Simpson, looks toward prosecutor Jep Bendinger on Wednesday during the armed robbery trial of Quint Tucker of LaGrange. LaGRANGE — A jury is expected to begin deliberating today in the trial of a LaGrange man who prosecutors and police say robbed his long-time friend with a group of other men on Harwell Avenue in May 2014.

Quint Tucker is accused of participating in the May 15 home invasion and robbery that left 32-year-old Jimmy Dean seriously injured after one of the robbers shot him in the arm with a shotgun; the group stole two small sacks of suspected marijuana and a few dollars from Dean’s pockets, according to police.

In the second day of testimony Wednesday, LaGrange police detective AnDrea Scott told the court she and detective Jason Duncan found those same two bags of suspected pot inside a Ford Mustang in which Tucker was a passenger. LaGrange police officer Garrett Pressley stopped the vehicle near Commerce Avenue a few hours after the alleged robbery and initiated a felony traffic stop. Prosecutor Jep Bendinger of the Coweta Judicial Circuit’s District Attorney’s Office showed the jury a video of the traffic stop taken from the dash cam of Pressley’s police cruiser.

In the video, Pressley stops the vehicle with the aid of another officer and uses a loudspeaker to order the driver and Tucker out of the car one by one. He tells the occupants to shut the car off, open each door one at a time and exit with their hands on their heads.

“Now walk backwards, slowly, toward me,” Pressley says in the video. Both men were arrested.

In the hours that followed, Scott took a gunshot residue sample from Tucker’s hands. The prosecution brought in Michael McCarriagher, a Georgia Bureau of Investigation technician, to explain the process for the testing and what was concluded.

McCarriagher testified that when a gun is fired, minuscule particles of lead, barium and antimonium are released from the bullet. At one-one millionth of a meter, the tiny particles condense with the cooler air outside the gun’s chamber and “fall to the ground, sort of like rain,” he said.

Investigators are able to swab a person’s hands and use a scanning-electron microscope to view those swabs on a microscopic level to see if any of the three materials are present.

Two particles were found on samples taken from Tucker’s hands, the lab technician testified. While just two particles is a relatively small amount, McCarriagher said, it still indicated that Tucker was at least likely in the presence of a gun that was fired. The residue, he said, doesn’t stay on people’s hands for long; between 10 and 12 hours is usually the maximum, but sometimes it can “sluff off,” as the prosecutor explained, in as little as four hours.

Tucker’s attorney, Newnan-based David Taylor, didn’t deny that Tucker was in the home when the gun was fired, but that he was visiting Dean there as a friend and was “in the wrong place at the wrong time,” he said during his opening statement Tuesday.

Charity Mitchell Dean, who was Dean’s girlfriend at the time but is now married to him, testified that she saw Tucker in the home, and that he was actively participating in the robbery.

“Let’s go, let’s go, they’re coming,” he allegedly said before fleeing the house with the other men, according to Charity Dean’s testimony.

She told the court Tucker was the only member of the group who was not wearing a mask, and she was able to recognize him. The defense later called LaGrange police officer Monica Nunnley to testify. In a police report written by Nunnley about the robbery, Nunnley recorded Charity Dean told her the man who said “let’s go, they’re coming,” was wearing a mask.

Duncan, the lead detective in the case, was also called to testify. The prosecutor showed the jury a body-cam video of an interview Duncan did with Jimmy Dean at Grady Memorial Hospital in Atlanta after the shooting.

Jimmy Dean picks Tucker out of a photo line up, and accuses him and another man who was later exonerated of participating in the robbery.

Both the state and defense have exhausted their witness list and closing arguments were expected this morning. The jury may soon begin deliberations.

Read LaGrange Daily News online and in print for updates on this trial as it progresses.