Grangers going for three wins in a row 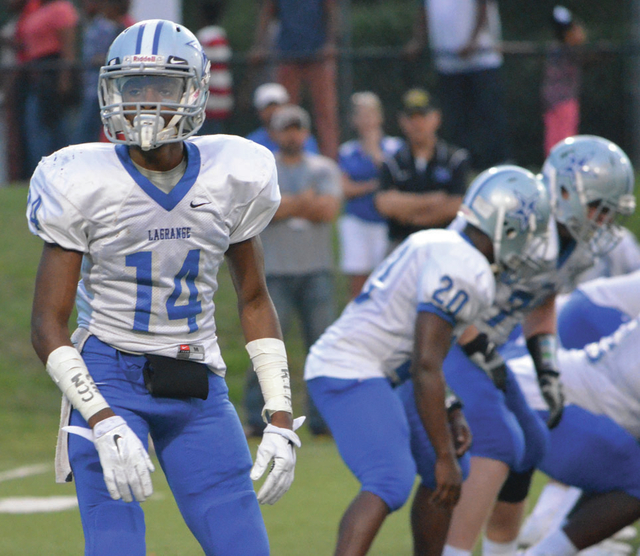 LAGRANGE – So far, so good for the LaGrange Grangers.

After opening the season with a 45-20 win over Callaway, LaGrange knocked off Troup 35-7 last week to win the county championship.

The Grangers will be back on the field today as they look to improve to 3-0 with a home win over the Spalding County Jaguars.

“It was a game all the way down to the wire,” Burks said. “I know they’re going to come back wanting some payback and revenge. It is what it is. We’ll be ready.”

Spalding County’s defense only allowed 68 yards, while the offense churned out 329 yards, including 187 yards on the ground.

Quarterback Naricuss Driver had an efficient day for Spalding County, completing 10-of-13 passes for 138 yards with a touchdown, and A.J. Moses had 92 yards and three touchdowns on just seven carries.

“They’re a good team,” Burks said. “They’ve got athletes. They do the things that we’ve been seeing for the last couple of weeks. We’re going to be prepared for some of the things they’ve done.”

After playing on Friday last week, LaGrange has had a short week of preparation for today’s game.

“It was a quick turnaround for us,” Burks said. “But the good thing is, we’re off next week, so we can go just let it all out.”

It has been a terrific start to the season for the Grangers, who were 0-2 a year ago at this point after losing to Callaway and Troup.

“We needed it for ourselves, for the community,” Burks said of the fast start.

The coach cautions that as much fun as those wins were, though, there is a whole lot of work left to do.

“The goal is to finish,” Burks said. “It’s just two games. We could go 2-8. We won’t get caught up in that. They’re doing a real good job focusing.”