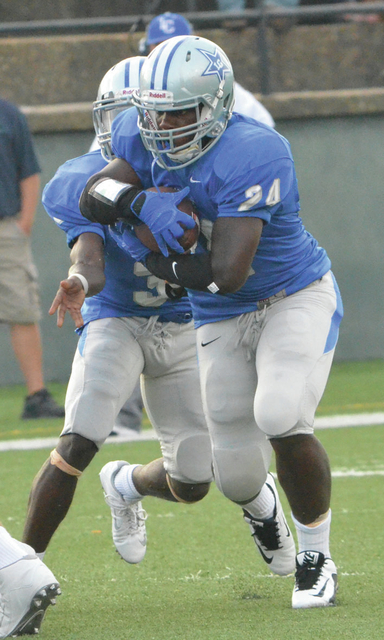 LaGrange offense has plenty of punch Senior Will Pauley has moved from defense to offense this season and he has been playing wide receiver. Kevin Eckleberry | Daily News

http://lagrangenews.com/wp-content/uploads/sites/37/2015/09/web1_9-3-LHS-pauley.jpgSenior Will Pauley has moved from defense to offense this season and he has been playing wide receiver. Kevin Eckleberry | Daily News When opposing defenses are preparing to face the LaGrange High offense, it’s difficult to decide what to focus on.

If teams load up the box to stop the running game, LaGrange has shown the ability to hit big plays down the field with a talented group of wide receivers catching the ball, including Mike Hardy, who has touchdowns in both of the first two games.

In the running game, LaGrange has some formidable weapons as well, including senior backs Kimani Barnes and Amad Ogletree who have both been effective.

And here’s the really scary thing for defenses.

Even if a defense does everything right, LaGrange has a quarterback in LaPerion Perry who can turn nothing into something, who can turn what looks like a sure negative-yardage play into a big gainer with his ability to improvise and stay on his feet.

It’s no surprise, then, that through two games, LaGrange’s offense has been pretty close to unstoppable.

LaGrange’s offense has 10 total touchdowns against Callaway and Troup, and those scores have come in a bunch of different ways.

Perry has scored three touchdowns running the ball, and he also has two scoring passes to Hardy, and one to Andrew Askew.

On Askew’s touchdown, he took a short pass and turned it into a 49-yard completion.

Askew also had a 31-yard catch against Callaway to set up another score.

Hardy had a 26-yard scoring catch against Troup, as well as a 13-yard touchdown reception where he took the ball away from a pair of Callaway defenders.

Barnes and Ogletree both have touchdown runs, and they’ve done it with power as well as speed, showing off their versatility as runners.

LaGrange’s offensive line, despite the absence of North Carolina-bound Luke Elder who is recovering from knee surgery, has gotten the job done the first few weeks.

“I love what the offense is doing right now,” senior wide receiver Will Pauley said. “We’re scoring a lot. We have threats everywhere.”

A year ago, LaGrange’s offense was centered around running back Mon Denson, who had a phenomenal senior season before signing with South Carolina.

This season, LaGrange head coach Dialleo Burks said a focal point has been to get as many people involved as possible offensively.

It helps to have Perry running the offense.

Perry, a wide receiver a year ago, ran for more than 200 yards last week against Troup and has 360 yards in two games.

Perry has also thrown for 220 yards this season, and he’s averaging more than 20 yards a completion.

Ogletree, who was the quarterback a year ago, has settled in nicely to his role as a running back, and he and Barnes give LaGrange a potent one-two combination in the backfield.

Among the wide receivers, Hardy has made the most of his opportunities.

Perry completed five passes against Troup last week, and three of them went to Hardy, who had 100 yards worth of receptions, including a 46-yard catch.

In the Callaway game, Hardy only had one catch, but it was a big one.

Early in the fourth quarter, Hardy was double-covered, but he managed to make the 13-yard touchdown catch.

Hardy said he expects to make the catch everytime the ball is thrown his way.

LaGrange hasn’t thrown the ball much the first two games, but even when the wide receviers aren’t catching their ball, they’re still playing a key role.

LaGrange has had a lot of long running plays, many of them coming from Perry, and the wide receivers serve as blockers on those plays.

“You never know when the ball’s coming to you,” Hardy said. “You might not get the ball, but everybody has to block.”

Pauley has settled in nicely to his role as a wide receiver.

He was a safety a year ago, but Burks figured he would be better utilitized on the offensive side of the ball, so he made the move.

“I was playing both, safety and receiver,” Pauley said. “They needed a Y (slot receiver) really. I just started playing that. I do enjoy it. I love playing it.”

Pauley said he’s proud of what his former colleagues on defense have been doing this season.

“The defense this last game they really impressed me,” Pauley said. “They shut out Troup. The way it’s looking right now is really good. Everybody’s on the same page and performing the best we can.”

LaGrange will look to keep the good times rolling when it hosts Spalding County today.

Coming off two emotional games against Callaway and LaGrange, Hardy said the team has strived to make sure to give Spalding County the same amount of attention.

“What we want to do is look at every game the same,” Hardy said. “The next game is the biggest game.”