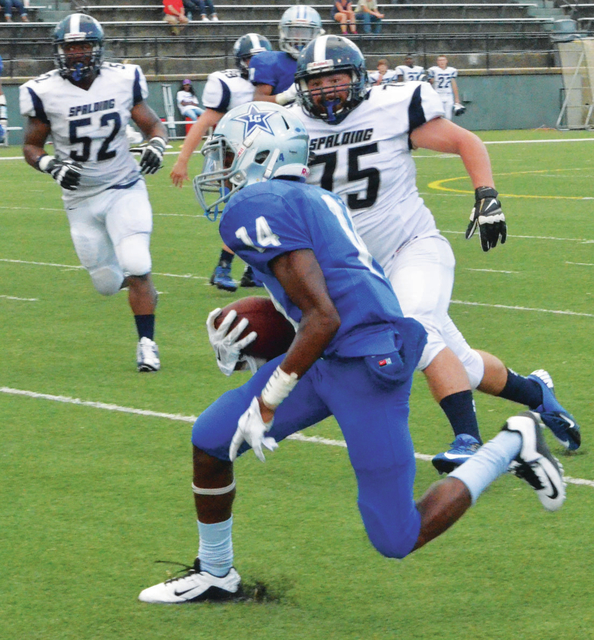 A whole bunch of bodies from LaGrange and Spalding County collied as LaGrange running back Amad Ogletree carries the ball in the first half of Thursday’s game. Spalding County won 20-9. Kevin Eckleberry | Daily News LaGrange’s Matthew Thomas made a field goal in the first half. Kevin Eckleberry | Daily News

http://lagrangenews.com/wp-content/uploads/sites/37/2015/09/web1_9-4-LHS14.jpgLaGrange’s Matthew Thomas made a field goal in the first half. Kevin Eckleberry | Daily News LaGrange’s Enrique Moody had a 20-yard completion to help set up a field goal in the first half. Kevin Eckleberry | Daily News

http://lagrangenews.com/wp-content/uploads/sites/37/2015/09/web1_9-4-LHS10.jpgLaGrange’s Enrique Moody had a 20-yard completion to help set up a field goal in the first half. Kevin Eckleberry | Daily News

LAGRANGE – It wasn’t their night.

The LaGrange Grangers came into Thursday’s game against Spalding County with all sorts of momentum and positive vibes after opening the season with impressive wins over Callaway and Troup.

The story was a much different one at Callaway Stadium on Thursday, though.

Spalding County trailed 9-3 in the first half, but it scored the game’s final 17 points to claim a 20-9 victory.

The Jaguars improved to 2-0, while the Grangers tasted defeat for the first time this season and fell to 2-1.

“They wanted it more,” LaGrange head coach Dialleo Burks said. “When it was time to make a play, they did, and we didn’t. My hats off to coach (Nick) Davis. Every time we play each other, it’s a grind. But we’re OK. It’s a long season. We’ll be fine.”

In their first two games, the Grangers dominated the second half, outscoring Callaway and Troup by a combined score of 57-21.

LaGrange was unable to find that second-half magic against Spalding County.

The Grangers couldn’t get their previously high-powered offense going in the second half, and while the defense played hard and did a nice job of limiting the damage, the Jaguars managed to score 10 points in the final two quarters.

“The defense played a hell of a game tonight,” Burks said. “Offensively we struggled. We’ll go back to the drawing board.”

The Grangers’ lone touchdown came in the second quarter when they went 80 yards for a touchdown, with Jeremiah Wright capping the drive with a 3-yard run.

Matthew Thomas added a 20-yard field goal for the Grangers.

Trey Gregory made a pair of field goals for the Jaguars, including one late in the game that pushed the lead to 11 and made it a two-score game.

Trailing 10-9 at the half, the Grangers were unable to find any success on their first three possessions of the third quarter.

After a LaGrange fourth-down attempt failed, Spalding County began its fourth possession of the second half at its own 46-yard line.

It took the Jaguars one play to add to their lead.

On first down, Moses took a handoff from Driver and went 54 yards for the touchdown, and Gregory’s extra point pushed the lead to 17-9 with 1:09 left in the third quarter.

Early in the fourth quarter, Spalding County made it into LaGrange territory.

On three consecutive plays, though, LaGrange had tackles for losses, including a third-down sack by Johnathan Olajubutu after James Clark made the initial contact on Driver.

After a punt, the Grangers got the ball back still down by just eight points, needing a touchdown and a two-point conversion to tie it.

Once again LaGrange’s offense struggled, and the Grangers had to punt the ball away.

Spalding made it all the way to the LaGrange 5-yard line after the punt, but it was unable to punch the ball into the end zone.

The desperate Grangers, for the first time in the second half, were finally able to move the ball down the field.

On second down, Perry threw a perfect deep ball to Jalen Wilson, who made a 45-yard catch to the Spalding County 3-yard line.

The Grangers caught a break when a Spalding County player was flagged for pass interference on fourth down, keeping their slim hopes alive.

On the next play, though, Spalding County came up with an interception in the end zone to end any hope of a LaGrange comeback.

Spalding County ran one kneel-down play, and the clock ran out.

“We can’t come out flat,” Burks said. “This is an emotional game. I tell them that all the time. But we’re going to look at the film, we’re going to keep going.”

In the first half, LaGrange put the game’s first points on the board.

After a short punt, LaGrange had the ball at the Spalding County 36-yard line.

On second down, Perry connected with Enrique Moody for a 20-yard completion.

On fourth down from the 16-yard line, a running play was called, and Wright got the ball and bulled his way through the Spalding County defense for a 9-yard gain.

The Grangers got to the Jaguars’ 4-yard line before the drive stalled, and Thomas converted the 20-yard field goal to make it a 3-0 game with 11:10 left in the first half.

After Spalding answered with a field goal of its own to tie it, LaGrange embarked on its most impressive drive of the game.

The Grangers went 80 yards in eight plays, and Wright finished things off with his 3-yard touchdown run.

Perry got the Grangers down the field in a hurry with runs of 23 and 28 yards on the first two plays, and Moody had a 14-yard carry to the 15-yard line.

Amad Ogletree had an 11-yard run on third down to set up Wright’s touchdown.

The Grangers were unable to convert the extra point, and their lead was 9-3.

It didn’t take the Jaguars long to answer, with Driver dropping a 55-yard touchdown pass into the hands of Johnson.

With 3:35 left in the half, Gregory made the extra point to give the Jaguars a 10-9 lead, and they didn’t trail again.

LaGrange did put together a nice drive to end the first half, even though it didn’t translate into points.

After a mixup on the kickoff, LaGrange had the ball at its own 4-yard line.

Perry got the Grangers out of trouble with a 25-yard carry, and he then completed a 16-yard pass to Ogletree.

Perry and Ogletree hooked up for three more completions covering 20 yards as the Grangers made it to the Spalding County 37-yard line before a fourth-down play failed, and time ran out on the first half.

On Spalding’s first three possessions of the second half, Emmanuel Mann and Wright both had sacks to force punts, and it remained a one-point game.

LaGrange looked like it might be getting something going when Wright had a 12-yard run on a fake punt attempt to midfield late in the third quarter.

After the next three plays netted just five yards, LaGrange went for it on fourth down and failed, and Spalding County scored on the next play.

The Grangers next two possessions ended in punts before they nearly reached the end zone on their final drive of the night.

The Grangers don’t play next week, and they will visit Mary Persons on Sept. 18.