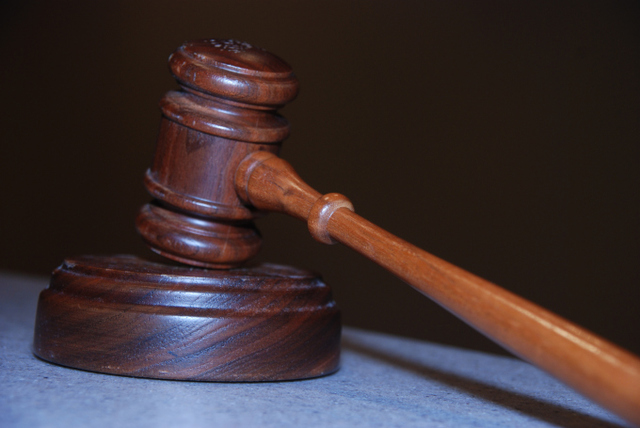 Robbery defendant Quint Tucker of LaGrange, left, speaks with his Newnan-based attorney, David Taylor, on Tuesday during a trial in Troup County Superior Court. Tucker was found guilty Thursday of bursting into a home on Harwell Avenue with several other men, one of whom shot the resident and stole drugs and a few dollars in May 2014.

http://lagrangenews.com/wp-content/uploads/sites/37/2015/09/web1_CMYK0901Trial02.jpgRobbery defendant Quint Tucker of LaGrange, left, speaks with his Newnan-based attorney, David Taylor, on Tuesday during a trial in Troup County Superior Court. Tucker was found guilty Thursday of bursting into a home on Harwell Avenue with several other men, one of whom shot the resident and stole drugs and a few dollars in May 2014. LaGRANGE — A 24-year-old man will spend the next 25 years of his life in prison after a Troup County Superior Court jury convicted him Thursday of armed robbery and aggravated assault.

Quint Tucker of Mitchell Avenue must serve every day of his 20 year sentence for one count of armed robbery against former LaGrange resident Jimmy Dean, 32, which will be followed by five years for possessing a firearm while he committed the felonies, according to the sentence handed down by Superior Court Judge Allen Keeble. One additional charge of aggravated assault against a woman who was living in the home will run concurrent to the armed robbery sentence.

Tucker’s Newnan-based attorney, David Taylor, said he plans to file an appeal for a new trial within a 30-day period and said he was unable to comment further at this time.

Prosecutors and police told jurors Tucker was one of several men who came to Dean’s Harwell Avenue home on May 15, 2015, knocked on the door and barged their way in after Dean opened it. A masked man who was with Tucker shot Dean with a shotgun and the pellets struck his bicep, causing serious injury. He survived, but only after being airlifted to Grady Memorial Hospital in Atlanta.

The men rummaged through the house as Dean played dead on a hallway floor — they may have been looking for $1,300 Dean had made from recently selling a car, evidence showed. The intruders never found the money, and instead took off with two small bags of pot and a few dollars from Dean’s pockets.

The men also burst through the door of a bathroom where Dean’s girlfriend was showering and ordered her out at gunpoint.

“Let’s go, let’s go, they’re coming,” Dean testified he heard Tucker saying to the other men before they ducked out of the house and ran down Harwell Avenue to a waiting car.

Later in the evening, LaGrange Police Officer Garrett Pressley spotted a blue Ford Mustang fitting the description of the alleged getaway car near Commerce Avenue, according to prosecutor Jep Bendinger. Pressley initiated a felony traffic stop, called for back-up units and ordered Tucker and another man out of the car.

A gunshot residue test was also performed on Tucker and showed he’d likely been in the presence of — at least — a gun being fired.

The prosecution brought in Michael McCarriagher, a Georgia Bureau of Investigation technician, to explain the process for the testing and what was concluded.

McCarriagher testified that when a gun is fired, minuscule particles of lead, barium and antimonium are released from the bullet. At one-one millionth of a meter, the tiny particles condense with the cooler air outside the gun’s chamber and “fall to the ground, sort of like rain,” he said.

Investigators are able to swab a person’s hands and use a scanning-electron microscope to view those swabs on a microscopic level to see if any of the three materials are present.

Bendinger said after the verdict and sentencing that he was pleased with the way the case closed. He made a special point to note the hard work of LaGrange Police Department and detectives Scott and Duncan.