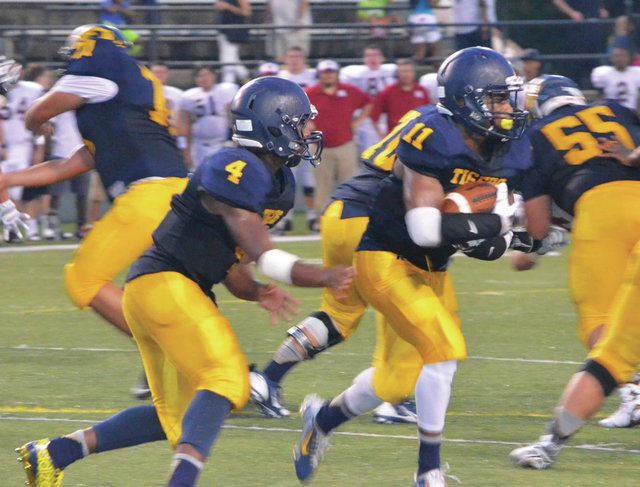 LAGRANGE – It was one of those nights.

The Troup Tigers, seeking their first win after a season-opening loss to LaGrange, instead watched the Northgate Vikings breeze to a 56-6 win at Callaway Stadium on Friday.

A strong Northgate team that is led by former Troup head coach Tommy Walburn put it away in the first half, dominating the game in every facet to take a 42-0 lead at the break.

“That was about as bad as we could have played in the first half,” Troup head coach Tanner Glisson said. “Sometimes you want to see if you can refund everybody’s money. We just got our tails whipped in all phases of the game.”

For Walburn, it was a happy homecoming to Callaway Stadium where he enjoyed so much success during his five-year stint as Troup’s head coach.

In his first season at Troup, Walburn led the team to the state semifinals, and the team continued to enjoy a lot of success during the rest of tenure.

Walburn has been the Northgate coach since 2010, and this team could be the best one he has had there, and that includes the 2011 team that went 11-1.

Northgate has a dominant defense that has given up just seven points in two games, and the offense has the ability to score points in bunches.

Walburn said he was pleased with “just the way we came out and attacked from the opening kickoff. We just kind of jumped out on them quick.”

Northgate’s defense forced a three-and-out to begin the game, and the offense needed just three plays to score the game’s first points, and the onslaught was on.

By the time the first quarter was over, Northgate had a 35-0 lead.

“We kind of got them down in a hole,” Walburn said. “Anytime you can get off to a fast start and get some quick points, it allows you to do some different things on offense.”

Troup scored its only points of the game in the third quarter when Mess Bonner capped a 56-yard scoring drive with a 15-yard touchdown run.

After Troup’s opening possession, Northgate took over at its own 43-yard line.

On third down, Kyle McLaren threw a 50-yard touchdown pass to Turner Hughes, and Northgate led 7-0.

After a second straight Troup three and out, Northgate drove 60 yards for another touchdown, with Kyle Cater taking it in from one yard out to complete the eight-play drive.

Northgate’s defense then got into the act.

On a first-down play, Troup fumbled, and Northgate’s Matthew Lewis scooped the ball up and raced 21 yards for the touchdown to make it a 21-0 game.

Troup lost another fumble on its ensuing possession, and on the next play, Ton Evans scored on a 25-yard run, and Northgate led 28-0 with 4:33 left in the first quarter.

After a Troup punt, Northgate drove 64 yards in five plays for its fifth touchdown of the opening quarter.

Northgate had a one-play scoring drive early in the second quarter, with Evans taking it to the end zone for a 73-yard touchdown run.

That capped the first half scoring and gave Northgate a 42-0 lead.

After Northgate added a touchdown in the third quarter to go up 49-0, Troup went 56 yards in seven plays for its only touchdown.

After a Northgate penalty on fourth down kept the drive alive, Ken Truitt completed a 25-yard pass to Camren Russell.

On the next play, Bonner scored on a 15-yard run, and the extra-point attempt was unsuccessful.

Northgate added a fourth-quarter touchdown to finish the scoring.

Troup will look to get things turned around when it visits Harris County on Friday.