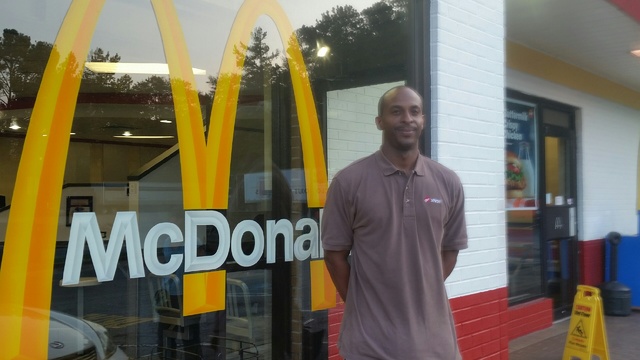 Travis Robertson, 35, stands in front of McDonalds on Whitesville Road where he helped get people out of harm’s way and warned others to stay out while a gunman was inside robbing the restaurant. He has been hailed as a hero for his actions by some of those he helped.

http://lagrangenews.com/wp-content/uploads/sites/37/2015/09/web1_WEB0907McDonaldsHero1.jpegTravis Robertson, 35, stands in front of McDonalds on Whitesville Road where he helped get people out of harm’s way and warned others to stay out while a gunman was inside robbing the restaurant. He has been hailed as a hero for his actions by some of those he helped.

LaGRANGE — When Travis Robertson sat down for his first meal of the day at the McDonalds on Whitesville Road near Interstate 85 about 6:30 p.m. Thursday, he was ready to relax and celebrate a new beginning in his life.

The 35 year old had been in trouble with the law. Robertson said he was caught driving on a suspended license and violated his probation. After doing a brief stint in jail, he became part of the Troup County Jail’s work release program and that Thursday afternoon had just finished paying off all his probation fines.

Now, with a full-time job as a lead operator at Sewon, Robertson was determined to turn his life around and start down a positive path.

Little did Robertson know that path would include being considered a hero less that a minute later after he sat down with his food inside McDonald’s. That is when he said a man wearing a black bandana around his mouth and holding a gun walked into the restaurant and started demanding money from the employees.

“I took one bite of my sandwich, still had my nuggets on the table, and he came in,” Robertson said of the gunman. “He came in the door right by the drive through … he went behind the counter and said, ‘Give me the money.’ Then he started walking around the back. Everyone just stared in shock.”

Robertson said the gunman — whom LaGrange Police later identified as DaQuan Ellis, 18, of Manchester — came back towards the registers and showed off the pistol. According to Robertson, that is when people starting panicking and trying to get out of the store.

“He (the gunman) couldn’t get control of the situation … so he grabbed one of the older female managers and made her start opening one of the registers,” Robertson said.

Robertson saw his chance to escape from the restaurant. He, along with the friend he was eating with, slowly got up from their table and made their way to a wall in the middle of the store. It was what separated them from being seen by the gunman — and reaching the outside door that would lead them to safety.

Robertson said he shielded his friend, Shekeka, as she scurried towards the door and made it out first. But just as Robertson was about to help others make their get away, the gunman looked up.

“He saw us and we froze,” Robertson remembered. “We made eye contact for a couple of seconds … I made sure Shekeka got out, and then I and some of the employees and customers got out. I was running and telling everyone to keep going and telling people in the parking lot not to go inside.”

Robertson said less than two minutes later, the gunman ran out the same door and towards the woods. A green Jeep then sped out from behind tractor-trailers parked in the lot and took off toward the interstate, Robertson stated.

Robertson said he learned the next day that Ellis and his alleged accomplice in the armed robbery, Monique Quarterman, 30, also of Manchester, were arrested after a brief police chase and eventual crash when they drove north in the southbound lanes of Interstate 85.

According to the LaGrange Police Department, it was only then that law enforcement officials learned there was also an 8-year-old child also in the vehicle with Ellis and Quarterman.

The child had minor injuries but was flown out to a nearby hospital as a precaution, stated Sgt. Maurice Raines, post commander of Georgia State Patrol Post 2 in LaGrange.

“I was happy,” Robertson stated about the arrests. “I know times are hard, but you don’t come in and terrorize people … especially the older woman emptying the cash registers. That was someone’s mother or grandmother … she could’ve passed out or had a heart attack. He could have shot her … you just don’t know.

“I’m feeling better knowing he’s captured and knowing the child is doing well,” he added. “I’m really happy no one got injured.”

Once the Daily News posted the story on Facebook, it did not take long for people add their own account of what happened inside the restaurant. Some of those posts included thanking the man “in the orange Sewon shirt” who helped warn folks about the robbery. One woman called him her hero. That man was Travis Robertson.

“I couldn’t stop crying,” Robertson said after he read the Facebook posts. “From being locked up and thought of as a bad person to being thought of as a hero … it’s almost better than getting a raise at work, it really is. I had to call my mom and tell her about it.”

Robertson said his mom and Steve Dittman, owner of Fit24 gym, are his heroes — valuing their advice, wisdom, friendship and support during the highs and lows in his life.

As for his “hero” status, Robertson said he plans to take it in stride and keep working at Sewon. But having been through a tough time of his own recently, he did have one piece of advice for the suspected armed robbers, Ellis and Quarterman.

Ellis and Quarterman were both charged with armed robbery, aggravated assault, cruelty to a child in the first degree, felony fleeing and eluding and numerous traffic offenses.