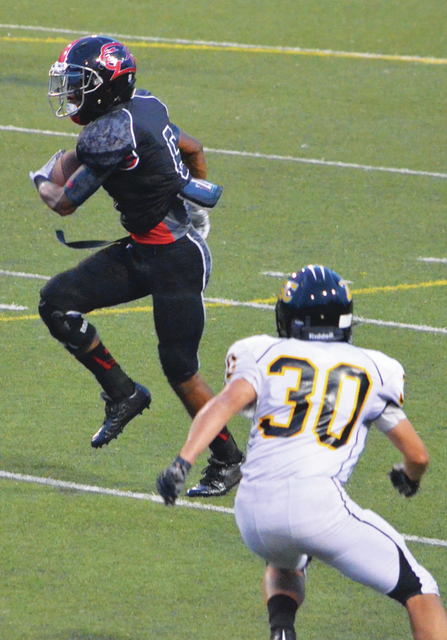 LAGRANGE – If Saturday’s game at Callaway Stadium was a foot race, the LaGrange College Panthers would have led nearly the entire way.

It was the Birmingham Southern Panthers using a late rally to cross the finish line first, though.

Birmingham Southern got a late interception return for a touchdown to take the lead, and it held on for a 29-28 victory in the season opener for both teams.

The Panthers had a commanding 21-3 lead at the half, and after watching that lead shrink to five, they scored a touchdown to go up 28-16 in the fourth quarter.

After a pair of Birmingham Southern field goals, LaGrange College’s lead was down to six points.

Following the second of those two field goals, the Panthers had the ball at their own 27-yard line as they looked to eat up some clock and preserve the lead.

Instead, on second down, Birmingham Southern’s Kerrigan Pennington intercepted a Connor Blair pass and returned it 37 yards for a touchdown.

The extra point gave Birmingham Southern a 29-28 lead, and with 2:42 left in the game, the Panthers were trailing for the first time.

When the Panthers got the ball back, they went backward, and faced with fourth-and-24 from their own 11, they punted.

Birmingham Southern was able to run out the clock, sending the Panthers to a disheartening home loss.

“We talk to our guys at the half about the game being 0-0 and not to relax,” LaGrange College head coach Matt Mumme said. “I thought offensively in the second half we relaxed a little bit. I thought our (offensive line) for being as young as they were played well. We just needed to make some plays at the end.”

Blair, a sophomore who made his first start, completed 30-of-48 passes for 367 yards and three touchdowns, all to Josh Hardrick.

Blair also had three interceptions, including two in the game’s closing moments.

The Panthers had everything working in the first half as they established the big lead.

The defense did a terrific job putting the clamps on Birmingham Southern’s offense in the opening half.

On its eight first-half possessions, Birmingham Southern managed just one field goal, and that came after a LaGrange College fumble deep in its own territory.

In the first quarter, the Panthers needed just seven plays to go 80 yards, with Blair capping the drive with a 5-yard scoring pass to Hardrick.

Alec Frear made the first of his four extra points, and the Panthers led 7-0 with 7:04 remaining in the opening quarter.

Birmingham’s lone first-half score was set up by a LaGrange College fumble on a punt return.

The Panthers responded with an 11-play, 66-yard drive that culminated with a Nick Searcy 1-yard touchdown run, and the Panthers were up 14-3.

Blair completed all five of his passes on the drive, and he also showed off his running ability with a 12-yard carry.

After another defensive stop, the Panthers took over near midfield following a punt, and they went right back to work.

The Panthers went 52 yards in eight plays, and it was Blair finding Hardrick from five yards out for the touchdown, one play after Lord Smith had an 18-yard run.

Blair also completed an 11-yard pass to Ervens Oge on third down to keep the drive alive.

The Panthers headed to their locker room having dominated the first half in every way imaginable, but there were still two more quarters to play.

The Panthers had the ball first at the start of the second half, and they made it to the Birmingham Southern 17 before the drive stalled, and a 34-yard field-goal attempt was no good.

The Panthers went three-and-out on their ensuing possession, and Birmingham Southern needed just four plays to go 59 yards for another touchdown.

When Samir Usman scored on a 3-yard run, Birmingham Southern found itself within five points with 4:05 left in the third quarter.

The Panthers needed to recapture some momentum, and they did it by putting together an 83-yard, 12-play drive that ended with a 16-yard touchdown pass from Blair to Hardrick.

The rest of the fourth quarter belonged to Birmingham Southern, though.

The Panthers came right back with what at the time looked like a possibly game-clenching drive.

On fourth-and-six from the Birmingham Southern 35-yard line, Blair threaded the ball in through a pair of defenders for a 21-yard completion to Wesley Hughes to the 14-yard line.

On the next play, though, Blair threw the ball into the end zone, and it was intercepted by Sidarius Gotell.

Birmingham Southern made it to the LaGrange 18-yard line, and when Andrews converted a 35-yard field goal, it was a six-point game.

The Panthers still had the lead, but that changed when Pennington stepped in front of the intended receiver and picked the ball off in stride, and he wasn’t touched as he waltzed into the end zone.

Now trailing for the first time, the Panthers couldn’t do anything offensively.

On third-and-eight, Blair was called for intentional grounding.

It was not only an 11-yard loss, but a loss of down as well, and the Panthers punted, hoping that they’d be able to get the ball back with some time on the clock.

Turns out Birmingham Southern only had to run three plays, and the clock ran out.

LaGrange College will be on the road on Saturday against Berry College.

“I take it upon myself for some poor play calling right there at the end,” Mumme said. “We could have run the ball or something and see where we were on third down before we had to throw it. I think we have a great football team in the making, we just have to step up and overcome this and start getting ready for Berry.”