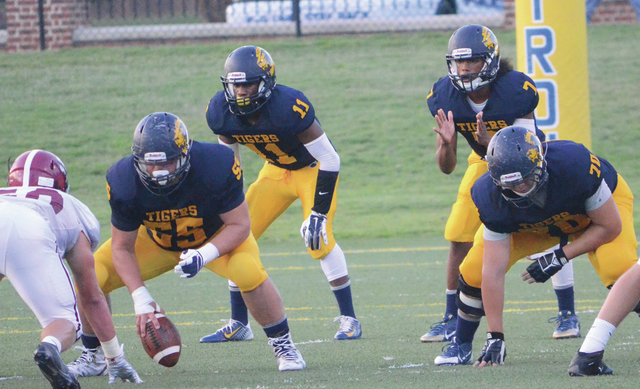 Troup quarterback Ken Truitt waits on the snap during the first half of last week’s game against Northgate. Troup will visit Harris County on Friday. Kevin Eckleberry | Daily News

http://lagrangenews.com/wp-content/uploads/sites/37/2015/09/web1_Troup151.jpgTroup quarterback Ken Truitt waits on the snap during the first half of last week’s game against Northgate. Troup will visit Harris County on Friday. Kevin Eckleberry | Daily News

LAGRANGE – The Troup Tigers are hoping a change of scenery will help them get their season on track.

In their first two games, both played at Callaway Stadium, Troup lost to LaGrange and Northgate by a combined score of 91-13.

On Friday, Troup will make its first road trip of the season, and it won’t be a long one.

Callaway and LaGrange, who have both already played three games, will be off this week.

In eight-man football, Lafayette Christian (3-0) will face its most challenging test so far when it visits Harvester Christian on Friday.

For Troup, it’s been a challenging first few weeks.

In the opener against LaGrange, Troup was only down 14-0 at the half, but it went on to trail 35-0 before scoring a touchdown late in the game, and the final was 35-7.

Against Northgate, Troup was never competitive.

The Vikings scored touchdowns nearly every time they touched the ball in the first half to take a 42-0 lead, and they went on to win 59-6.

Harris County has also had a rough start to the season.

Harris County is coming off two exceptional years, but the team was hit hard by graduation following the 2014 season.

In its season opener, Harris County lost to Central-Phenix City 45-6, and it was beaten by Westside-Macon 30-10 last week.

LaGrange, which is 2-1 following last week’s 20-9 loss to Spalding County, will return to the field on Sept. 18 for a road test against Mary Persons.

Callaway, which improved to 2-1 with Friday’s dramatic, come-from-behind 20-17 win over Heard County, will be at home on Sept. 17 for a home game against Harris County.

Lafayette Christian School moved to 3-0 with Friday’s 43-0 win over Covenant Christian, and it will have a chance to make it four in a row this week.

Harvester Christian, which was off last week, is 2-0 after beating Covenant Christian 64-0 and Shiloh Hills Christian 74-12.