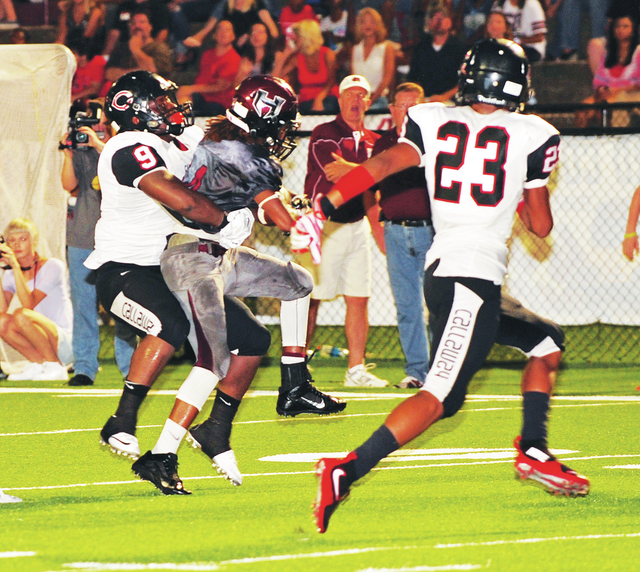 Callaway’s defense gets in position during Friday’s game against Heard County. The defense came up big in the 20-17 victory. Photo by Eddie Sherrer

http://lagrangenews.com/wp-content/uploads/sites/37/2015/09/web1_9-8-CHS1.jpgCallaway’s defense gets in position during Friday’s game against Heard County. The defense came up big in the 20-17 victory. Photo by Eddie Sherrer Callaway’s Brandon Boddie makes a tackle during Friday’s win over Heard County. Boddie forced a fumble late in the first half that helped the Cavaliers get back in the game. Photo by Eddie Sherrer

http://lagrangenews.com/wp-content/uploads/sites/37/2015/09/web1_9-8-CHS2.jpgCallaway’s Brandon Boddie makes a tackle during Friday’s win over Heard County. Boddie forced a fumble late in the first half that helped the Cavaliers get back in the game. Photo by Eddie Sherrer

FRANKLIN – They knew what they had to.

Late in the first half of Friday’s game, the Heard County Braves were deep in Callaway territory as they looked to add to their 17-0 lead.

A situation that was already precarious for the visiting Cavaliers was about to get really desperate if they gave up another touchdown to fall behind 24-0.

During a break in the action, Callaway defensive coordinator Dusty Hubbard got his players together and let them know what they needed to do.

“We took a timeout, and just basically called them over and said we’ve got to get a turnover,” Hubbard said. “We’ve got to force something.”

Senior linebacker Brandon Boddie stripped the ball away from a Heard County ball carrier to force a fumble, and the Cavaliers took over at their own 7-yard line.

“I think it was two plays (after the timeout), Brandon goes in and he gets his hand on the ball and just rips it out,” Hubbard said. “It just worked out perfect. We’d mentioned to them, if they leave it out there, we’ve got to rip it out. We’ve got to force something here. And he made a great play to do that.”

Callaway’s offense took advantage of the turnover with a 93-yard touchdown drive that was capped by a 3-yard scoring run by quarterback Braylon Sanders.

That score cut Heard County’s lead to 17-7 at the half.

Spurred by a dominant defensive effort in the second half, Callaway rallied for a 20-17 victory to win the Pulpwood Classic for the third consecutive year.

In the second half, Callaway got some huge defensive plays from linebacker Devin Brock, who had a pair of interceptions, and Dylan Johnson blocked a field goal.

Linebacker Javoski Leverette, who is having a big senior season, had 14 tackles to lead the Cavaliers, and Johnson had 11 tackles from his safety position.

Brock had seven tackles to go along with the two big interceptions.

Hubbard said in the second half particularly, the defensive effort was tremendous.

“I felt like our kids played really played hard,” Hubbard said. “We challenged them to a man at halftime, and we got after them a little bit. In the second half, we came out and played with just a lot more effort than we had in the first half.”

Leverette, who missed nearly all of the 2014 season after breaking a leg in preseason practice, continues to be one of the defense’s top play-makers.

While Leverette was racking up the tackles Friday night, Brock was making two critical interceptions.

The first of those interceptions came in the fourth quarter and led to Callaway’s go-ahead touchdown.

Then with a little less than four minutes remaining, Heard County was facing fourth down when Brock came through with his second interception.

The Cavaliers were able to get a few first downs and run out the clock and preserve the win.

“The first (interception), he was in man coverage, and he was running with a will route and the guy kind of underthrew it,” Hubbard said. “It just kind of fell right to him. The second one was on the fourth-down play. He made a good pick on both of them. Without those, we probably don’t win the game. That first one, that’s when we scored the go-ahead touchdown. That was just a big-time play.”

After a scoreless third quarter, Heard County got an interception and drove to the Callaway 10-yard line.

Callaway’s defense hung tough and knocked the Braves back, and they eventually settled for a 40-yard field goal attempt.

Johnson got the block, and moments later Sanders found JT Wortham for a 61-yard touchdown pass, and the Cavaliers were within three.

On Heard County’s next possession Brock had his first interception, and that led to a 17-yard touchdown run by Cedric Maynard, and Callaway had the lead for the first time.

“The first play of the fourth quarter, they’re trying a relatively long field goal, and Dylan Johnson blocks it,” Hubbard said. “That kind of changes the momentum, and we go down and score, and the next series is when Brock picks the ball off. We kind of put some drives together offensively when we had to, and bowed our neck defensively in order to keep them out.”

Hubbard wasn’t entirely pleased with the defensive effort in the first half.

“We weren’t giving that extra effort to get off blocks and doing things like that, and they just kind of took it to us,” he said.

In the second half, following some encouraging words from Hubbard during the halftime break, the defense was dominant.

Hubbard said defensive linemen Rashawn Lovelace, Keegan Ramsey, Keegan Woods and Wortham helped control things up front in the second half, Martin and Brock got it done at linebacker, and Johnson was terrific at safety.

Callaway opened the season with a 45-20 loss to LaGrange, and Hubbard said the defense has come a long way since then, due in part to some players moving around.

“I think we’re getting better,” Hubbard said. “We’ve definitely come a long way from the LaGrange game. I feel like we’re getting better, and I feel like a lot of that is we’ve got the feel for who we are. We’ve got some guys in the right spots. We’ve got Dre Martin closer to the line of scrimmage at outside linebacker. Dylan is back at free safety, and we started playing Devin Brock at outside linebacker, which he played some in the LaGrange game, and he’s just gotten better. Making a couple of those changes has really helped us out as far as getting our personnel right.”