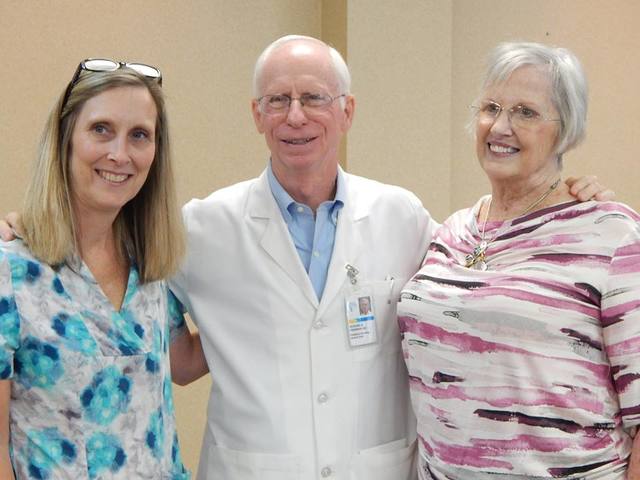 Dr. Richard Freeman celebrates his retirement with Lori McClung, RN, and Marsha Holliday, RN. Holliday served as Freeman’s nurse for 14 years, and McClung has worked alongside Freeman since 1997.

http://lagrangenews.com/wp-content/uploads/sites/37/2015/09/web1_WEB0908Feeman.jpgDr. Richard Freeman celebrates his retirement with Lori McClung, RN, and Marsha Holliday, RN. Holliday served as Freeman’s nurse for 14 years, and McClung has worked alongside Freeman since 1997.

“Dr. Freeman has put his heart and soul into West Georgia Health and cancer treatment for the majority of his life,” said Jerry Fulks, WGH’s president and CEO. “When it comes to care for our patients with cancer, Dr. Freeman stands tall like the giants before him, and we will now stand on his shoulders as we head into the future of cancer care.”

Charlene McClanahan, WGH’s director of oncology services, said Freeman is a compassionate physician who always has the wellbeing of his patients at heart.

“He always goes the extra mile to provide resources to all the patients he serves,” McClanahan said. “He’s a dedicated professional who has devoted his life to serving the people of this area and to encouraging his staff to give of their best in every instance, providing quality care and service to every patient he treats.

“We shall miss him, but we wish him well as he enters this new phase of his life.”

Freeman found himself at a crossroads in life when he completed his residency in 1983 at the Medical College of Georgia. As a young doctor, he had the opportunity to go out into the world and make his mark on medicine at a large metropolitan hospital, but a position treating cancer patients had just opened at West Georgia Medical Center in his hometown of LaGrange.

At the urging of his close friend and mentor, medical oncologist Dr. Julian Duttera, Freeman came home and dedicated his 32-year career to treating hundreds of cancer patients from West Georgia and East Alabama.

“He was a natural fit,” Duttera said. “One of Richard’s most important qualities is his ability to gain the patient’s trust. He is with them during an extremely critical time in their life. He doesn’t just treat the physical symptoms, but he is attuned to their thoughts and feelings. He offers compassion and a dose of humor in addition to the care he provides.”

At his retirement reception Aug. 31, Freeman said returning to LaGrange after medical school was a bit surreal at first.

“It’s been a great ride, and Dr. Duttera is the reason I’m here,” Freeman said. “At first it was a little weird to come home and treat my family members, even treat some of my teachers. I’m so thankful for the opportunity to serve the patients in our community for so many years.”

Lori McClung, RN, who was worked with Freeman for 12 years, said Freeman is genuinely interested in the wellbeing of each patient and sees beyond a patient’s diagnosis and treatment plan.

“He genuinely cares for how that patient is feeling on this inside and how they are responding to the changes that they are going through in their cancer journey,” she said.

He has one rule in his office: Patients come first.

“If a patient calls or shows up in his office, he always makes time for them; he never turns anyone away,” said Daniela Chase, Freeman’s administrative assistant. “He knows that if something is on their mind, it’s important to them at that moment, not the next day.”

Last year local artist Steve Close was diagnosed with head and neck cancer at age 62. He credits Freeman not only with providing his successful medical treatment, but also helping him cope emotionally.

“I was consumed with wanting to know why this was happening to me,” Close said. “There were times when I just wanted to talk about what I was going through and ask questions. Dr. Freeman would pull up a chair, listen patiently and sit with me until all my questions were answered. His honesty and candor put me at ease.”

He is greatly admired by staff members, as well.

“He is an encyclopedia of knowledge,” said Dru Morman, radiation therapist. “He is consumed with reading journals on any new type of cancer treatment, cancer research or technology that might benefit a patient.”

Dosimetrist Martha Hawkins said Freeman has a unique way of assessing each patient.

“He takes everything into consideration and concludes with a question that many doctors would never think about: ‘Is this what I would want to advise if this were my mother?’” Hawkins said.

Wanda Lowe, WGH’s cancer care navigator, said Dr. Freeman is very involved in the community, especially when it comes to support of his patients. He is involved with the American Cancer Society and participates every year in Relay for Life. He also helps with bake sales, bowling tournaments and other fundraisers to benefit the WGH Relay for Life team.

“Dr. Freeman always walks with his patients in the celebratory survivors’ lap at the start of each Relay for Life event,” Lowe said. “It means the world to his patients for him to walk alongside them. There are always lots of hugs and tears as they take that lap together.”