It’s a well-timed break for LaGrange 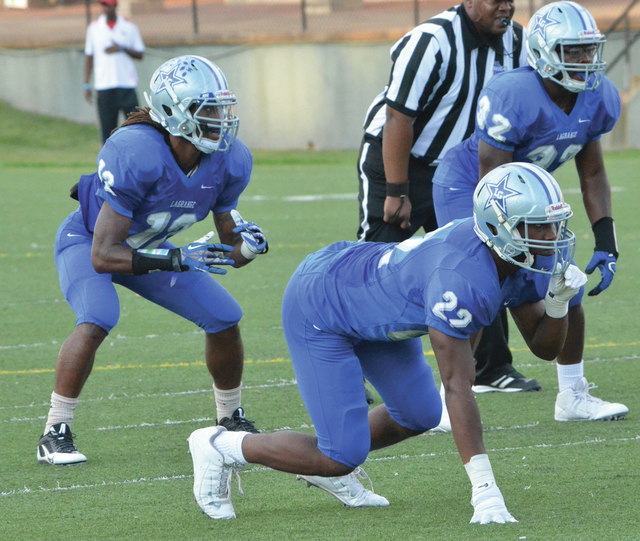 The LaGrange Grangers are off this week after opening with a 2-1 record. LaGrange beat Callaway and Troup before losing to Spalding County. Kevin Eckleberry | Daily News

http://lagrangenews.com/wp-content/uploads/sites/37/2015/09/web1_9-9-LHS1.jpgThe LaGrange Grangers are off this week after opening with a 2-1 record. LaGrange beat Callaway and Troup before losing to Spalding County. Kevin Eckleberry | Daily News Bobby Willoughby, James Clark and Keaote Davis are part of a LaGrange defense that has played well so far. Kevin Eckleberry | Daily News

http://lagrangenews.com/wp-content/uploads/sites/37/2015/09/web1_9-9-LHS3.jpgBobby Willoughby, James Clark and Keaote Davis are part of a LaGrange defense that has played well so far. Kevin Eckleberry | Daily News

LAGRANGE – The LaGrange Grangers aren’t going to go unbeaten, but outside of finishing with a perfect record, everything else they’d hope to accomplish coming into the season is still achievable.

After beginning the season with impressive performances against Callaway and Troup, LaGrange met its match a week ago when it lost to Spalding County 20-9.

LaGrange doesn’t have a game this week, and it will return to the field on Sept. 18 for a game at Mary Persons.

“I told them 14-1 isn’t bad. That’s not a bad year,” LaGrange head coach Dialleo Burks said at the close of practice on Tuesday. “But I told them we could easily go 2-8. So, it’s up to them. They understood that no team is going to come in and lay down, and that they’ve got to come out and play every week.”

Burks was pleased with the reaction of the players to the loss.

“It was tough. And it hurt them. It definitely hurt them,” Burks said. “A lot of them were out here over the (Labor Day) break working. I saw them. That was something we didn’t tell them to do. They just did it on their own. That’s the mark of a good team.”

LaGrange, which had been so proficient offensively against Callaway and Troup, was unable to get on track against a tough Spalding County defense.

LaGrange’s defense played well, but it was on the field a lot.

In the first half, Spalding County only had two first downs, although it did get a 60-yard touchdown pass from Naricuss Driver to Rasheed Marshall in the second quarter.

Spalding County’s other first down in the first half came on a fake punt.

Spalding County led 10-9 at the half, but Burks felt his team would be able to turn things around.

“I thought we were going to play our way out of it,” Burks said.

In the second half, the Jaguars didn’t do anything on their first three possessions, but the fourth time they got the ball A.J. Moses had a 54-yard touchdown run.

Late in the game, LaGrange’s defense came up with a big stand, but Spalding County’s Trey Gregory made a 28-yard field goal to give his team an 11-point lead.

LaGrange’s defense made all sorts of big plays in the second half to keep the deficit manageable.

Emmanuel Mann had a sack early in the third quarter to force a punt, and that was one of a handful of tackles for loss the senior defensive lineman had.

Later in the quarter Jeremiah Wright and Jordan Ragan had tackles in the backfield to thwart a Spalding County drive that looked promising.

In the fourth quarter, when Spalding County made it to the LaGrange 35-yard line, James Clark and Johnathan Olajubutu had consecutive tackles for loss to force a punt.

After the late field goal, LaGrange got a 45-yard completion from LaPerion Perry to Jalen Wilson, but that drive ended when Deaundre Alford came up with an interception in the end zone with 19 seconds remaining.

Whatever outside chance LaGrange had of winning the game was gone.

LaGrange dominated the second half against Callaway and Troup, but it was a different story against Spalding.

Until the final drive, LaGrange had only managed one first down in the second half.

After the two emotional victories over Callaway and Troup, Burks said the players were unable to reach the same level of intensity against Spalding on a Thursday night.

“That game, there was a funk in the stadium, with everybody,” Burks said. “It was tough.”

At times in the first half, LaGrange’s offense that was so explosive the previous two weeks came to life.

In the second quarter, LaGrange went 80 yards for a touchdown, with Jeremiah Wright scoring on a 3-yard run.

Perry, who was so electrifying in the wins over Callaway and Troup as well as the preseason game against Newnan, had runs of 23 and 28 yards on that drive.

Enrique Moody, one of LaGrange’s many offensive weapons, had a 14-yard carry on the touchdown drive, and Amad Ogletree had an 11-yard run.

That touchdown, combined with a 20-yard field goal by Matthew Thomas earlier in the quarter, gave LaGrange a 9-3 lead.

The extra-point attempt following the touchdown was blocked.

After the Jaguars scored a touchdown and made the extra point to take a 10-9 lead, LaGrange drove all the way from its 4-yard line to the Spalding County 37-yard line before the half ended.

Perry had more than 100 yards rushing in the first half, and he only had one incompletion while throwing for more than 60 yards.

In the second half, though, Spalding County’s defense clamped down on Perry and the entire offense.

Perry completed 13-of-24 passes for 148 yards, and he finished with 109 yards on 19 carries, with all but 10 of those rushing yards coming in the first half.

LaGrange has played the whole season without senior offensive lineman Luke Elder, the all-state player who is recovering from knee surgery.

Against Spalding, LaGrange was without injured senior running back Kimani Barnes, who was extremely effective against Callaway and troup.

Senior Undriel Copeland, who Burks was counting on to be a featured running back, hasn’t played at all this season, although he may return next week.

“We’ll come back next week, and we’ll get Undriel Copeland back, who hasn’t even hit the field yet, and he’s one of our top backs,” Burks said.

Burks said the off week has come at a good time after the grind of preseason practice followed by the two rivalry games and the Spalding County loss.

“We had a couple of tough weeks, and doming off a hot summer, where we really went to work, this is a nice little break,” Burks said. “What we’re doing this week is we’re going to take it easy on the varsity guys, and let them get their legs back under them.”

Burks said some of the players will still get some time on the field.

“The JV has a game this week, so we’re going to play those guys, and we’re also going to play some of the varsity guys,” Burks said. “We want to see them in some different situations, so we’ll play them for a quarter, just to see them, and we’ll move on from there.”