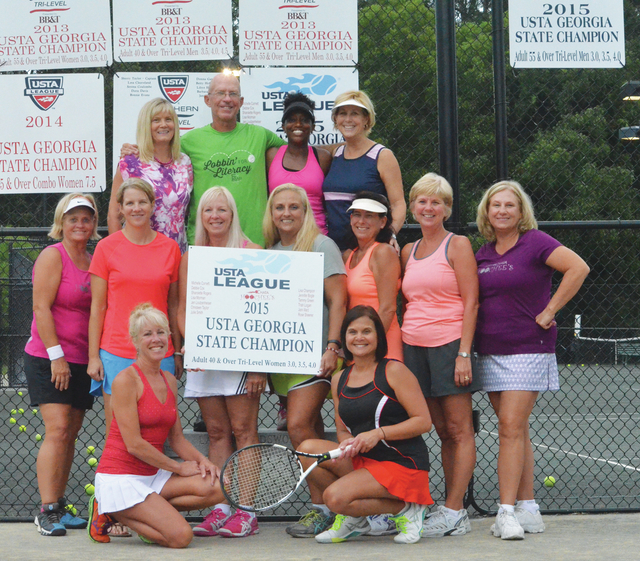 The members of the state-championship team stand with their coach, Bill Champion. Kevin Eckleberry | Daily News

LAGRANGE – They were second to none.

The team’s reward for that victory is an invitation to the USTA tri-level sectional that will be held in Jackson, Miss. from Oct. 16-18.

A 55-and-over men’s team captained by McCluskey Tennis Center head pro Bill Champion also won the state tournament and will compete in the sectional as well.

The women’s team, which is captained by Michelle Cornett, had to overcome some stiff competition at the state tournament to advance.

“We were up against seven other teams. There were eight teams all together,” Cornett said. “So it was tough.”

The teams were divided into two divisions, and the division winners met in the championship match, and the local team came away with the win.

Cornett said many of the players have been playing together for years.

In fact most of the players were members of the 2013 team that won the tri-level state tournament the first time it was held at McCluskey Tennis Center.

The tournament has been held in LaGrange for the past three years, and Cornett’s team has won it twice.

Cornett said most of the team members will be able to make the trip to Mississippi for the sectional tournament.

“There’s just a few of us that can’t, but the majority of the team is going,” Cornett said. “We’re just so excited to get here.”

Cornett said the team is grateful for the support of Champion, who has always been there for the team.

“He has been stellar,” Cornett said. “He’s our team coach. He has been giving me lessons for three years, and some of these women as well. He’s been our team coach, and I have to give him the credit for why we’ve come together and played so well as a group. He’s just been the rock.”