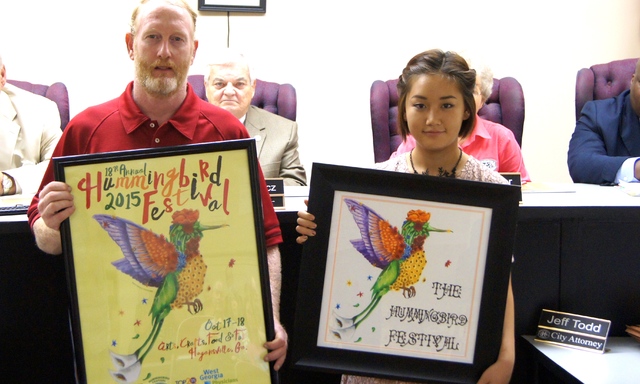 Todd Pike, chairman of the Hummingbird Festival, announced that a painting by Stefany Park, 16, a sophomore at Callaway High School, will be used for this year’s festival.

The annual festival is set for the weekend of Oct. 17 and 18 in downtown Hogansville. It features regional vendors, food, crafts, antiques, music, local artists, open storefronts, rides and activities.

More information on the festival is available at www.hummingbirdfestival.com.

In another matter, council held a public hearing meeting for its millage rate before Tuesday’s regular meeting. There were no comments from the public.

Anyone whose property value has not changed from the last tax year would not be affected by the rate remaining the same.

In other business, council members Jimmy Norred and Jason Stewart were appointed to the Downtown Development Authority board.