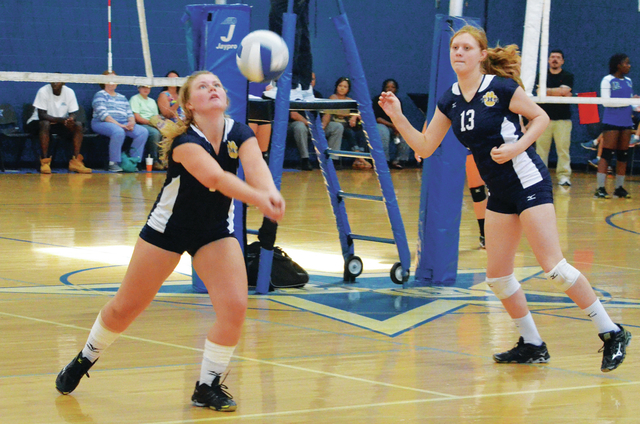 LaGrange’s Madison Lewis knocks the ball over the net during Wednesday’s match against Troup. Despite the tough loss, LaGrange is 12-3 this season. Kevin Eckleberry | Daily News

http://lagrangenews.com/wp-content/uploads/sites/37/2015/09/web1_9-10-volleyball4.jpgLaGrange’s Madison Lewis knocks the ball over the net during Wednesday’s match against Troup. Despite the tough loss, LaGrange is 12-3 this season. Kevin Eckleberry | Daily News LAGRANGE – It was a different setting, but the same result.

Last week, the volleyball teams from Troup and LaGrange got together for the first time, and it was Troup coming away with the hard-fought victory on its home floor.

On Wednesday, those two county rivals met again, and this time LaGrange was the host team.

Once again it was a tight, exciting match, and Troup found a way to secure a second straight win over LaGrange.

After winning the first set 25-15, Troup outlasted LaGrange 25-22 in a back-and-forth second set.

Troup and LaGrange both went on to beat Central-Phenix City later in the day.

For Troup and LaGrange, Wednesday’s matches served as a tune-up for the start of region play next week.

Troup plays in Region 5-AAAA alongside some of the state’s best teams including Sandy Creek and Woodward Academy.

“We’re getting deeper into our season,” Troup head coach Jodi Dowden said. “We start our area play next week on Tuesday. We’re looking forward to running our rotation a few extra times before then, and get some games in and get everybody a few more reps, and try to figure out what we can fix, and what’s working good, and fine-tuning everything right now.”

Knowing the strength of the region, Dowden put together a challenging schedule she hopes has the players prepared for the level of competition they’ll face.

LaGrange will have its hands full with the teams in Region 1-AAAAA, and it will need to finish in the top three to advance to state.

“Our area’s tough,” LaGrange coach Angie Newton said. “We’ve got Columbus and Northside and Harris County, and Shaw’s real good this year. The toughest part of our schedule is coming up with our area matches. We’ve got to step it up right now.”

No matter what Troup does the rest of the season, it will have bragging rights over its county rivals.

On Sept. 1, Troup beat Callaway and LaGrange on its home floor.

The rematch followed a similar script.

After a somewhat comfortable win in the first set, Troup was pushed to the limit in the second set before prevailing.

Troup led 23-22 before winning the final two points of the match.

Dowden said outside hitter Mallory Godfrey had a productive match, as did Jayde Dowden, who delivered a number of aces.

In both matches on Tuesday, Dowden was pleased with the team’s offensive execution.

“We try to spread everything out and keep our offense spread out, so it keeps their defense guessing where the ball is going to go,” Dowden said. “Everybody does a good job of contributing in that offense. We go in with a strategy, and they stick to it. We try to work on our mistakes, and get a better ball the next time, and they always seem to do it. And it seems lately we’ve been on a little bit of a roll.”

Since Troup is usually out-sized by its opponents, Dowden said the key is to “stay more creative offensively.”

“We’re getting some good ball control from our defensive players, and that’s helping out,” Dowden added. “We’re just trying to work on the little things and getting better, and hopefully starting next week we’ll be clicking.”

Despite Tuesday’s loss to Troup, LaGrange is having an exceptional season.

With the win over Central-Phenix City in Tuesday’s final match, LaGrange is 12-3.

Against Troup, Newton said “we just weren’t quite in sync. We had some small errors that were costly. And we need to get all our serves in, too, little things like that. We’re still playing well. We’re still having a great season.”

“They’re both seniors, they’re both middle hitters,” Newton said. “They’re going to be hard to replace.”

Newton said other standout players on Tuesday were setters Madison Lewis and Caitlin Morman along with Aleea Barreras.