New-look Warriors work to get better 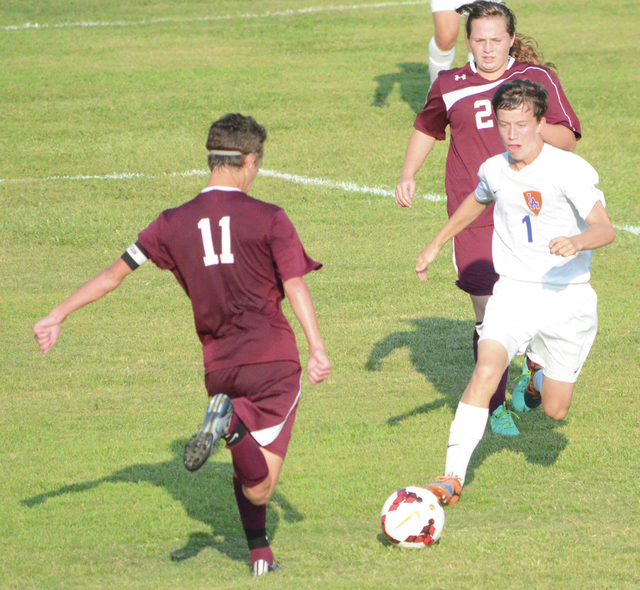 LaGrange Academy’s Jake Keeble advances the ball during the second half of Wednesday’s game against Peachtree. The two teams fought to a 3-3 tie. Kevin Eckleberry | Daily News

http://lagrangenews.com/wp-content/uploads/sites/37/2015/09/web1_9-10-warriors3.jpgLaGrange Academy’s Jake Keeble advances the ball during the second half of Wednesday’s game against Peachtree. The two teams fought to a 3-3 tie. Kevin Eckleberry | Daily News LAGRANGE – The new-look LaGrange Academy Warriors are ready to play for keeps.

After fighting visiting Peachtree Academy to a 3-3 tie in a boys’ soccer match on Wednesday, LaGrange Academy will turn its attention to the all-important region games beginning with today’s showdown with rival Oak Mountain Academy.

All four of the teams in LaGrange Academy’s region will advance to the Georgia Independent Christian Athletic Association state playoffs, but the Warriors will be looking to finish as high as they can to earn a favorable seed when the playoffs begin.

The Warriors have played for a state championship the past two seasons, and they’re hoping to make another title run this year, despite losing a bunch of players from last year’s team.

The 2014 roster included eight seniors, all of whom had been critical members of the team for years.

While this year’s team has six seniors, there are also a bunch of players on the field with limited varsity experience, as well as a handful of eighth-graders who are starting.

With all of the new players, LaGrange Academy head coach Mike Petite was grateful for a seven-on-seven league his team participated in this summer.

Callaway, LaGrange, Troup and Lafayette Christian School also took part in the league, with all of the matches held at Callaway High.

“We’ve worked really hard throughout the summer,” Petite said. “We had the seven-on-seven league that was big for us. All of these guys got a chance to play together without the older players, so that was good.”

With Wednesday’s tie, the Warriors are 3-1-1 as they enter region play.

“Our region’s going to be tough,” Petite said. “We’ve got Furtah, they’re undefeated right now. Brandon Hall is a region opponent for us as well. They’ve only lost one game so far this year.”

Oak Mountain is always a difficult opponent as well, and it’s a match-up that features players who know each other.

“That’s going to be a competitive game,” Petite said. “We know them, and they know us from playing all the sports. These other schools, we don’t play them except in boys’ soccer.”

In Wednesday’s game against Peachtree Academy, which made the trip down from Conyers, the Warriors struggled a bit in the first half and trailed 3-2.

The Warriors pulled even moments into the second half, and they dominated the action the rest of the way, although they were unable to produce the go-ahead goal despite getting plenty of good looks at the net.

It looked like the Warriors might get a penalty kick when it appeared a Peachtree player touched the ball with his hands in the box, but the call wasn’t made.

Zach Callaghan, who also had a goal in the first half, pulled the Warriors even with his goal four minutes into the second half, and that was the final goal.

Will Trotter also had a goal for the Warriors, and Jake Keeble and Griffin Sanchez had assists.

Peachtree scored all three of its goals within 14 minutes of each other in the first half.

On Tuesday, LaGrange Academy was on the road against Covenant Christian, and it won 5-2.

Keeble had two goals, and Callaghan, John Whitlow and Brandon Moncus each had one goal.