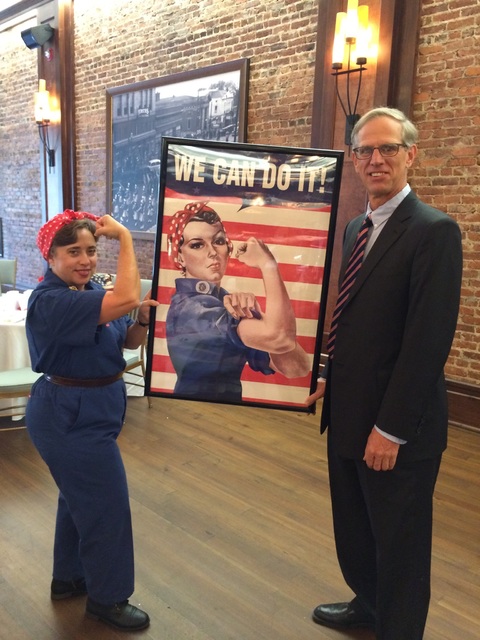 Carol Cain, dressed as Rosie the Riveter, and Steve Will, United Way chairman, kick off the 2015 campaign season Thursday morning at Del’avant.

http://lagrangenews.com/wp-content/uploads/sites/37/2015/09/web1_WEB0910UnitedWay01.jpgCarol Cain, dressed as Rosie the Riveter, and Steve Will, United Way chairman, kick off the 2015 campaign season Thursday morning at Del’avant.

LaGRANGE — United Way of West Georgia kicked off its 2015 campaign season Thursday with a new goal, a new initiative and the help of Rosie the Riveter pushing the community to come together for the United cause.

United Way Chairman Steve Will introduced the new season during an event Thursday morning at Del’Avant in downtown LaGrange, declaring that the community cannot do enough to support United Way.

“What we’re trying to do is never enough, and we must continue to push hard,” Will said.

The goal is down from 2014, which was $1,050,000, according to United Way of West Georgia President Patty Youngblood.

Youngblood said last year fell short of meeting the goal, raising $1,011,846, and this year they wanted to set an attainable dollar amount.

Drawing on the comparison of the women’s war effort during World War II, the United Way used Rosie the Riveter to promote community involvement in the 2015 season.

Carol Cain, a retired educator, flexed her storytelling talents portraying Rosie the Riveter. She acted out several characters exemplifying those women who entered the workforce to help the war effort.

“These weren’t extraordinary women … they were ordinary folk,” Cain said.

Cain made the connection between the women of WWII and the United Way, calling on the guests to “work like Rosie.”

“We need you,” Cain said. “We can prove great things happen when we live united.”

The council is comprised of 14 women leaders for United Way who have given at least $500 to the United Way.

United Way organizations across the country have instated these women councils, which find a cause to focus on, Youngblood said. This council will support the efforts of improving early learning, she said, adding that the council will make a “huge difference” in early childhood education.

“If we can harness active women to really support and champion the cause of early learning, we can turn the tide, we hope,” Youngblood said.

Stephanie Preston, chairman of the United Way Merry Market and member of the women council, said the idea of the initiative is to have a strong backing to do a lot more for early childhood education.

Will added that the council will tend to a gap United Way has recognized in the community.

“We’re always looking on how to put that piece of the puzzle that may be missing together, and early childhood education is one of those areas we’re seeing,” Will said.

With a new goal and a new initiative, Youngblood said United Way hopes to unite the community into taking a closer look at the 25 partners across Troup County and understanding the community need.

“We’re only as strong as our community support,” she said.

Making the comparison back to World War II, Will said in the same way women took on atypical roles to make a difference, so can residents step out of their comfort zones to make those same efforts with United Way to bring a significant change. He pointed back to Cain’s portrayal as Rosie to summarize the mission.

“Can’t we use our hands, our head and our heart to work for the American Red Cross, Harmony House, Personal Aid, Food Closet, the Salvation Army?” Cain asked. “Just as Rosie’s work supported the various branches of the service, you’ve got a chance to support 25 branches … that provide a multitude of services for both the young and the old. Services that take care of those in need, and services that help others find the potential and find success.”