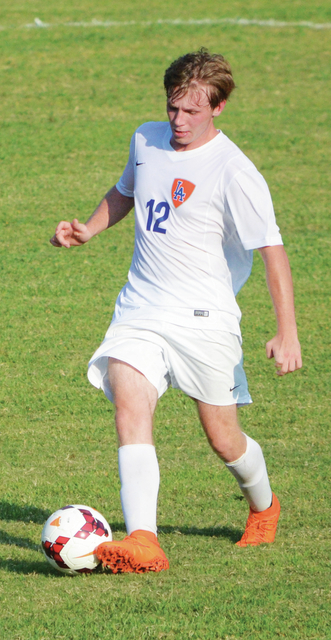 Will Trotter made two goals, including the game-winner, in Thursday’s 5-4 victory over Oak Mountain Academy. Kevin Eckleberry | Daily News

LAGRANGE – A game the LaGrange Academy Warriors seemed to have in the bag moments earlier was suddenly very much in doubt.

Trailing 1-0 in Thursday’s home soccer match against rival Oak Mountain, LaGrange Academy struck for four goals in the second half to build a 4-1 lead.

The Warriors, it appeared at least, were going to roll to a critical region win.

Oak Mountain had other ideas.

Oak Mountain scored three unanswered goals, including one with two minutes remaining, to even things up at 4-4.

“I told the guys we didn’t even put it in cruise control, because we would have at least been traveling forward, we put it in neutral,” LaGrange Academy coach Mike Petite said. “We just shut it down and said, OK, we’re good. We thought we won the game, and we went through the motions for the next 15 minutes. Well Oak Mountain didn’t.”

The story had a happy ending, though, thanks to a big-time kick off the foot of Will Trotter.

Moments after Oak Mountain’s tying goal, there was a foul just beyond midfield, and LaGrange Academy was awarded a free kick.

Trotter took the kick, and somehow the ball managed to make it through a handful of defenders, past the goal keeper and into the net.

The Warriors had the lead, and they held on from there for the 5-4 victory to improve to 4-1-1 overall, and they’re 1-0 in the region.

“You got your money’s worth if you came to the soccer match tonight,” Petite said.

While disappointed that his team allowed Oak Mountain to pull even, it was still a big victory.

In the first half, Oak Mountain scored on its only shot attempt to take a 1-0 lead, which was the score at the break.

LaGrange Academy had a lot of chances to score in the first half, but it couldn’t turn those opportunities into goals.

That changed in the second half.

Jake Keeble, Zach Callaghan, Trotter and Colby Heath each scored to give LaGrange Academy a 4-1 lead.

Back came Oak Mountain with a three-goal flurry before LaGrange Academy scored the game’s final goal.

Trotter, who also scored in Wednesday’s 3-3 tie with Peachtree Academy, has had a big week.

In its three games this week, LaGrange Academy scored 13 goals, and Petite said Trotter had a lot to do with that.

“He’s had three really good games as our attacking center midfielder,” Petite said. “His activity level has been incredibly high. He’s given opportunity after opportunity to our guys up top to score and score.”

LaGrange Academy has another big home game on Tuesday against Brandon Hall in a rematch of a state semifinal game from a year ago.