It’s a battle of the unbeatens 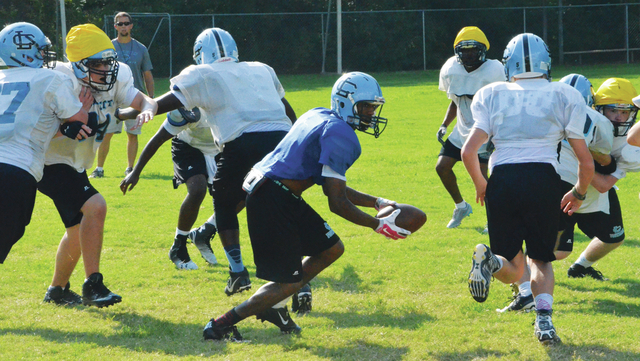 LAGRANGE – It’s been easy pickings so far for the Lafayette Christian School Cougars.

They’ve faced three opponents this season, and they’ve beaten them all handily.

After opening the season with a 35-22 victory over Appling Christian in a game where they led 35-8 at the half, Lafayette Christian handled Solid Rock Academy 51-26 in Week 2.

A week ago, Lafayette Christian improved to 3-0 with a 43-0 home win over Covenant Christian.

Chances are, things will be a bit more difficult today.

In their most challenging test of the season, the Cougars will be in Douglasville to take on a Harvester Christian team that is 2-0 and has beaten its two opponents by a combined score of 138-12.

Lafayette Christian and Harvester play each other every season, and they’re coming off a classic showdown a year ago.

Lafayette Christian outlasted Harvester Christian 29-27 on the way to a 9-1 regular season in 2014.

In 2013 the teams met twice, including once in the state semifinals, with Harvester earning the close victory to make it to the championship game.

Shaw added that “they have a tough place to play. They have a good home crowd atmosphere. It could prove out to be a good game.”

The Cougars were short-handed last week with two of their best players, quarterback Sam Marshall and linebacker and running back Eli Shepherd, out with injuries.

Also in the Covenant Christian game, standout running back Jemi Reed left the game in the second quarter with injury.

All three of those players will be good to go for today’s game.

“We held out Sam Marshall last week, and I think that’s going to pay off big time,” Shaw said. “He’ll get the start at quarterback. Eli Shepherd will be back and looks pretty healthy. Jemi Reed got nicked a little bit in the Covenant game, so we shut him down, but he’s looking good, and looking to be in the action. Having those three will be a big difference for us.”

Shaw said a key to the team’s early-season success has been the performance of the offensive linemen, and he believes those players are ready to have a big game today.

“Our offensive line is healthy, and looking really good,” Shaw said. “I think that’s going to be big for us. I think we’ve got a good matchup up front.”

The Cougars’ offense, even without Marshall and Shepherd missing time with injuries, has been rolling.

Before he left the game last week, Reed had a touchdown run, and Jacob Lueken and Sam Asbell also had scoring runs, and freshman quarterback Landon Whitley threw a touchdown pass to Reed.

Lafayette Christian’s defense, which has been dominant this season, delivered its first shutout of the season.

Shaw said a key for the defense today will be slowing down Harvester’s quick-strike offense.

“We just can’t get big-played,” Shaw said. “That’s been Harvester’s deal with us, is making big plays. If we can stop that this year, I think it’s going to go our way.”