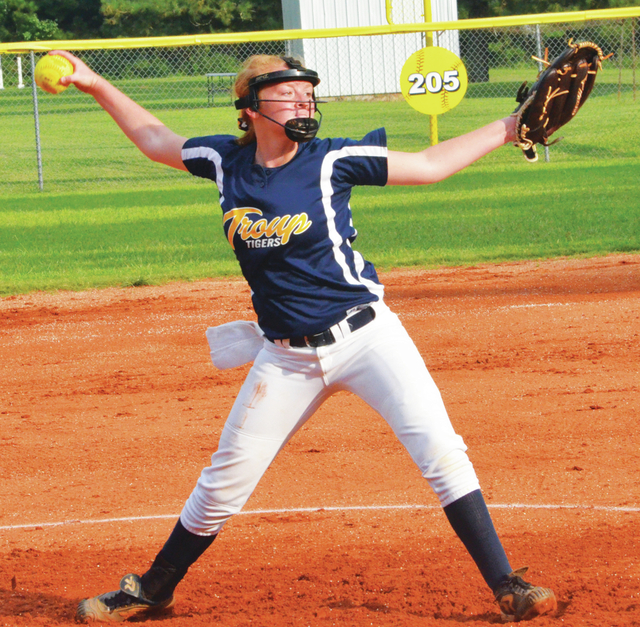 LAGRANGE – On a day when rainouts were rampant, the Troup Lady Tigers managed to get their game in with Fayette County, and they had an easy time of it.

After dropping their previous two Region 5-AAAA softball games, the Lady Tigers (6-5, 3-2 in region play) got back on track in a big way with a 15-1 home victory.

The LaGrange Lady Grangers were leading 5-0 in the second inning on Thursday at Hardaway when it started raining, and the game was called.

Callaway’s home game against Central-Carroll on Thursday was rained out before it ever began, and they will try again today at 4:30 p.m. at Callaway.

At Troup, there was a light rain during the game, but there were no delays.

Troup began its region schedule with a 15-0 road win over Fayette County on Aug. 18, and the story was much the same in the rematch.

The Lady Tigers led 9-0 after the first inning, and they rolled from there.

The game ended after the top of the fourth inning because of the run rule.

Troup began its region schedule with wins over Fayette County and Woodward Academy, but it lost to Carrollton and Whitewater in its next two region games.

The Lady Tigers didn’t figure to have much trouble dispatching Fayette County and moving their region record back above .500, and they didn’t.

Among the offensive stalwarts for Troup was sophomore catcher Maddie Weathers, who was 2-for-4 with a double and three RBIs.

Taylor was the starting and winning pitcher, and Kayla Lane finished things off on the mound.

Troup has played 11 games this season, and it will play nearly half that many games the next two days alone.

Troup is participating in the Trojan Slam in Carrollton, and it will play five games today and Saturday.

“We’re going to get some good some experience,” Troup head coach Blair Shimandle said. “It’s going to be good for them.”

On Saturday, Troup will play Hillgrove, Commerce and Chattooga.

Troup returns to region play on Tuesday with a home game against Sandy Creek.

Callaway (6-7 overall) has struggled to find success in region play so far.

After last week’s 6-1 home loss to Rockmart, Callaway fell to 0-4 in Region 5-AAAA, and it will reach the halfway point of the region schedule today if the game is played.

Central-Carroll leads the region with a 4-0 record.

“If they keep working, and doing the things they need to do, we can still salvage this season,” Callaway coach Ashley Summerlin said. “It’s not over. We just have to keep playing. We’re just bringing these young girls along, doing what we need to do.”

Callaway will begin the second half of its region schedule on Tuesday with a home game against Pepperell.

LaGrange figured to be well on the way to evening up its Region 1-AAAAA record on Thursday against Hardaway.

The Lady Grangers were at the plate and leading 5-0 in the top of the second when the game was called.

A makeup date for the game hasn’t been set.

LaGrange (5-8 overall) fell to 2-3 in the region after losing to Harris County on Wednesday.

LaGrange will be competing in the Trojan Slam along with Troup, although the two local rivals won’t play.

LaGrange will play Alexander at 5 p.m. today before taking on Chattooga at 8:30 p.m.

LaGrange’s games on Saturday are against Commerce, Carrollton and Paulding County.

LaGrange continues its region schedule on Tuesday with a home game against Carver.