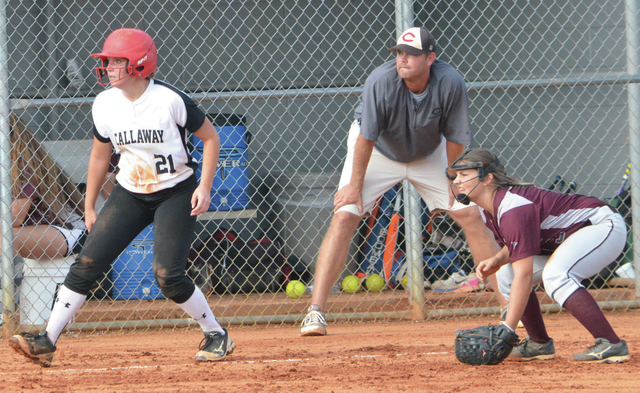 Callaway’s Jessica Perkins gets a lead off third base while coach Ashley Summerlin looks on. Kevin Eckleberry | Daily News

http://lagrangenews.com/wp-content/uploads/sites/37/2015/09/web1_9-13-CHS-softball2.jpgCallaway’s Jessica Perkins gets a lead off third base while coach Ashley Summerlin looks on. Kevin Eckleberry | Daily News

HOGANSVILLE – It was a familiar script.

In their first two Region 5-AAA games of the season, the Callaway Lady Cavaliers were right there with a chance to win at the end, but they ended up losing by one run to Pepperell and Cedartown.

On Friday afternoon in a makeup game against region-leading Central-Carroll, Callaway ended up on the losing end of another close one.

Callaway rallied from a 5-2 deficit to pull even in the fifth inning, but Central-Carroll pushed a run across in the seventh inning to capture a 6-5 victory.

The game was supposed to be played on Thursday, but it was pushed back a day because of rain.

“We just have to learn how to win. That’s the key,” Callaway head coach Ashley Summerlin said. “When we get opportunities we’ve got to capitalize. We’re snake bit right now. We are. That’s no excuse. You have to be able to overcome some adversity, and right now we’re not getting it done.”

Central-Carroll finished the first half of the region schedule with a 5-0 record, while Callaway is 0-5 in region play.

Callaway begins the second half of its region schedule on Tuesday with a home game against Pepperell.

The Lady Cavaliers were coming off one-sided losses to Haralson County and Rockmart, and while they were unable to get a win on Friday, they were at least competitive against the region’s top team.

“They fought back, and they did what it took to make it a game,” Summerlin said. “It just didn’t fall our way in the end. They found a way to get two hits when they needed to, and we couldn’t.”

In the top of the seventh, Central’s Cassie Griffin had a one-out double, and Abbey Cook followed with a base hit to give her team the lead.

Trailing by a run, the Lady Cavaliers got a one-out walk from Brittany Mitchell in the bottom of the seventh, but they were unable to push the tying run across.

After Central scored four runs in the top of the first, Callaway answered with three runs in the bottom of the inning.

Jessica Perkins led off with a single, and two batters later Keshonna Terrell came through with a double.

After Mitchell walked, Oeisha Jenkins had a base hit, and Lydia Bartlett reached on an error with two outs.

Central added another run in the top of the second to take a 5-3 lead, and that’s the way it remained until the bottom of the fourth.

With two outs, Kelly Carlisle reached on a base hit, and Perkins followed with an RBI double, and Central’s lead was down to one.

Callaway tied it with a run in the fifth inning.

Mitchell got things started with a triple, and Jenkins drove her in with a base hit, and it was a tie game.

It remained deadlocked until Central scored the go-ahead run in the sixth inning.