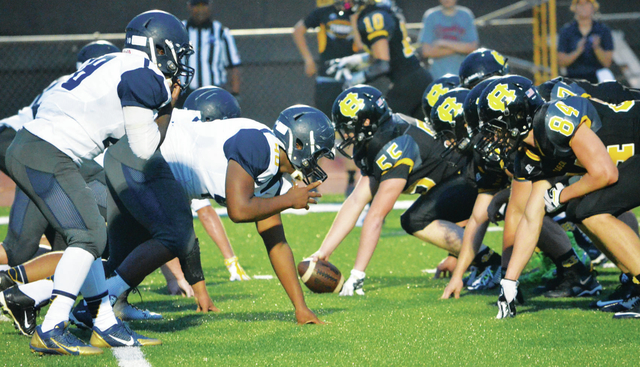 Troup’s defensive linemen get in position before the snap during the first half of Friday’s game. Kevin Eckleberry | Daily News

http://lagrangenews.com/wp-content/uploads/sites/37/2015/09/web1_troup6.jpgTroup’s defensive linemen get in position before the snap during the first half of Friday’s game. Kevin Eckleberry | Daily News

There were some signs of progress for the Tigers, particularly on the offensive side of the ball with Dexter Shealey doing a nice job running things from his quarterback position, but the night belonged to Harris County.

Harris County, which was looking for its first win after two losses to begin the season, claimed a 35-13 victory on a crisp fall evening in Hamilton.

The Tigers fell to 0-3, and they’ll have another shot at that first win when they host Carver on Friday.

Shealey, a senior, made his first start of the season at quarterback, and he guided the Tigers on a six-play, 74-yard touchdown drive to start the game.

After the unsuccessful extra-point attempt, the Tigers were up 6-0, and that was their first lead of the season.

On the ensuing kickoff, Darius Blackmon went 99 yards for the touchdown, and the extra point gave Harris County a 7-6 lead it wouldn’t relinquish.

“We grab the lead there on a really good offensive series that we worked on all week, and we have a lead for about 30 seconds,” Troup head coach Tanner Glisson said.

Harris County led 28-6 at the half, and it scored on the first play from scrimmage in the third quarter to push the lead to 35-6.

Troup’s defense stiffened from there and only allowed a field goal the rest of the way, while the offense put together a 93-yard touchdown drive in the third quarter.

It was a loss, and a somewhat one-sided one at that, but there was plenty to build on for the Tigers.

“We didn’t focus as much on Harris County as we did ourselves (during practice),” Glisson said. “We just tried to see can we get better as a football team, and I think we did.”

The Tigers looked extremely sharp on their first possession.

After the opening kickoff, the Tigers had the ball at their own 26-yard line, and they went to work.

Bonner had a couple of 5-yard runs for a first down, and two plays later, Camren Russell exploded for 39-yard gain to the 24.

After an 8-yard pickup, Shealey covered the final 16 yards for a touchdown, and with 8:15 left in the opening quarter, the Tigers were up 6-0.

The Tigers got a couple of first downs when they got the ball back, but a lost fumble gave the ball back to Harris County at its own 40.

Harris County promptly drove 60 yards for the touchdown, with Tj Chiles scoring on a 3-yard run, and with 2:30 left in the first quarter, Troup was down 14-6.

Once again Troup’s offense did some nice things on the next possession.

Russell and Shealey both had first-down runs, and the Tigers made it to the Harris County 33-yard line before a fourth-down play failed.

Harris County came right back with a 67-yard scoring drive, with D’monte Huling taking it in for an 8-yard touchdown run, and the lead was 21-6.

After a Troup punt, Harris County went 68 yards for another touchdown, and this time it was Juan O’Neal capping the drive with a 1-yard run late in the half.

As the two teams headed to their respective locker rooms, Troup was facing a 28-6 deficit.

Hoping to gain some momentum at the start of the second half, Troup instead allowed a 72-yard touchdown run moments into the third quarter.

The second half was only 21 seconds old, and Harris County’s lead was 35-6.

Harris County threatened to add to the lead after an interception, but Troup’s defense stood firm and eventually forced a turnover on downs.

Troup responded with an impressive 11-play, 93-yard drive that ended with a Russell 5-yard touchdown run.

Bonner did a lot of the damage on the drive with five straight carries that covered 35 yards, and Shealey had a 39-yard run to the 10-yard line.

Michael Young banged home the extra point, and Harris County’s lead was down to 35-13 with 4:41 left in the third quarter.

After forcing Harris County to settle for a field goal in the fourth quarter, Troup put together another nice drive that included Shealey completions of 11 yards to Travis Johnson and 24 yards to Jack Schweizer.

When a fourth-down play failed, though, Harris County got the ball back.

On its final possession of the game after a Harris County punt, Troup made it to midfield before time ran out.