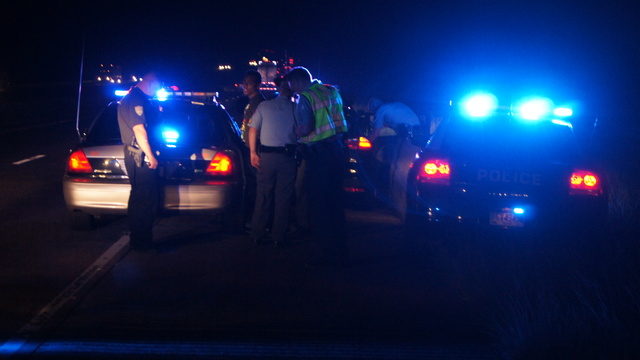 Cameron Jacoby Richardson, 25, is put into the back of a GSP car after allegedly leading troopers and Hogansville police on a high-speed chase.

http://lagrangenews.com/wp-content/uploads/sites/37/2015/09/web1_WEB091315Carchase1.jpgCameron Jacoby Richardson, 25, is put into the back of a GSP car after allegedly leading troopers and Hogansville police on a high-speed chase.

Cameron Jacoby Richardson, 25, of Columbus, allegedly led troopers on a high-speed chase in a black Kia Rio down Interstate 85 southbound through Hogansville.

According to Trooper B. King, Richardson was northbound on I-85 when he was clocked doing 99 mph around mile marker 38 in Coweta County. Richardson allegedly failed to move over for emergency vehicles and King attempted to pull Richardson over, but he exited the northbound lane and led GSP on a high-speed chase in the I-85 southbound lane.

Hogansville police were called in for assistance. They deployed spike strips and GSP performed a PIT maneuver; the car was stopped on the shoulder near mile marker 26.

“We want to thank the Hogansville Police Department for deploying their spike strips,” King said at the scene Friday night.

According to King, the vehicle then stopped on the shoulder of the interstate. Richardson and a female were taken into custody without incident.

King said he noticed the strong odor of marijuana in the vehicle, but he was unable to locate any illegal substances.

All of Richardson’s charges were pending, but King said he will be charged with speeding, attempting to elude, reckless driving, driving with a suspended license and failure to obey traffic control device.

The female passenger was also charged with allowing a suspended driver to drive a vehicle, a misdemeanor.