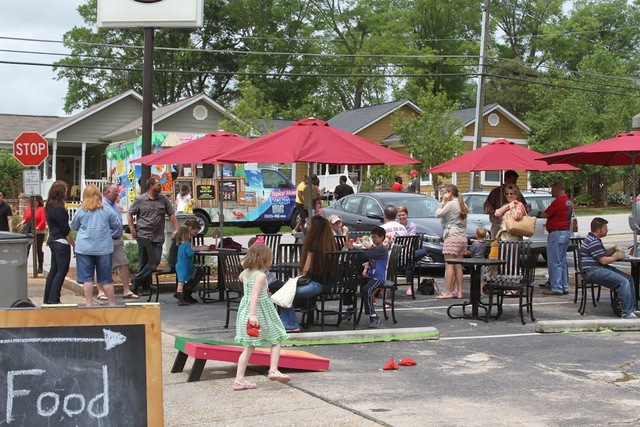 Ben Wheeler, community developer for DASH, helps Servant Scholar Reese Hight check on a tree that was planted in the Hillside neighborhood.

http://lagrangenews.com/wp-content/uploads/sites/37/2015/09/web1_WEB0913ServantSchols01.jpgBen Wheeler, community developer for DASH, helps Servant Scholar Reese Hight check on a tree that was planted in the Hillside neighborhood. This girl is shown in a photograph taken by one of the young photographers who were given film cameras and asked by the LaGrange College Servant Scholars to go out into the Hillside neighborhood to take pictures of anything that interested them. Called the PhotoVoice project, the scholars said it offered the children an opportunity to have a voice and to be heard.

http://lagrangenews.com/wp-content/uploads/sites/37/2015/09/web1_WEB0913ServantSchols03.jpgThis girl is shown in a photograph taken by one of the young photographers who were given film cameras and asked by the LaGrange College Servant Scholars to go out into the Hillside neighborhood to take pictures of anything that interested them. Called the PhotoVoice project, the scholars said it offered the children an opportunity to have a voice and to be heard. Attendees at the spring arts and music festival in the Hillside neighborhood create crafts. Students in the LaGrange College Servant Scholar program helped organize the festival.

http://lagrangenews.com/wp-content/uploads/sites/37/2015/09/web1_WEB0913ServantSchols04.jpgAttendees at the spring arts and music festival in the Hillside neighborhood create crafts. Students in the LaGrange College Servant Scholar program helped organize the festival. People eat at the spring arts and music festival that the students in the LaGrange College Servant Scholar program helped organize in the Hillside neighborhood.

http://lagrangenews.com/wp-content/uploads/sites/37/2015/09/web1_WEB0913ServantSchols06.jpgPeople eat at the spring arts and music festival that the students in the LaGrange College Servant Scholar program helped organize in the Hillside neighborhood. A participant in the LaGrange College Servant Scholar program shows off his ‘Create Dangerously’ T-shirt. People eat at the spring arts and music festival, which the students in the LaGrange College Servant Scholar program helped organize in the Hillside neighborhood.

http://lagrangenews.com/wp-content/uploads/sites/37/2015/09/web1_WEB0913ServantSchols08.jpgPeople eat at the spring arts and music festival, which the students in the LaGrange College Servant Scholar program helped organize in the Hillside neighborhood.

LaGRANGE — It was a lesson about service that came the hard way.

After deciding to make LaGrange’s Hillside community the focus of their final project, the 2014-15 Servant Scholars senior cohort began brainstorming about how they could help improve the area.

They thought they had a great idea to benefit the neighborhood’s children — they’d build a playground.

But the residents didn’t want a playground because the previous ones had fallen victim to vandalism and neglect.

Then the students decided to build a park.

Not so fast, the residents said. They had the same problem with parks.

That’s when the students stopped and listened to what the people in the neighborhood really wanted.

And that’s when the real service began.

The Servant Scholars program launched in 2012 to prepare academically gifted and highly motivated juniors and seniors to become caring and ethical leaders in their communities.

During the first year of the two-year program, each student chooses a nonprofit organization in Troup County in which to serve. At year’s end, the group gathers at its home base in Broad Street Apartments and selects a subject for its joint senior project.

Because so many of the 2013-15 scholars worked as juniors with nonprofits that address the issue of poverty in Troup County, settling on a topic was fairly easy.

The once-thriving mill village in LaGrange had fallen into disrepair. Dependable Affordable Sustainable Housing (DASH) for LaGrange was formed to help bring new life to the area.

Before the scholars could develop a strategy, they had some learning to do.

Ben Wheeler, community developer for DASH, met with them for two days before the start of classes in the fall. DASH has been instrumental in the revitalization of the community, and Wheeler has a deep understanding of the neighborhood and its residents.

The students learned the best way to serve others is to listen and respond to their needs before beginning any work. They decided a good start would be the Hillside Fall Festival.

The neighborhood has hosted the festival for several years, and the scholars saw this as an opportunity to introduce themselves. They collected prizes for games and offered things such as face painting and storytelling to go along with the event’s traditional activities.

But more importantly, they started making connections with the neighborhood’s residents and thinking of ways to serve them.

“Thus began the saga of the playground and park,” laughed scholar Reese Hight. “After finally listening to the residents, we decided together that planting trees in the neighborhood would be beneficial.”

But things didn’t quite go as planned. After meeting with a city planner, they learned trees have a history with the city.

“Large trees interfere with power lines,” Hight said. “The city was always having to go out and cut them back. They decided it would be more efficient to uproot them.”

To find a tree that would be acceptable to the city, the students consulted arborist Sam Breyfogle, who came up with a list of city-approved trees. The city signed off on dwarf crape myrtles to be placed along sections of Jefferson and South Lee streets.

But before they could begin planting the trees, the students were required to get approval from residents who would be affected and to mark utility sites before digging.

Finally, the city approved the project. On a warm spring day in April, students and volunteers planted more than 65 trees. There was such a positive response from the neighborhood that more trees have been ordered for other streets in Hillside.

Hight said the most important part of the project is that the trees brought together neighbors and strengthened the sense of community.

“There are so many things they want for their neighborhood, but there is only so much they can do. We hope this project will give them the confidence to pursue other improvements.”

Rebekah Meadows already knew a lot about the Hillside project she wanted to lead.

“I worked with DASH during my junior year, and we did a scavenger hunt,” she said. “It’s not what you usually think of when you hear the words scavenger hunt. We kind of put our own spin on it, and every week was something different.”

On Thursdays, the scholars gathered to discuss the day’s activities and then set out to become Hillside’s version of Pied Pipers.

“We walked down the street and gathered children,” Meadows said. “We knocked on doors and collected kids who were playing on the street. And of course, we got permission from the children’s parents.”

The purpose of the scavenger hunt was simple.

“It gave the children structured/unstructured time for one hour, one day a week,” she said. “It was a way to get them out of their houses, get them off the streets and give them time to be children, to play games and to learn a little more about their neighborhood.”

Some weeks the children played games and did arts and crafts. But perhaps the most meaningful activity was the PhotoVoice project, Meadows said.

After learning how to load a camera and to take photos, the young photographers went out into the neighborhood to take pictures of anything that interested them. Meadows said the response was amazing.

“These children had never seen a film camera before and didn’t have any idea how it worked, but they still took some awesome photos. They loved exploring and discovering things in their neighborhood they had never seen before.”

PhotoVoice offered the children an opportunity to have a voice and to be heard, a chance they may not have any other way.

The scholars have a special plan for some of the best photographs.

“We want to enlarge them so they can be hung in the Hillside Station,” Meadows said. “We are hoping that the community will realize that these wonderful photos were taken by their children, and will be proud.”

A large component of every Servant Scholar senior project is literature review. Each student was required to read a book that delved into the concept of community. Book topics ranged from the psychology of service to practical suggestions for accomplishing community development and planning.

When the students were confronted with a problem or issue they didn’t know how to handle, they often would refer back to something in their reading assignments.

“Not only were they learning practical and hands-on ways to serve, but also the philosophies behind the methods,” said Jack Slay, director of the Servant Scholars. “It was a valuable lesson on how to meld the two.”

Psychological science major Donicia Blanton used her experiences with undergraduate research to study the importance of structured after-school activities in the development of a child.

“I did an analysis comparing and contrasting several journal articles in search of consistent trends and patterns,” she said. “I was looking for the effects that after-school care, peer interactions and adult interactions have on children and their development.”

Blanton said she learned through her research that children who participate in structured after-school activities such as a specified homework time or dance classes tend to have higher grades and better emotional adjustment to school.

Back at Hillside, the scholars planned a spring arts and music festival, coordinated a Red Cross smoke detector drive, worked with a running club at Ethel W. Kight Elementary School and organized weekly live music performances. They also kept alive something created by the first class of Servant Scholars.

Our Daily Bread soup kitchen was formed in 2013 and continues to operate out of Broad Street Church of Christ, providing free meals every Friday to those in need.

Evan Brasselle interned with ODB during her junior year to prepare for taking it over her senior year.

“We are trying to make it self-sustaining,” she said.

That was the goal of every Hillside project.

“We learned how important it is to give residents a voice in what is going on in their neighborhoods,” Meadows said.

The whole idea is to give the community ownership of the projects.

“If you can do that, the community will be more likely to continue the work,” she said. “The scholars will be gone after a year, but the neighborhood will remain. It’s up to them to carry the work forward.”

Ben Wheeler of DASH said he is seeing evidence of ideas giving birth to other ideas.

“The tree project sparked some other plans in the neighborhood about beautification,” he said. “A few of the stay-at-home moms have organized a Mommy Group, and preparation has begun for next year’s festival.”

The scavenger hunt to gather ideas also has spurred some action.

“There are some interesting things going on with that,” he said. “We’re developing a version for our teens, and we’re talking with partners to help with funding.”

Wheeler said the scholars’ involvement in the community was impressive, and their impact is immeasurable.

“One of the biggest things you need to accomplish that goal is energy, and the students brought that. They were the energy, the gel that brought people together.”