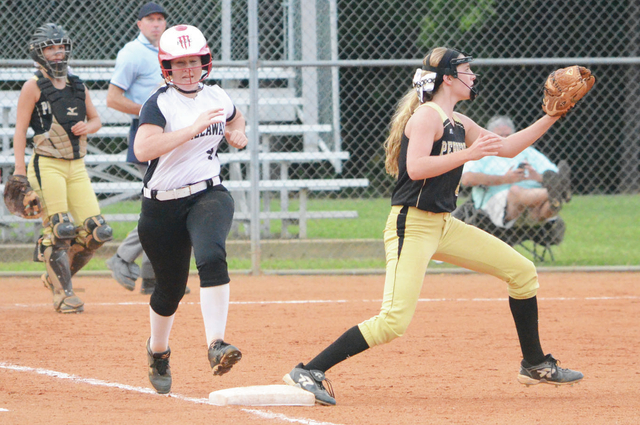 Callaway’s Skylar Rice races toward first base during the seventh inning of Tuesday’s 7-3 loss to Pepperell. Kevin Eckleberry | Daily News

http://lagrangenews.com/wp-content/uploads/sites/37/2015/09/web1_9-16-callaway1.jpgCallaway’s Skylar Rice races toward first base during the seventh inning of Tuesday’s 7-3 loss to Pepperell. Kevin Eckleberry | Daily News

HOGANSVILLE – The Callaway Lady Cavaliers are still searching for their first region win.

On Friday, Callaway fell to 0-5 in the region, but it played well in a one-run loss to region-leading Central-Carroll, so there was plenty of hope coming into Tuesday’s home game against Pepperell.

Those two teams had already played once, with Pepperell hanging on for a 7-6 win on Aug. 25.

Pepperell broke open a close game with five runs in the fifth inning, and it went on to claim a 7-3 victory in the Region 5-AAA game.

The Lady Cavaliers (6-9 overall) fell to 0-6 in the region, and they have four region games remaining in the regular season.

No matter what happens the rest of the way, Callaway will be one of the six teams participating in the region tournament.

The Lady Cavaliers have had some close calls in the region, with three of their six losses coming by just one run, but they’re been unable to break through for a win.

“We’ve only had the lead in two region games this year,” Callaway coach Ashley Summerlin said. “We took a 1-0 lead against Pepperell in the first inning of our first (region) game, and we were up 7-6 on Cedartown. Even in that game, we were down 6-0 before we scored a run. That’s just kind of the way our season’s been. Until we clean up the mistakes, that’s the way it’s going to continue to be. We just have to keep working. That’s all we can do.”

In Tuesday’s game, it was scoreless until the fourth inning when the Lady Dragons scored two runs, and they pushed five more runs across in the fifth inning to go up 7-0.

Callaway got one run in the bottom of the fifth on a Keshonna Terrell solo home run, and it scored two more in the seventh inning, but that wasn’t nearly enough.

“We had runners on every inning except for one, and we were only able to push three across,” Summerlin said.

Trailing 7-1, Callaway made some noise in the bottom of the seventh.

Jessica Perkins led off with a single and Terrell walked, and Terriyunna Dunson came through with an RBI single.

Molly Hubbard added a two-out single later in the inning, but the rally ended with a groundout, and Pepperell walked away with the win.

Callaway has a non-region game at Heard County today before visiting region foe Cedartown on Thursday.