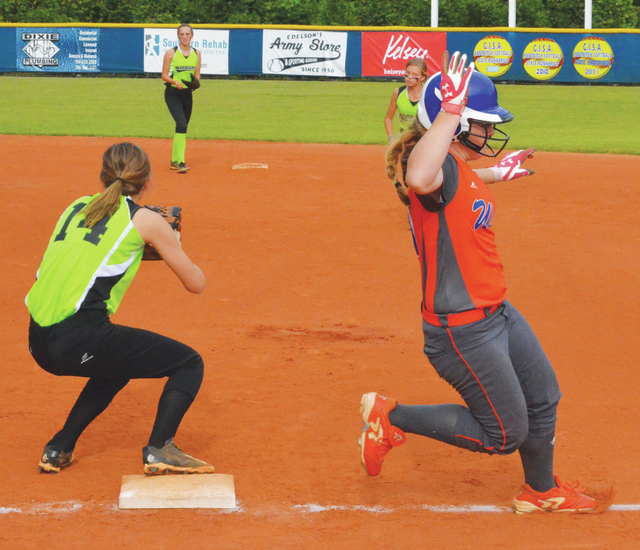 LAGRANGE – When he got a second chance to put the ball in the net, LaGrange Academy’s Mason Brown made it happen.

Late in Tuesday’s region showdown between LaGrange Academy and Brandon Hall, Brown had an excellent scoring chance in a tie game, but he was unable to convert.

“He couldn’t have been five yards away, and he kicks it over, with no one anywhere near him,” LaGrange Academy coach Mike Petite said. “But he didn’t put his head down, didn’t quit.”

A few minutes later, Brown intercepted a pass intended for a Brandon Hall player, and he let the shot attempt go.

The ball got past the goal keeper to give the Warriors the lead, and they held on from there for the 3-2 victory.

“He just rips one, low and hard about a foot off the ground, and it hits past the keeper,” Petite said. “It was a huge game-winning goal for us. That was a great goal for us, and a big win for us.”

It was a key victory for the Warriors in a rematch of a final four game from last year’s Georgia Independent Christian Athletic Association state tournament.

LaGrange Academy won that game on the way to a second-place finish at state.

With Tuesday’s win, the Warriors improved to 2-0 in region play heading into Thursday’s road showdown with Furtah Prep, which is also 2-0 in the region.

All but one of the goals was scored during a back-and-forth first half.

LaGrange Academy struck first, with Will Trotter scoring on a pass from Zach Callaghan eight minutes into the game.

After Brandon Hall tied it in the 20th minute, LaGrange Academy went back on top four minutes later, with Callaghan assisting on Jake Keeble’s goal.

Brandon Hall scored in the 36th minute to tie it, and it was a 2-2 game at the half.

In the second half, the Warriors found their footing defensively.

While the Warriors played well offensively in the second half, they didn’t score until there were two minutes remaining in regulation.

It was Brown, a sophomore and a newcomer to the team, who struck the decisive blow.

“He’s a raw soccer player, and it’s his first year playing for us,” Petite said. “I needed his athletic ability out there. I put him up top, and said just fight for balls.”

He fought for a ball at the end and made the goal.

SOFTBALL: After watching a four-run lead disapper in the top of the seventh inning of Tuessday’s game against Oak Mountain, the LaGrange Academy Lady Warriors scored a run in the bottom of the inning to win it.

Felicity Liechty came through with the game-winning hit for LaGrange Academy.