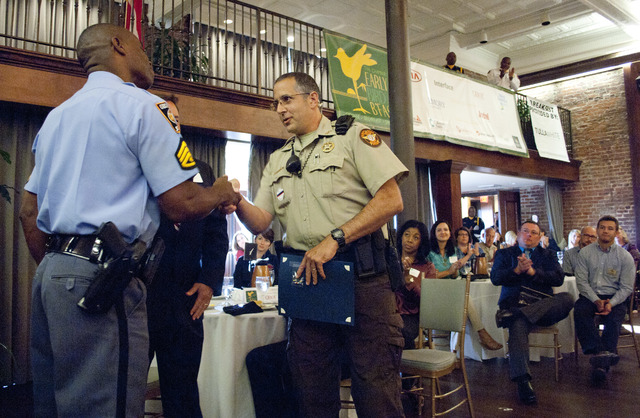 Event host Georgia State Patrol Sgt. Maurice Raines, left, shakes the hand of Troup County Sheriff’s Deputy Stephen D’Angelo as he receives the LaGrange-Troup County Chamber of Commerce Silver Medal of Valor during a ceremony Tuesday morning at Del’Avant on Main Street. The event honors area public safety officials were honored for their contributions and service to the community.

http://lagrangenews.com/wp-content/uploads/sites/37/2015/09/web1_Valor011.jpgEvent host Georgia State Patrol Sgt. Maurice Raines, left, shakes the hand of Troup County Sheriff’s Deputy Stephen D’Angelo as he receives the LaGrange-Troup County Chamber of Commerce Silver Medal of Valor during a ceremony Tuesday morning at Del’Avant on Main Street. The event honors area public safety officials were honored for their contributions and service to the community.

“Public safety officers are routinely called upon to perform miracles and to do the impossible,” said Libby Willingham, chamber chairperson. “Today is our opportunity to say thank you and reassure them that they have our respect.”

The event, organized annually and in its third year, highlights the accomplishments of law enforcement officers, firefighters, emergency medical responders and 911 dispatchers.

Ten awards were presented to officers from the LaGrange, West Point and Hogansville police departments, along with Troup County and LaGrange firefighters, Troup County Sheriff’s deputies and investigators and a Troup County 911 dispatcher.

Deputy Stephen D’Angelo, who responded to a call on Hamilton Road in June where a man allegedly shot at him, received the chamber’s Silver Medal of Valor to the standing ovation of the crowd.

D’Angelo arrived at the man’s house shortly after midnight on June 15 and found him sitting in a carport with an AK-47 rifle. A video taken from D’Angelo’s cruiser appears to show the man firing several shots in D’Angelo’s direction, and D’Angelo returning fire. The deputy struck the man in the elbow and thigh, according to the sheriff’s office.

D’Angelo has worked for the sheriff’s office for about a year and a half, he said. Before that, he worked as a printing press assistant foreman at the Wall Street Journal in LaGrange; he worked there for 14 and a half years before become a deputy, he said.

“It (law enforcement) was always something I wanted to do,” he said. “I love every moment of it.”

Other awards presented were:

• Life-saving Award presented LaGrange Fire Department Firefighter Gary Casper, Sgt. Chris Greathouse and Sgt. Joshua Williams of Engine Company 1, all of whom saved a woman who was having a heart attack.

• Life-saving Award presented LaGrange police Cpl. Craig Wheeler, who stopped a man from bleeding to death after he cut his own throat.

• Communications Person of the Year Award presented to Suzy Noles, director of Troup 911, who retires in October after 40 years of service.

• Public Safety Person of the Year Award presented to West Point police detective Shannon Bavarro, who solved an armed robbery using social media and evidence left at the scene of the crime.

• Public Safety Units of the Year Award presented to the LaGrange Police Department’s Special Investigations and Crime Suppression units, including investigators Darrell Pritchard, Ray Ham, police Sgt. Mark Cavender, Cpl. Curtin Spivey and Officer Jarrod Anderson, all of whom have credited with helping reduce crime in LaGrange by 40 percent between April and June of this year.

• Medal of Merit presented to the Hogansville Police Department for their outreached efforts in the community, particularly aimed at senior citizens and youth, and building trust between police and the community.

More in-depth coverage of each award-winner’s accomplishments will be detailed in the Daily News weekend edition.

All of the events for which awards were given took place between July 1, 2014, and June 30, 2015. Nominations were made by front-line supervisors and a panel of independent citizens chose the award winners, according to a release from the chamber.

Since the beginning of the year, 87 law enforcement have been killed in the line of duty; seven of which occurred in Georgia, according to the National Law Enforcement Officers Memorial Fund.

Sixty firefighters have died on the job, according to the U.S. Fire Administration.