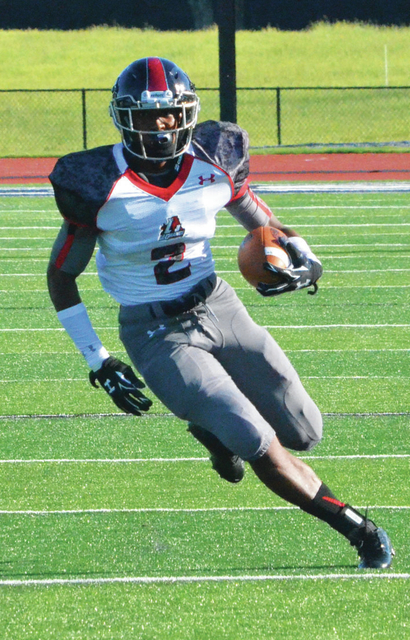 LaGrange College quarterback Connor Blair has thrown for more than 300 yards in each of the first two games. Kevin Eckleberry | Daily News

http://lagrangenews.com/wp-content/uploads/sites/37/2015/09/web1_9-15-panthers1.jpgLaGrange College quarterback Connor Blair has thrown for more than 300 yards in each of the first two games. Kevin Eckleberry | Daily News LAGRANGE – The numbers are fine.

Through two games, the LaGrange College offense has accumulated nearly 800 total yards, and quarterback Connor Blair has thrown for 687 yards.

Much of LaGrange College’s offensive success has come in the first half of the games against Birmingham Southern and Berry, though.

Against Birmingham Southern, the Panthers led 21-3 at the half, and they moved the ball with ease in the first two quarters.

In the second half, the Panthers were held to seven points, and Birmingham Southern rallied for a 29-28 win.

The story was much the same against Berry.

The Panthers had two impressive touchdown drives, and they built a 13-10 lead at the half.

In the second half, LaGrange College was held without any points, and Berry College ended up winning 16-13 in overtime.

The Panthers have continued to move the ball in the second half against Birmingham Southern and Berry, but they’ve had a hard time scoring points for various reasons.

In the second half against Birmingham Southern, LaGrange College was hurt by two late interceptions.

Against Berry, LaGrange College had poor field position throughout the second half.

LaGrange started three of its second-half possessions from its own 1-yard line, 7-yard line and 8-yard line following Berry punts.

On their final possession of regulation the Panthers had great field position at midfield, and they made it to the Vikings’ 1-yard line before they were stopped on a fourth-down play.

After the Berry game, head coach matt Mumme, who is also the offensive coordinator of his “Air Raid” offense, said it’s all about finding consistency.

Mumme said in the first two games “we are making some great plays and then missing on a few. We are young on the offensive side, and just need more consistency.”

Blair, who played sparingly a year ago as a freshman while backing up All-American quarterback Graham Craig, has thrown for more than 300 yards in both of the first two games.

Against Birmingham Southern, he was 30-of-48 for 367 yards with three touchdowns to go along with two interceptions, including one that was returned for the game-winning touchdown.

In the Berry game, Blair completed 36-of-49 passes for 320 yards with two touchdowns and one interception.

Blair has been spreading the ball around to a bunch of different receivers, which is a trademark of Mumme’s offense.

Nine different players caught passes in the Birmingham Southern game, with Josh Hardrick hauling in eight passes, and three of them went for touchdowns.

Ervens Oge also had a big day with eight catches for an impressive 131 yards, good for an average of 16.4 yards per catch.

An astounding 12 different LaGrange College players caught at least one pass in the Berry game, including Oge, who had eight catches for 83 yards with a touchdown.

Untorrey Thomas had five catches for 64 yards with a touchdown, and Patrick Goodin, Hardrick, Marsalis Jackson and Nick Searcy all had four catches.

On the Panthers’ second touchdown drive of the first half against Berry, Blair completed passes to six different receivers, including Thomas, who had a 7-yard scoring grab.

Lavell Meeks only had one catch against Berry, but at the time it looked like it might be the one that would give the Panthers the win.

With less than a minute remaining in a tie game, Meeks had a sensational 45-yard catch at the 5-yard line, but the Panthers were unable to score from there, and they lost in overtime.

While the passing numbers have been there, the Panthers have struggled to get much out of the running game.

Lord Smith is leading the Panthers in rushing, but he only has 58 yards on 11 carries, and Nick Searcy has 44 yards on 17 attempts.

Searcy has the Panthers’ lone rushing touchdown this season.

In the two games combined, the Panthers have run for 181 yards, and they’re averaging barely three yards an attempt.

LaGrange College will look to get that elusive first win when it hosts Ave Maria on Saturday at 6 p.m.