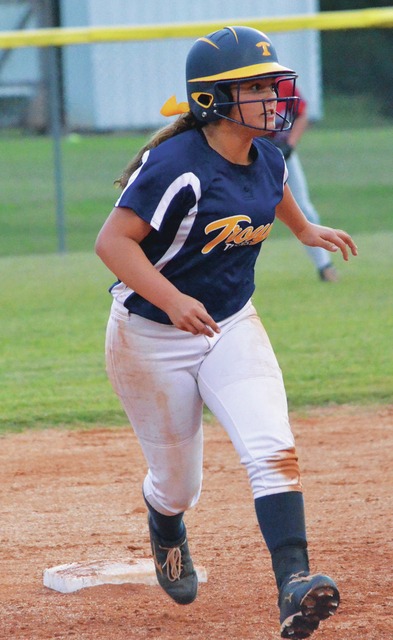 Troup’s Maddie Weathers makes contact for an RBI while Amber Arnold gets a lead off third base during Game 1 of Tuesday’s doubleheader against Sandy Creek. Troup won both games. Kevin Eckleberry | Daily News

http://lagrangenews.com/wp-content/uploads/sites/37/2015/09/web1_9-16-troup1.jpgTroup’s Maddie Weathers makes contact for an RBI while Amber Arnold gets a lead off third base during Game 1 of Tuesday’s doubleheader against Sandy Creek. Troup won both games. Kevin Eckleberry | Daily News Troup’s Madison McCartney gets a lead off second base during Game 1 of Tuesday’s doubleheader. Kevin Eckleberry | Daily News

http://lagrangenews.com/wp-content/uploads/sites/37/2015/09/web1_9-16-troup3-00.jpgTroup’s Madison McCartney gets a lead off second base during Game 1 of Tuesday’s doubleheader. Kevin Eckleberry | Daily News

LAGRANGE – The numbers on the field told the story.

As the Troup Lady Tigers prepared to play Sandy Creek on Tuesday, there were five numbers written in chalk near home plate at the school’s softball facility.

Those were the numbers of the five seniors who have helped Troup’s softball program make tremendous strides over the past four years.

A year ago, the Lady Tigers ended a long dryspell when they made it to the state playoffs, and they’re almost certainly on their way back to state this season.

With Tuesday’s doubleheader sweep of Sandy Creek, Troup is 10-8 overall, and 5-2 in Region 5-AAAA.

The Lady Tigers are in third place in the region, and they still have a chance to climb the ladder with three region games remaining.

Troup head coach Blair Shimandle said the five seniors, including three players who have been starting since they were freshmen, have been a big part of the program’s success the past four years.

“With them, just leading by example is huge,” Shimandle said. “It’s hard to find a group of seniors that can be vocal leaders, and lead by example. They don’t just tell you what to do, they do it themselves. All five of our seniors do that.”

Arnold, Wheeler and Lane are all starters and have been contributing since they were freshmen, while White and Jones are key bench players.

It didn’t take Arnold and Lane long to make an impact as high-school players.

During the 2012 season, Lane was one of the team’s top offensive players, hitting .447 with 11 RBIs and a team-best nine doubles and eight triples, and Arnold hit .421 with seven doubles.

Wheeler’s role on that team grew as the season went along, and she drove in three runs.

Since that season, all three players have been tremendous contributors, and they’re all having big senior seasons.

Lane in particularly has been making the most of her final season of high-school softball.

She’s not only hitting near .500, but she is also the team’s primary pitcher and has been doing a terrific job in that role.

Lane said she’s pleased with the progress that has been made during her time in the program, and she said the team is getting better every day.

“It’s pretty cool to see where we are now compared to where we started as freshmen,” said Lane, who has been able to play with her sister, freshman third baseman Kayla Lane, this season. “I feel like we’re doing better each day when we come out to practice.”

Arnold said she’s “very proud” of what they’ve done the past four years, and she feels the team will be in a great place to continue to succeed next season and beyond.

“I know that (the underclassmen) can still carry this team forward,” she said.

Wheeler, who came into her own as a sophomore when she hit over .400, said the years have flown by.

“When we look back, it feels like we were just in ninth grade,” she said. “It went by fast.”

There were games to be played Tuesday, and neither one was competitive.

Troup won the opening game of the doubleheader 8-0, and it rolled to a 14-0 victory in the second game.

In the second game, Troup needed just four innings to dispatch Sandy Creek because of the run rule.

Arnold was on base four times with a triple and three walks, and she drove in a pair of runs.

Hanna Lane also had a triple and she walked twice while driving in a pair of runs, and Weathers had two hits and three RBIs.

Madison McCartney had a double and two RBIs, and Chandler Pritchett had a base hit and two RBIs.

Hanna Lane was the starting and winning pitcher in both games.

She pitched a combined nine innings in the two games, and she had a career-high seven strikeouts in the first game.

Troup will host Brookstone at 5:30 p.m. today before returning to region play with a game at Woodward Academy on Thursday.